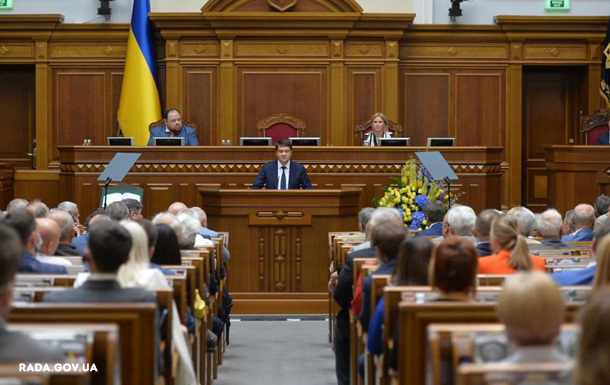 The situation in the combat zone is stable and tense. Last week, Russia-backed militants in violation of humanitarian rules, attacked three Ukrainian servicemen who were to evacuate the remains of the fellow serviceman killed in action. He was killed on July 13, having hit an explosive device near Zaitseve.

The evacuation group was wearing white helmets and received prior approval of the ceasefire. They were attacked when they stood several meters away from the casualty. As the fire started, the group retreated, but the combat medic advanced to help the wounded. The medic was killed by hostile fire.

Is there a threat to the Ukrainian language in Ukraine?

It’s hard to say today, whether in Ukraine children will physically go back to school in September. Still, last week was marked by heated discussions around the language of their schooling. The debate started after MP Maksym Buzhanskyi of “Servant of the People” (Sluha Narodu) party proposed the draft law named “On amending some legal acts of Ukraine on instruction in the official language”.

Buzhanskyi was lobbying the idea to postpone the transition to Ukrainian as the language of schooling for Russian-language secondary school classes, scheduled for September 1, 2020. The concept generally sought to reduce instruction in the Ukrainian language. Amendments brought forward by the draft law would cancel the changes effective September 1, 2020 – requiring that 80 per cent of learning activities for Russian-language classes in the secondary school are held in Ukrainian.

What Buzhanskyi’s draft law suggested. As is required by law (including the Laws “On ensuring the functioning of Ukrainian as the state language”, “On Education” and “On complete secondary education”, the latter was signed into law by President Zelenskyi at the recommendation of the Venice Commission), schools have to increase instruction in the official language for national minorities in secondary and high school.

Separate norms are foreseen for Crimean Tatars – Ukraine’s indigenous people, guaranteeing schooling in the language of the indigenous people from grade 1 to grade 12 alongside learning of Ukrainian.

For the rest of the national communities (referring to instruction in Russian in the first place), at least 80 per cent of instruction starting from the 5th grade has to be in Ukrainian. The transition comes into effect on September 1, 2020. Buzhanskyi suggested postponing it until 2023.

Russian speakers are “discriminated” again. Buzhanskyi’s chief argument was that same rules need to apply to Russian-language schools and schools with the language of instruction of “EU member states”. The MP explains that he wants to remove “discrimination”, when “there are rules for (Russian speakers), and different rules for others (Polish, Romanian and Hungarian speakers).”

“This law is not about language. It is about discriminative norms splitting Ukrainians into categories – there are rules that apply to some, other rules apply to others. It cannot happen that Russian schools have to make a transition to schooling in the official language in 2020, while schools with the language of instruction of EU member states will do so in 2023.”

“Similarly, overall instruction in Ukrainian needs to be equalized based on the clause of the law on complete secondary education for (instruction in) languages of national minorities of EU member states (meaning 20, 40 and 60 per cent respectively instead of 80 per cent – edit.),” the MP explains his draft law.

Arguments of the draft law’s opponents. It is clear that the Russian language in Ukraine is not the “language of a national minority” residing in a certain territory. It is the language of the former empire that is in try to preserve its status in Ukraine and thus uses it as a political tool.

One of the authors of the language law, Taras Shamaida explained that the changes foreseen by the law are completely in line with the recommendations provided by the Venice Commission – the Council of Europe’s body with legal expertise.

“As to the Russian-language classes, teachers have a good command of Ukrainian and children live in respective environment, making it easier for them to make a transition to instruction in Ukrainian. While it will take longer Hungarian or Romanian schools to prepare for the transition to instruction in Ukrainian in accordance with the amount provided by law.”

The author of the law adds that claims similar to the ones brought forward by Buzhanskyi, were already considered by the Constitutional Court in 2019. The Court then ruled constitutional the clause of the law.

Retaliation attempt failed. In the end, the draft law was not considered as on July 16 and 17 people took to protests outside the Parliament. Buzhanskyi’s draft law will most likely be dropped, a source in the “Servant of the People” party is quoted saying. One of the main reasons is lack of money. On June 23, a respective parliamentary committee advised against the draft law, in case it makes its way to the session hall, due to additional spending it would require that was not budgeted for 2020.

New Governor of the National Bank: what is known so far?

On July 16, the Parliament supported President Zelenskyi’s appointment of Kyrylo Shevchenko as the Governor of the National Bank of Ukraine. Shevchenko, head of the state-run “Ukrgasbank”, banker with more than 25-year experience, will replace Yakiv Smoliy. What are the changes to expect in the central bank’s policy?

An independent National Bank, IMF demands. Before making the appointment, Zelenskyi had a telephone conversation with Kristalina Georgieva, IMF Managing Director. The President reassured the IMF chief that the nominee is a technocrat. It’s key to the IMF, Georgieva emphasized, that the new head of the National Bank of Ukraine maintains the central bank independent. It was the IMF’s main requirement in the light of the ongoing USD five billion Stand-By Arrangement for Ukraine. Shevchenko is quoted saying that cooperation with the IMF “is indispensable for further work of our financial system”, he also said he favors “institutional independence of the National Bank”.

Statements by the new Governor of the National Bank. Earlier, Kyrylo Shevchenko criticized the board of directors of the National Bank for holding a too tight monetary policy, decreasing the discount rate too slowly and thus impeding the decrease of interest rates on loans. At the same time Shevchenko commented favorably on the initiative of the government to make loans cheaper.

Before Yakiv Smoliy filed resignation, President Zelenskyi claimed he would put pressure on the National Bank to provide Ukrainians with cheap loans. It seems that Shevchenko will work towards this goal.

When speaking in the Parliament, Kyrylo Shevchenko reassured that he will not let “uncontrolled inflation and currency issuance” take over. It is worth recalling that Zelenskyi recently expressed his disapproval of the actual hryvnia to US dollar exchange rate that doesn’t match the projected rate of UAH 30 per one USD used for calculating the 2020 state budget.

Criticized by Kolomoyskyi? Shevchenko was immediately criticized by MP Oleksandr Dubinskyi of the “Servant of the People” party, allegedly closely linked to oligarch and former PrivatBank owner Ihor Kolomoyskyi. However there is a chance that Dubinslyi’s negative comments are part of the planned intention to create a positive image for Shevchenko with the western stakeholders.

One of the dramatic effects of COVID-19 pandemic is the growth of domestic violence. Russia is no stranger to the problem. UCMC’s Hybrid Warfare Analytical Group puts a spotlight on how Russian TV pop culture fuels the spreading of misogynistic beliefs in the Russian society, read on.