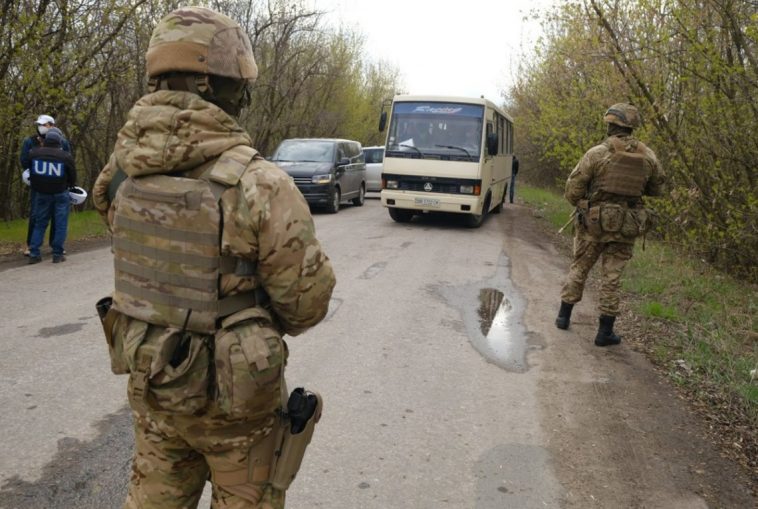 Last week, the situation in the combat zone was tense. On January 23, Russia-backed militants violated the ceasefire in Donbas nine times. Particularly, in the area of responsibility of the Ukrainian operational-tactic command “Pivnich” (North), Russia’s proxies fired from 82-mm and 120-mm mortars, antitank grenade launchers, and heavy machine guns outside Pivdenne.

The Ukrainian troops incurred no casualties. Similar provocations were staged throughout the week.

A swap that never happened: liberation of prisoners seen as Medvedchuk’s self-promotion halted

On January 20-21, Russia and the militants it backs were supposed to transfer a group of prisoners to Ukraine, bypassing the official agreements and turning to the “mediation” by Viktor Medvedchuk instead. The swap is now frozen, and the fate of the prisoners remains unknown.

How did it all start? First reports of the unplanned swap appeared on January 16 on the websites of Russia-backed militants. They would transfer the prisoners to Ukraine using Viktor Medvedchuk, MP of the faction Opposition Platform – For Life (Opozytsiyna Platforma – Za Zhyttia) as a mediator, the reports stated. They did not specify the number of prisoners to be released, but said the group included “women, senior citizens, and individuals with a serious medical condition.”

The Ukrainian delegation to the Trilateral Contact Group said it was unaware of the prisoner list. The Parliament Commissioner for Human Rights of Ukraine Liudmyla Denisova said nine persons had been readied for the exchange. Their way to Kyiv was to start in the occupied territory and include two stop-overs – in Russia’s Rostov-on-Don and Minsk, in Belarus.

The plane never departed. On the evening of January 21, Leonid Kravchuk, head of the Ukrainian delegation to the Trilateral Contact Group within the Minsk process, when asked for a comment by Channel 5, said that the transfer of prisoners was completely halted. Kravchuk confirmed that the initial plan was to fly the captive Ukrainians, but the aircraft never departed.

“It was halted, for very simple reasons. The aircraft that was supposed to fly the people did not depart, not because it had no fuel or anything like that,” Kravchuk said. He also highlighted the problems of the “exchange” presumably organized by Medvedchuk bypassing all formal agreements made within the Trilateral Contact Group or at the highest political level.

“There are simple questions: who is on the flight? Do these people have passports? Are they on the respective registry? It’s not a horseback trip, but a long international route. Initially, they were to depart from Donetsk to Rostov-on-Don, then fly from Rostov-on-Don to Minsk, and head from Minsk to Ukraine. It is already impossible. The aircraft cannot make it,” Kravchuk explained.

“The decision by the Russian Federation to transfer not to Ukraine, but to a private person, Viktor Medvedchuk a group of Ukraine nationals who had been long held captive in the temporarily occupied territory in Donetsk and Luhansk regions, blatantly violates the established mechanisms used to resolve such humanitarian issues,” the statement by the Foreign Affairs Ministry reads.

The Ministry addressed the Russian Federation yet again demanding adherence to the agreements achieved by the Normandy Four, particularly, urging access for the International Committee of the Red Cross to the prisoners and their unconditional release.

Rally in support of Navalny in Kyiv: supporters and critics clash

On January 23, as massive protests erupted throughout Russia, a few dozen people rallied outside the Russian Federation Embassy in Kyiv in support of the Russian opposition leader Aleksei Navalny. As the manifestation was drawing to an end, two dozen men started a conflict with the participants of the rally.

Toward the end of the rally, two dozen men came to the Embassy. They tore down the posters placed in support of Navalny on the fence of the Embassy, and tore the placards from the hands of the rally participants.

A verbal dispute broke out between the rally participants and the newly arrived group. Some of the latter said Navalny had supported the illegal annexation of Crimea. They also tried to provoke the opponents by asking: “Did you fight in the antiterrorist operation?”, “Where were you, when the Crimea was being stolen?”

The dispute led to shoving, the men hit several rally participants. Later, the opponents of the rally were hustled off by the police. Two of them were detained, and later released.

Why is Navalny criticized in Ukraine? The polarized attitude towards Navalny in the Ukrainian society owes to his position on the Russia-occupied Crimea. In 2014, in an interview to the “Echo of Moscow” editor-in-chief Aleksei Venediktov, Navalny said that Crimea will remain part of the Russian Federation and advised Ukrainians “to not fool themselves”. At the same time, Navalny said that “Crimea was seized with enraging violations of international law.”

The Ukrainian MPs teamed up with the delegations of Lithuania, Latvia, Estonia, and Georgia to start the procedure of challenging the credentials of the Russian delegation during the opening session.

PACE’s rules of procedure foresee that the credentials can be challenged on both substantive and procedural grounds. Violation of Article 5 of the Statute of the Council of Europe falls within the definition. It says: “Every Member of the Council of Europe must accept the principles of the rule of law and of the enjoyment by all persons within its jurisdiction of human rights and fundamental freedoms.”

If the initiative is supported, the question will be considered by PACE’s Monitoring Committee or the Committee on Rules of Procedure. The committee may then recommend the Assembly to ratify, not to ratify or ratify the credentials while also suspending some participation or representation rights of the delegation.

To remind, the Ukrainian delegation also initiated the debates on human rights violations by Russia in the occupied Crimea.

This year, PACE will hold its winter plenary session on January 25-29 in a hybrid manner. The delegates can either physically come to Strasbourg, or take part remotely. The Ukrainian delegation chose to attend the session in person.

Weekly overview of Russia’s hybrid influences with focus on Ukraine

UCMC’s Hybrid Warfare Analytical Group prepared a weekly overview of Russia’s hybrid influences with the focus on Ukraine. This week’s picks are:

– Kremlin media call Ukrainian authorities “Russophobic” over the new legislature on the mandatory use of Ukrainian in public sphere.

Drop in transmission rate in past week. The spread of the coronavirus has slowed down thanks to the strict lockdown on January 8-24, the Health Minister Maksym Stepanov said on Monday quoting the weekly report.

“The numbers are optimistic, and are indicative of an improved situation,” the Minister said.

End of strict lockdown starting January 25. Effective January 25, Ukraine returns to the restrictive measures of the orange COVID-19 zone. The Health Ministry will track the situation across the country to see if going back to the “adaptive quarantine” model is reasonable.