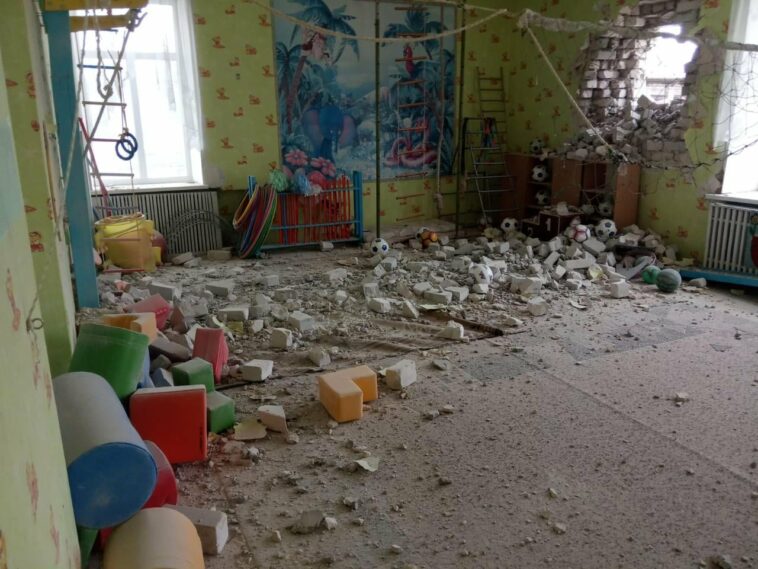 Head of the Hybrid Warfare Analytical Group at UCMC Oleksandra Tsekhanovska commented on the recent events around the shelling of a kindergarten in Stanytsia Luhanska by the Russian hybrid forces in an interview to a German TV channel ZDF.de, the key points of which are laid out in this analytics:

After failing to coerce Ukraine and its Western partners into accepting Moscow’s ultimatum, Russia chooses a path of escalation in Ukraine’s east: on February 17’s morning, the Russian hybrid forces cynically fired at a kindergarten in Stanytsia Luhanska located in the government-controlled territory near the frontline as part of a 40-minute shelling attack. Two adults were shell-shocked while, fortunately, no children received injuries.

This was just one of the civilian objects that the Russian hybrid forces hit on Feb 17. Besides that, a railway station and a locomotive depot in Stanytsia Luhanska, a schoolyard and a gas pipeline in Vrubivka, power line in the villages of Lobachevo and Staryi Aidar were damaged. The attack on the kindergarten, however, was the key event exploited in the Russian disinformation campaign.

The attack and the accompanying disinformation campaign seem pre-planned and coordinated if we look at how fast Russian propaganda reacted. For instance, about an hour after the shelling, Margarita Simonyan, editor-in-chief of Russia Today, the main mouthpiece of Russian propaganda abroad, released what aimed to be a tear-jerking report about “children now unable to go to the kindergarten”.

Later, when it became obvious that the kindergarten was located in the government-controlled area, the puppet “LPR”, Russian and occupation media switched to blaming Ukraine for “staging the shelling in its own territory” specifically for the Western media’s attention to escalate the situation in Donbas. Thus, the key disinformation message undergoes a drastic change: from the “Armed Forces of Ukraine shelling civilians in “LPR” to “AFU shelling its own territory for provocation”.

The goal of the attack itself was to provoke the Armed Forces into returning fire, which would have been heavily covered on Russian media and by various propagandists, such as Russian war correspondent S. Piegov, known for his project WarGonzo and the same-name Telegram channel. Incidentally, it was among the sources that shared the false information about the kindergarten located in the puppet “LPR”.

The incident took place amidst the rhetoric about the “genocide of Donbas” that intensified over the recent days in Russian disinformation, from Russia’s State Duma to the Kremlin-linked and anonymous Telegram channels.

The whole disinformation campaign, originating in occupation sources and pushed via Russian propaganda and its proxies in Ukraine, is fully in line with the traditional rhetoric of the Kremlin portraying Ukraine as an aggressor and blaming it for provocations, the accusations of which are now flooding the Kremlin-controlled media space. As with the notorious fake stories about “crucified boy” and “child killed by a UAV”, the Kremlin’s propaganda aims to exploit emotional topics to create a justification for a potential offensive while discrediting Ukraine’s image internationally.