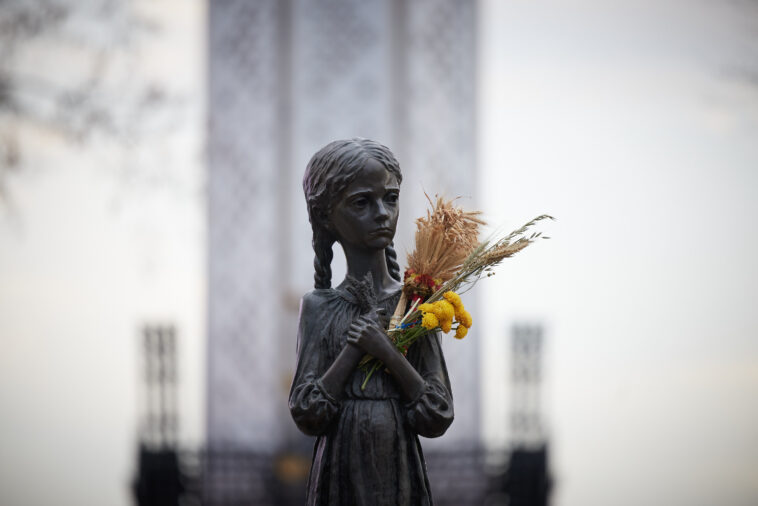 On November 26, Ukraine commemorates the anniversary of Holodomor (1932-1933), a man-made famine, which was artificially provoked in Ukraine by the Soviet authorities and killed millions of Ukrainians. On Nov. 23-24, the parliaments of Romania, Ireland, and Moldova recognized it as genocide of the Ukrainian people. As of 2022, 17 countries have recognized Holodomor as such on the state level. This year, for Ukrainians, the date feels like a tragic deja vu since Russia’s methods of today’s war against Ukraine show nothing but its tendency to repeat historical patterns.

In the 1930-s, artificial famine was a deliberate Soviet way to liquidate a “problematic” class – Ukrainian kurkuls [wealthy peasants] who refused to join and lose their private property. Terror, intimidation, excessive grain procurement plans, and confiscation of food followed by bans on leaving was a policy deliberately chosen by Joseph Stalin, an instrument to suppress a national movement in Ukraine and not lose this land as a part of “Soviet space”. As USSR was actively promoting the image of Ukraine as a European “breadbasket” and trying to cover up the fact of crime against humanity for the rest of the world, the memories of Ukrainian children asking to cut their hands off so they can eat them and physically and morally exhausted parents eating their children were transferred from generation to generation.

In the early 2000s, during Viktor Yushchenko’s presidency the topic of Holodomor started to appear in the global historical discourse as the act of genocide of the Ukrainian people after opening the Holodomor museum in Kyiv, opening memorials and mass burial sites. Those were the days when Russian propaganda started developing its classical strategy – a classic defensive reaction of Russian propaganda to crimes against humanity. Russian propaganda (and, what is even more cynical, its Ukrainian mouthpieces) have been systematically mocking Ukrainian president Viktor Yushchenko for “making Holodomor Ukraine’s national brand”. However, such actions made this Ukrainian tragedy known in different parts of the world instead of being long silenced and forgotten as many other crimes of the Soviet regime, such as the deportation of Crimean Tatars to Middle Asia or altering the ethnic composition of the eastern regions of Ukraine.

Promoting devaluation narratives, such as “there was a famine in Russia too” and “it was simply a bad harvest”, Russia continues its traditional strategy of silencing and whataboutism. This year. the international recognition of Holodomor as a genocide of Ukrainian people is of particular importance, being another step for condemning the Russian-Ukrainian war as a genocidal one. According to the UN Convention on the Prevention and Punishment of the Crime of Genocide, “genocide Involves both mental (the intent to destroy, in whole or in part, a national, ethnical, racial or religious group, as such) and physical elements, such as killing members of the group, causing serious bodily or mental harm to members of the group, deliberately inflicting on the group conditions of life calculated to bring about its physical destruction in whole or in part, imposing measures intended to prevent births within the group, forcibly transferring children of the group to another group”. Some of these practices have already been used against Ukrainians, such as the deportation of about 11,000 Ukrainian children to Russia, the Mariupol blockade, torture chambers, and mass graves on the de-occupied Ukrainian territories.

The fear of famine was transformed in Ukrainians’ collective memory and turned out to be our national trauma. The tradition of collecting croutons “for a rainy day” and piety toward bread as a metaphor for survival are still being transferred from generation to generation. It is also noteworthy that the symbolic meaning of the Ukrainian equivalent of a “rainy day” idiom (“на чорний день”)” is “for a black day”. And Holodomor was precisely that. Many black days.

After Russian occupation, always comes genocidal methods of war – and that is why the aggressor is so persistent in its attempts to erase both our history and the places of memory important for our people, such as the Russian army destroying the Monument to the Victims of Holodomor in Mariupol. The occupiers plan to process the granite which was made into building materials – and, in a symbolic way, to rewrite history. However, when one tries to fight collective memory, dictatorial regimes always lose.