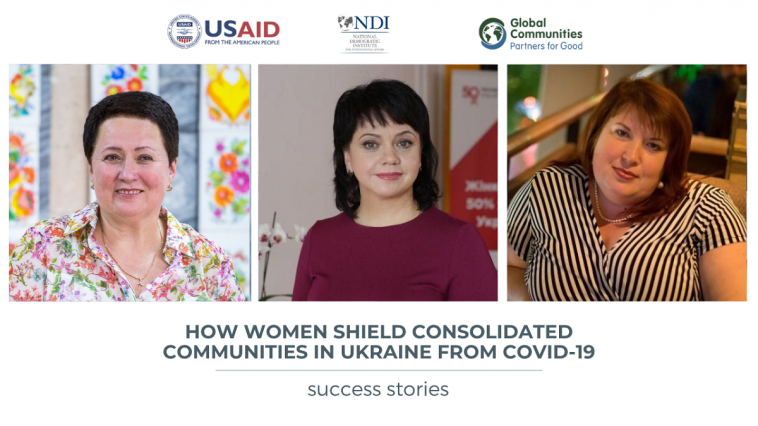 Protecting citizens from the COVID-19 pandemic is an urgent issue around the world. Many countries have struggled to adapt to the new reality and govern in a responsive way. Nevertheless, women leaders in Ukrainian consolidated communities (CCs) are successfully curbing the spread of the virus and mitigating its impact on everyday lives of local people. With funding from USAID, under the Decentralization Offering Better Results and Efficiency (DOBRE) Program the National Democratic Institute (NDI) has trained hundreds of women leaders, including mayors, deputy mayors, council secretaries, elected and executive officials, and civic activists, to apply a gender-sensitive approach to governing, budgeting and planning. Thereby, striving for greater citizen engagement, outreach, and women empowerment.

Here are three examples of women applying their newly gained knowledge and skills to combat the emergency in Ukraine.

Nataliia was elected as First Deputy Head of Oleksandrivska CC in 2016. She leads the group of local officials responsible for ensuring local development programs are gender sensitive. As a graduate of the Women’s Leadership Academy (WLA), together with other active alumnae in her community, she implemented the project ‘Create Yourself’, a self-education space for women in a local library.

Nataliia has served as Head of the local commission on Technological and Ecological Safety and Emergency Situations (TESES commission) for several years. When the COVID-19 pandemic reached Ukraine, she was appointed as Head of the local headquarters fighting COVID-19 under the TESES commission. In April 2020, the first two cases in Mykolaivska oblast were detected in Oleksandrivska CC, which required a swift and efficient response led by Nataliia. Local officials created a checkpoint for temperature screening and protective mask checks at the entrance to the community. All individuals returning from abroad were required to self-quarantine for two weeks. Nataliia initiated data collection on the number of infections, which was stratified based on various criteria, to accurately assess the most vulnerable subgroups and to allocate more resources for their support if needed. She saw this situation as an opportunity to apply the knowledge acquired during NDI trainings on gender responsive governance. The authorities also implemented contact tracing processes, created a mobile group for medical support, organized sewing and distribution of protective masks, and conducted information campaigns on social media.

“It is difficult to reach out to all categories of people in the community. The help of starostas is vital, because they know everyone in their villages. In one village, a starosta ran to each grocery store, organized the distribution of leaflets, and spoke to many elderly people personally. During Easter holidays, we could see the positive result of her work as this village stayed at home while others did not follow safety rules.”

Within three weeks, the spread of the coronavirus in the community was largely under control, with sixteen cases recorded in total. Nataliia said that the crisis ended up being a great learning experience for the community. In the absence of clear guidelines from rayon and oblast authorities, the local authorities had to find their own solutions and learn to effectively communicate and relate to their citizens.

Since 2017, Olha has served as Mayor of Petrykivska CC, which is famous for its unique folklore paintings. Among other initiatives, she is leading the creation of a new gender sensitive local program on culture development. Olha represents a new wave of women leaders challenging gender stereotypes.

The TESES commission did not exist in Petrykivska CC prior to the outbreak. Therefore, once COVID-19 reached Ukraine, the first step Olha took was to establish this critical body in her home community. The commission conducted several meetings to coordinate the delivery of essential products and medicine to elderly people.

During NDI trainings, focused on gender responsive budgeting and planning, Olha understood the importance of determining the various needs of different groups of women and men in the community as a precursor for effective governance and fund allocation. Moreover, through active use of social networks, virtual video meetings and phone calls, she maintained constant communication with citizens and coworkers.

From her point of view:

“Communication is not just about informing, but it is about building a dialogue. Our citizens should be engaged in decision making and be active participants when addressing the many issues that emerge. In order to move forward, we all need to feel as though the whole community is one big family, and that each of us is responsible for its development.”

The messaging from Olha and other local officials resonated with local citizens. Volunteers sewed and distributed over 3500 protective masks throughout the community. They also helped the authorities with an additional channel for informing the public with the help of street loudspeakers.

Oksana has served as Deputy Head of Zolochivska CC since 2017. Equipped with a background in healthcare and finance, she is developing a new gender sensitive local program on public health in her community. At the beginning of 2020, she also supported local alumnae of NDI’s WLA with their ‘School of Women’s Public Activity’ project in the CC.

Oksana supervised the immediate response of the community to COVID-19. She directed local budget resources for purchasing individual protective gear for health workers, as well as providing public servants with protective masks, gloves, and disinfectants. A separate challenge was to protect residents and staff in the community center for senior citizens. Drawing on the skills acquired during NDI trainings on gender responsive governance, Oksana first identified the needs of this vulnerable group of local citizens before proposing solutions. The authorities equipped the workers of the center with protective clothing and conducted trainings for them on how to safely remain in contact with the elder persons who live there. Also, the community website and Facebook group are regularly updated to inform the local population on all recent developments regarding the outbreak.

She identified public procurement as the greatest challenge:

“Even though we managed to find the local financial resources for purchasing protective equipment for COVID-19, obtaining them became a challenge. First, the prices skyrocketed. Second, it became difficult to find the necessary goods, as the demand grew rapidly and suppliers could not keep up the pace.”

Despite this obstacle, the CC continues implementing its anti-pandemic agenda and the adopted strategy seems to work, which is impressive considering the size of Zolochivska CC: the community is one of the biggest in Ukraine, comprising 69 villages.

We hope that these examples illustrate the advantages of gender responsive governance and how this approach enables local governments to act more effectively in order to satisfy citizens’ needs.