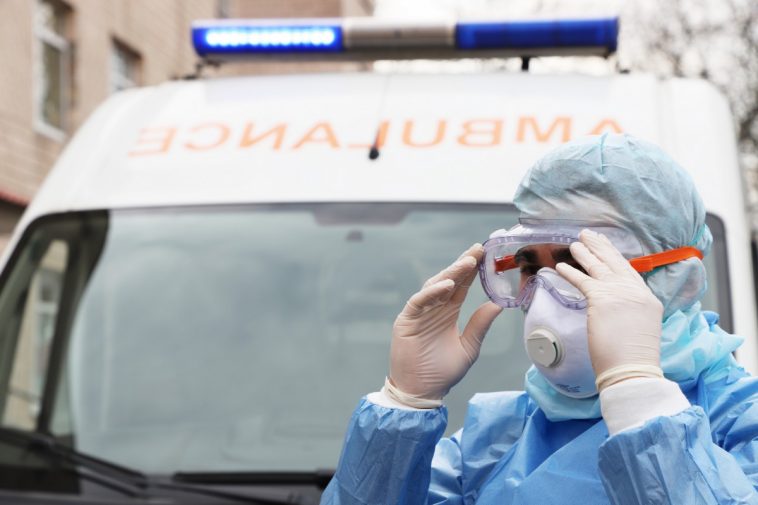 This week, Ukraine ranks as one of the top three countries in the world by daily number of deaths from Covid-19, and is first in Europe by hospital admissions, both in absolute numbers and as a share of total population. Those are the “symptoms” of a new coronavirus wave that has hit Ukraine leading to a shortage of hospital beds in some regions. We take a look at key numbers, hospital situation, and government response.

On the global map of deaths, a current spike in Covid cases in Ukraine also raises concerns. According to Worldometer’s website, on October 19 and 20, Ukraine ranked fourth and third in the world respectively by daily number of deaths, exceeded only by the U.S., Russia, and Romania. The death toll on those two days exceeded that of India, once ravaged by the Delta Covid variant, the UK now recording more than 40,000 daily cases, and Brazil.

By the number of active cases, on October 20, Ukraine ranked seventh in the world and third in Europe with 272,543 cases, exceeded by the UK and Russia, with 1.4 million and 802 thousand cases respectively. The number of tests performed across the UK is much higher.

-record high positivity rate – the percentage of all coronavirus tests performed that are actually positive (42.3 per cent on October 20);

Patient triage is already happening. In recent days, hospital admissions have dipped, as in many regions (especially in Kharkiv and Odesa) hospitals ran out of beds to treat Covid patients, Istrebin said.

During the spring peak, 80,000 beds were made available. This time, 67,000 beds were made available, of which 41,000 beds are taken, the analyst continues. “With 60,000 beds available, hospital admissions are below the levels of the spring wave, as the caseload varies across regions. The data also includes maternity hospitals and children’s hospitals. (…) Not all new hospitals are ready to admit patients, so that growing hospital admissions are constrained by available beds. Patient triage is already happening in many regions,” Istrebin said.

A positivity rate of more than 42 per cent is evident of insufficient testing. The actual numbers can be much higher than officially reported.

Vaccinations on the rise. In recent days, set against a backdrop of an uptick in Covid-19 cases and new coronavirus restrictions in a number of regions, vaccination numbers have gone up. On October 19 and 20, Ukraine administered a record number of vaccine jabs. On October 20, health care workers administered 251,254 vaccine doses (165,649 people received the first dose of a Covid vaccine, and 85,605 people were fully immunized).

Yet, Ukraine has low numbers compared to the EU and the world’s vaccination leaders.

In Ukraine, unvaccinated people are accounting for a majority of hospitalizations.

Covid restrictions tighten. Starting October 21, new rules apply to passengers travelling between the regions. The government requires travelers to show a Covid certificate (confirming vaccination with the first dose or full vaccination), or a negative result of a PCR test or a rapid antigen test performed a maximum of 72 hours prior to travel.

On October 15, Kherson region was the first to enter the red zone since the spring lockdown. On October 18, Zaporizhzhia, Odesa, Donetsk, and Dnipropetrovska regions joined.

On October 23, Sumy region is to be flagged a red zone.