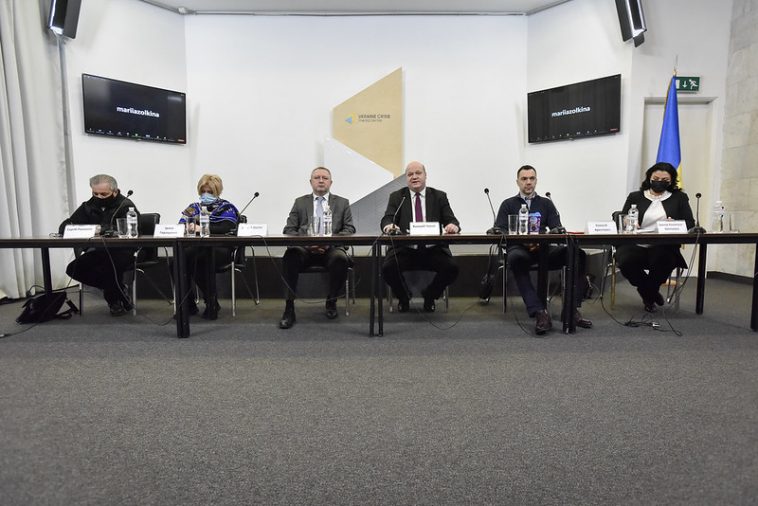 On December 9, 2019, heads of the Normandy Four states – Ukraine, Germany, France, and Russia met for a summit in Paris. A year after the summit, Ukraine Crisis Media Center (UCMC) initiated and held a public discussion on the progress toward implementing the agreements made to achieve peace in Donbas. The discussion was hosted at the press center of Ukraine Crisis Media Center on December 11, 2020.

What is the international legal status of the Minsk agreements? What are the accomplishments of Ukraine and its partners in implementing the agreements? What has Russia achieved in the past year? What is Ukraine’s vision of de-occupation and reintegration? What are the pre-conditions for holding elections in the temporarily occupied territory? Why should a peacekeeping mission be deployed to Ukraine’s state border with Russia as well as the temporarily occupied territory? What would its mandate be? These are some of the questions that the discussion put a spotlight on.

Participants of the talk included representatives of the parliamentary factions and the Ukrainian delegation to the Trilateral Contact Group on peaceful settlement in Donbas. The event was moderated by Valeriy Chaly, Chair of the Board at Ukraine Crisis Media Center, Ambassador Extraordinary and Plenipotentiary of Ukraine.

The Kremlin holds the key to ending aggression and building peace

To Ukrainian society and politicians it is obvious that the major reason why there has been no progress on implementation of the agreements is the position of Russia and its aggression against Ukraine, currently in its seventh year.

Opening the discussion, Valeriy Chaly, Chair of the Board at Ukraine Crisis Media Center, Ambassador Extraordinary and Plenipotentiary of Ukraine highlighted the point:

“The negotiation process lasts long and needs to be approached with serious analytics. I hope that by the end of the discussion we will shape a consolidated position of Ukraine. We can discuss accomplishments made throughout the year after the Paris summit, what Ukraine did and didn’t do. But we all understand that the major reason why the Minsk agreements were not implemented is the position of Russia.”

Ivanna Klympush-Tsintsadze, MP (“European Solidarity”, Yevropeiska Solidarnist faction), Chair of the Parliamentary Committee on Integration of Ukraine with the EU noted that Russia does not live up to its commitments and curbs the peace process:

“A year and a half ago, Ukrainian society believed in the myth that the Ukrainian government benefits from the war. I hope that a year after the summit, it is clear to the leadership of Ukraine that Moscow keeps holding the key to the peace. The Russian Federation has no interest in returning the occupied territories to Ukraine in accordance with international law. The interest of the Russian Federation is to have full control of Ukraine by causing chaos or through direct rule.”

Ivanna Klympush-Tsintsadze added that Russia uses Ukraine as a platform in try to be back in the “big game”. Through its aggression in Ukraine and Syria, the Russian Federation attempts to increase its visibility in the international arena.

Oleksiy Arestovych, recently appointed spokesperson for the Ukrainian delegation to the Trilateral Contact Group, advisor to the chief of the Office of the President of Ukraine agreed that Russia’s position is the major reason why the agreements made in Paris were not implemented. He said representatives of the Russian Federation are consistently pushing two major narratives. Firstly, they attempt to disregard all the agreements signed since the summer of 2014. At the same time, they are being selective and insist on implementation of the accords signed in February 2015 that the UN cemented, as they say. Secondly, Russia tries to impose on Ukraine a direct dialogue with the terrorist organizations operating in the occupied territory of Ukraine.

Valeriy Chaly commented on Russia’s first narrative mentioned by Oleksiy Arestovych. “The Russian side says that the UN cemented the Minsk agreements into international law, but that is not true. They made such an attempt. From the legal standpoint, it’s impossible. In the UN document, you will not find a confirmation that the Minsk agreements are subject to international law. That’s manipulation,” he said.

Andriy Kostin, Chair of the Parliamentary Committee on Legal Affairs (“Servant of the People”, Sluha Narodu faction), representative of Ukraine to the political taskforce within the Trilateral Contact Group in Donbas reacted to the second narrative – the Russian Federation pushing for a direct dialogue between Ukraine and representatives of the occupation administrations.

“We have a clear-cut position. We keep repeating that the Trilateral Contact Group comprises Ukraine and Russia, and is moderated by the OSCE. When Russia attempts to present itself as a moderator or intermediary, it makes no sense. The conflict is between the Russian Federation and Ukraine. Participants from unrecognized territories can have no recognition. We say to the representatives of the Russian Federation: ‘You don’t recognize the sovereignty of these territories either, why are we wasting time (on suggestions) to dialogue with them?’”

A year after the Paris summit: major accomplishments

Oleksiy Arestovych, spokesperson for the Ukrainian delegation to the Trilateral Contact Group said the progress in the conflict settlement in eastern Ukraine advanced slowly.

“Our delegation reports of a very slow advance. There is progress in operation of the crossing points (on the contact line – edit.). Unfortunately, the progress is very slow, the same goes for the liberation of prisoners. Still, the Normandy format is active and brings results,” Arestovych explained.

He said the Paris agreements are implemented only in part, while the biggest accomplishment is the ceasefire that is relatively holding since July 2020.

Other accomplishments named by the discussion participants include new control points on the contact line, demining efforts and disengagement of the troops.

“Full ceasefire, opening of the two new control points on the contact line, agreed demining and disengagement sites demonstrate that Ukraine is ready to implement the commitments it agreed with the international partners. The fact that Russia does not want to implement any is a marker for the international community and a reason to keep the sanctions,” Andriy Kostin said. “We are glad that the sanctions continue and our partners – France and Germany have a detailed understanding of what’s happening.”

Engaging internally displaced persons from Donbas into the negotiations within the Trilateral Contact Group is an accomplishment achieved in the past year, said Iryna Herashchenko, MP, member of the Parliamentary Committee on Foreign Policy and Inter-Parliamentary Cooperation.

Finally, discussion participants highlighted a shift towards a more proactive stance that the Ukrainian delegation has taken in the Trilateral Contact Group. Serhiy Rakhmanin, MP (“Golos”, Voice faction), chair of the temporary parliamentary commission on the public policy for restoring territorial integrity and ensuring sovereignty of Ukraine said:

“The Ukrainian delegation attempted to be proactive and set its own agenda. It made an attempt to elaborate a number of issues by setting up working groups to project the return of the territories to the Ukrainian government, dissolution of the occupation administrations, withdrawal of the troops, prospects of vehicle registration plates issued in the occupied territory. As a result, we can be clearer in communicating our position to our international partners and gradually leave the Minsk process.”

A year after the Paris summit: major challenges

Alongside the slow progress, the discussion participants emphasized a number of challenges in the past year.

To begin with, the positive developments need to coincide with strategic goals in the interests of Ukraine, instead of being ad hoc, tactical response to Russia’s blackmail.

“Ukraine has approved three more disengagement sites. The military insisted on disengagement in places that are not critical for Ukraine. Disengagement itself is a negative fact having no result for local residents. Disengagement would make sense and have its logic if there was, say, a mid-term goal to create a safety zone or deploy a peacekeeping contingent. There needs to be a full ceasefire. Russians are now blackmailing us with ceasefire conditions,” explained Serhiy Rakhmanin. “Agreements are not to be made to get the green light for the next summit. As for the prisoners, Russians are simply blackmailing us. Some of the prisoners were important for them to swap – Berkut policemen, MH17 witnesses etc.”

The MP highlighted divergence and chaotic release of official statements and stances that deteriorated Ukraine’s image abroad. Particularly, “comments made by Leonid Kravchuk (head of the Ukrainian delegation to the Trilateral Contact Group since autumn 2020 – edit.) on some arguments are often his private thoughts that do not coincide with the delegation’s official position.”

Ivanna Klympush-Tsintsadze added, noting that the fact that the Ukrainian government has no clear communication line has a negative effect on the support provided by the international partners.

“Our international partners do not always understand us. Ukraine stopped clearly communicating its goals, tasks, principles, and security interests. As the discussion shifted from the political Normandy format to the technical format of Minsk, Ukraine is becoming more incomprehensible to our partners. Today, the clarity of Ukraine’s position is lost,” the MP said.

Iryna Herashchenko also listed a number of negative developments that happened in the past year: “Ceasefire is being violated. Liberation of the prisoners is being blocked, it is sometimes unclear who the Ukrainian side is fighting for – what their names and families are, and what they did. Making it public can save their lives and improve their health condition, protect them. The promise to provide access to prisons in the occupied territory to the Red Cross was never implemented,” the MP said.

Herashchenko also emphasized that the Foreign Affairs Ministry was actually excluded from the Normandy format, while the discussion on the deployment of UN peacekeeping forces was halted.

Wrapping up the discussion, the participants agreed that the major curb on the way towards conflict settlement comes from Russia, while Ukraine is living up to its international commitments. It though needs a more consolidated position and a common strategic vision internally. A clear-cut position of Ukraine can reinforce and consolidate the international support to its fight against the Russian aggression.