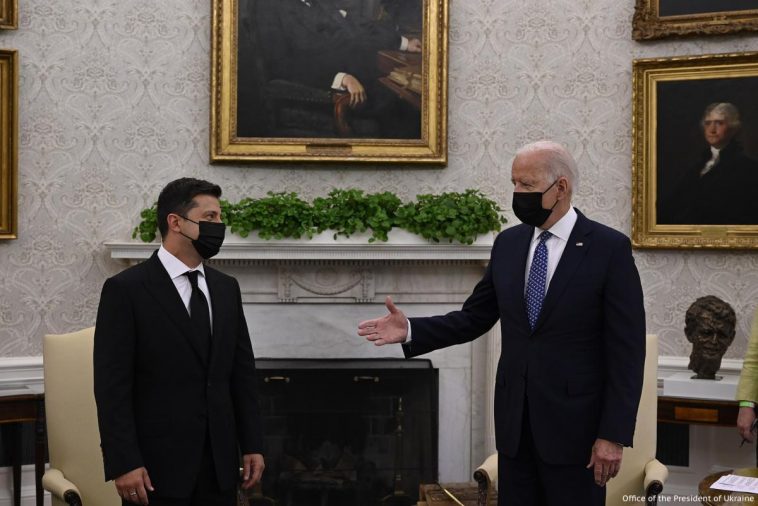 The meeting between the presidents of the U.S. and Ukraine is the major news event of the week in Ukraine. The highly-anticipated meeting promised to be anything but simple, as the Ukraine-U.S. relationship is currently not at its highest point. Kyiv is irritated at Washington’s support to Germany on Nord Stream 2 and its reluctance to broker the delivery of NATO’s Membership Action Plan to Ukraine. Meanwhile, Washington is often dissatisfied with Ukraine reforms, and that may have negative repercussions for Kyiv. Besides, the meeting coincided with a complex moment for the U.S., as it was set against a backdrop of the withdrawal of the U.S. troops from Afghanistan and Hurricane Ida that hit the U.S.’s East Coast.

Still, the meeting has happened. We take a closer look at the achievements and results as seen from Ukraine.

The two-day visit of the Ukrainian delegation to the U.S. had two dozen meetings and events scheduled – from a meeting with the U.S. Department of Energy officials to a public presentation of the Plan of Transformation of Ukraine. Other visits included wreath laying at the Holodomor Memorial and an event at the Arlington National Cemetery. Key was the meeting between the two presidents including the one-on-one part.

Presidents’ meeting extends beyond scheduled time. Talks between Zelenskyi and Biden began as a meeting of the U.S.-Ukraine delegations, and proceeded as a one-on-one meeting between the presidents. Initially scheduled for 40 minutes, it lasted over two hours.

“Instead of the scheduled hour, the meeting between the Presidents of Ukraine and the U.S. lasted two hours. The Presidents took the (U.S.-Ukraine) relationship to a new level,” Minister of Foreign Affairs of Ukraine Dmytro Kuleba commented.

“There have been visits (of the Ukrainian presidents to the U.S. – edit.), and there will be more to come. The visit by Zelenskyi is not groundbreaking. But as the war continues, and the number of provocations and attacks has recently gone up, bolstering defense capabilities and getting security guarantees is significant,” said Valeriy Chaly, Chair of the UCMC Board, Ambassador of Ukraine to the U.S. (2015-2019) in an interview with Hromadske, commenting on the context of the meeting.

“Classic diplomacy says that if a planned meeting was suddenly extended, it means that the parties either found the touchpoints and brought things forward, or stumbled onto the problematic points that require discussion. Either of the scenarios is positive for us,” said Oleksandr Krayev, expert at the think tank Foreign Policy Council Ukrainian Prism in a comment to Hromadske.

Joint Statement. The Joint Statement on the U.S.-Ukraine Strategic Partnership is also longer than the document’s initial draft. The Statement is composed of five sections – security and defense; democracy, justice and human rights; energy security and climate; economic growth and prosperity; and pandemic response and humanitarian assistance. The Statement both reasserts the agreements already in place (for example, the Strategic Defense Framework) and mentions new ones (for example, additional USD 12.8 million in Covid-related assistance).

“Our relationship serves as a cornerstone for security, democracy, and human rights in Ukraine and the broader region. We are committed to Ukraine’s implementation of the deep and comprehensive reforms necessary to fulfill its European and Euro-Atlantic aspirations. (…) Ukraine’s success is central to the global struggle between democracy and autocracy,” the Joint Statement reads.

Text of the Statement was pre-approved by Kyiv and Washington, and remained almost unchanged after the meeting, underscores Serhiy Sydorenko, co-editor-in-chief of “Europeiska Pravda” (European Truth). What the document reflects is not the actual results of the Zelenskyi-Biden talks, but rather a collective idea about Ukraine of the U.S. Government. It also records major expectations of Ukraine that Kyiv agreed to publicly endorse.

Energy security and Nord Stream 2. After the U.S. and Germany reached an agreement on Nord Stream 2, Washington’s line on the Russian pipeline seemed to be pre-defined. But Kyiv is still hopeful that completion of Nord Stream 2 can be prevented, or at least that the risks can be minimized.

“There may be disagreement between the strategic partners – the two countries that work together on many issues,” former U.S. Ambassador to Ukraine William Taylor told Hromadske. The U.S. Congress, like Ukraine, does not believe that Nord Stream 2 is irreversible and tries to stop it with sanctions, William Taylor added.

Emblematic was the meeting between President Zelenskyi and the U.S. Secretary of Energy Jennifer Granholm, one of the first meetings on the U.S. visit. Granholm represented the U.S. at the Crimea Platform summit held ahead of the 30th anniversary of Ukraine’s Independence in Kyiv. On the margins of the summit, the U.S., Germany, and Ukraine held tripartite consultations on Nord Stream 2.

Energy chiefs of the U.S. and Ukraine, Jennifer Granholm and Herman Halushchenko signed the Joint Statement on Enhancing Bilateral Energy and Climate Cooperation that also underlines energy diversification that is key to energy security of Ukraine. The parties will also proceed with the talks on construction of a unit of the Khmelnytskyi nuclear power plant.

The Joint Statement on the U.S.-Ukraine Strategic Partnership reads: “The United States and Ukraine continue to oppose Nord Stream 2, which we view as a threat to European energy security. The United States intends to continue using measures envisaged in legislation and energy diplomacy, including through the recent appointment of a senior advisor for energy security, to maintain Ukraine’s transit role and security of supply during this period of energy transition and to prevent the Kremlin’s use of energy as a geopolitical weapon. The U.S. and Ukrainian governments support efforts to increase capacity for gas supplies to Ukraine from diversified sources.”

Security and defense. The U.S. Secretary of Defense Lloyd Austin and the Defense Minister of Ukraine Andriy Taran signed the U.S.-Ukraine Strategic Defense Framework, a key agreement between the two states. Priorities of the five-year document include cooperation on cyber security, in the Black Sea, closer partnership of defense intelligence communities, and the U.S. assistance to Ukraine in the defense sector reforms.

The Plan of Transformation of Ukraine includes over 80 projects, its overall budget is USD 277 billion, Zelenskyi said. The plan is to be funded through international assistance programs, loans, and investment. The President hopes that the U.S. will “actively join the implementation of the ambitious project.”

Ukraine is to present the practical steps for implementation of the plan this autumn, ahead of the meeting of the Strategic Partnership Commission co-chaired by Ukraine’s Foreign Minister Dmytro Kuleba and his U.S. counterpart Antony Blinken. The commission has not convened since 2018. The upcoming meeting and the mention of the Plan of Transformation in the Joint Statement shows that Washington has approved the initiative.

NATO. At the same time, there were weaker areas of the meeting. The Joint U.S.-Ukraine Statement proved what “Europeiska Pravda” earlier revealed referring to sources in diplomatic circles. Current U.S. Administration is not prepared to make practical steps to support Ukraine’s accession to NATO membership.

The section “Supporting Ukraine’s Euro-Atlantic Aspirations” of the Joint Statement reads: “The United States supports Ukraine’s right to decide its own future foreign policy course free from outside interference, including with respect to Ukraine’s aspirations to join NATO.” The U.S. remains “committed to assisting Ukraine with ongoing reforms”.

At the same time, the Statement does not mention the U.S.’s support to the delivery of NATO’s Membership Action Plan to Ukraine, or commitment to help Ukraine on the way towards NATO membership. There is no common phrase that “some day, Ukraine will become a NATO member” either. It gives Ukraine understanding that part of the U.S. administration is skeptical of Ukraine’s further accession to the Alliance.

Kyiv planned it as one of the key discussion topics of the talks. “Kyiv wanted to figure out what makes the U.S. administration cautious: are those attempts to not irritate Putin? Or is it about the willingness to sacrifice Ukraine’s interests to avoid the disagreement with the European partners, namely Germany? Or is it something else?” says Serhiy Sydorenko of “Europeiska Pravda”.  “We don’t know what the answers of the U.S. President to Zelenskyi were. At the press conference in Washington, the Ukraine President only confirmed that he asked his U.S. counterpart those questions and suggested the U.S. takes a more active stance,” he added.

Answering the questions at the press conference, Zelenskyi said: “We talked a lot about that. We spent much time talking about NATO. We had the arguments that had not been previously discussed. (…) I feel that the President supports Ukraine in its aspirations of NATO membership. But I find it hard to say what the actual path will be.”

Experts and diplomats assessed the meeting positively. “In general, the high-level meeting was positive. The key directions it outlined correspond to our national interests. I do not think though that it was way too polite,” said Volodymyr Ohryzko, Minister of Foreign Affairs of Ukraine in 2007-2009 in a comment to “Novoe Vremya” (New Times). “The U.S. spoke of the occupied land in Donbas and Crimea in a clear and unambiguous manner. [The United States does not and will never recognize Russia’s purported annexation of Crimea, the Joint Statement reads – edit.] The word ‘never’ is rarely used in diplomatic documents. That is a form that is not typical of diplomatic documents. It is repeated in the Joint Statement. That is a very serious political signal for the Russian Federation that hopes that it will be forgotten. It won’t. That is an act of very solid political support,” Ohryzko explained.

One should not overestimate the Statement, others say. “The U.S. Administration has not yet decided how involved they will be, if at all, in the negotiations on Donbas,” said Alyona Hetmanchuk, director of the New Europe Center in the opinion column for “Europeiska Pravda”. “Zelenskyi predictably offered Ukraine’s view of the U.S.’s involvement. (…) Some representatives of the administration have signaled interest to discuss the subject. However the White House will unlikely prioritize the subject knowing that there can be no quick gains, while Biden does not need yet another uncertain story in foreign policy in addition to Afghanistan. Biden’s fear of being dragged into a new conflict also plays against the prospects of U.S.’s involvement,” Hetmanchuk said.