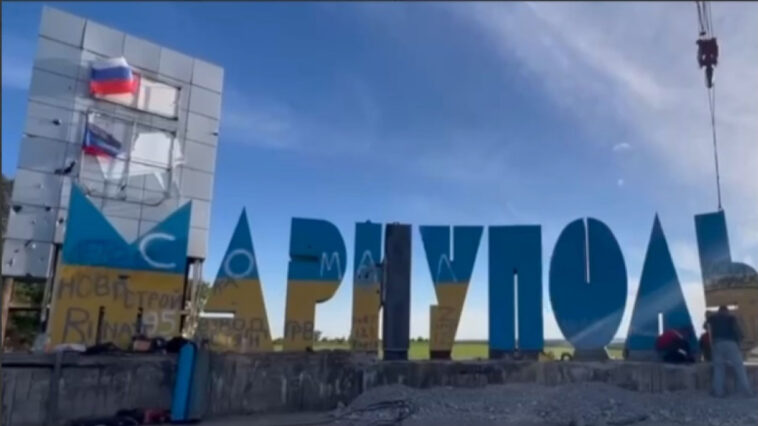 Russian invaders continue to stage a picture for their zombied population. And the situation in Mariupol is getting worse every day.

Russians stopped the practice of “filtering” the locals inside Mariupol. Now all those who have not passed the filtration have to go by organized buses to the filtration camps in the villages Nikolske or Bezimenne. Petro Andriushchenko, adviser to the mayor of Mariupol, told about it in his Telegram channel.

In these filtration camps at the compact accommodation point, Mariupol residents have to wait several days for filtration with the risk of being deported to Russia.

“You can pass the filtration on your own by car to Dokuchaevsk, Donetsk region, but it takes a week to get a permit to move to the occupation commandant’s office in Mariupol. De facto, the city remains closed to even Russia,” Andryushchenko added.

The adviser to the mayor told and showed how the stele “Mariupol” was dismantled from the side of Donetsk. The cost of construction of this stele was UAH 3.5 million. Russians inserted a metal stick near the letter “i” to make the letter “и” (in order to change the spelling from Ukrainian to Russian).

Bodies under the rubble in the dump

The occupation authorities of Mariupol report that the epidemiological situation is under control, the blockages have been dismantled, garbage has been removed from the streets, and the sea is clean. But the residents of the city are constantly recording and sharing the facts of the terrible situation in the city. There are mountains of garbage everywhere, Russians are demolishing houses with the bodies of residents and just throwing them away.

“The occupiers finally switched to the practice of demolishing houses and refusing to search for the bodies of those killed under the rubble. We will never know how many Mariupol residents died and still remain under these blockages. Together with the garbage, they will be buried at the Left Bank garbage collection site,” sadly said Andriushchenko.

According to him, in the Left Bank district on Moskovska and Volodymyrska streets there are many houses that were affected by the shelling of the Russian “Grads” in late February – early March. People were then cut off from the opportunity to go to a relatively safe place (at that time) in the center of Mariupol.

Russians began to issue pensions from Russia in Mariupol. They have registered about 47 thousand retirees who are ready to receive benefits. Andryushchenko emphasizes that about 10,000 more Mariupol residents have not applied for a pension from the occupiers.

In terms of rubles to hryvnia, the pension is UAH 2.6 thousand (less than 100 USD). Queues for money are already matched till the end of the month.

“Ready for work and defense”

In Mariupol, a physical training program is being introduced, which was created in Soviet times. According to the mayor’s adviser, at the end of June the Department of Physical Culture, Sports and Tourism plans to hold the first competition for passing the GTO standards (“Ready for work and defense”) among young people. The occupying power has published a list of tasks for the GTO standards. Among them: shuttle running, long jump and cross-country skiing.

Mariupol School №53 serves as a location for propagandists to film. It is here that the racists bring “great guests” to show that “life has improved.” As you can see in the photo, the food has deteriorated significantly. However, the occupiers tell their parents how much better it has been with the arrival of Russia.

Humanitarian aid from the occupiers

De facto, one in four out of 130,000 Mariupol residents receives such a package due to queues.

A new batch of textbooks from the United Russia – 10,000 copies – was delivered to the temporarily occupied Mariupol. Among the textbooks for all classes – recipes, Russian language, Russian reading or literature.

“Textbooks for all classes include Russian alphabet, Russian language, Russian reading or literature. Period. All science according to Russian standards is over for Mariupol children.

Denazification. The genocide of Ukrainians continues at an accelerated pace,” Andriushchenko said.