Kyiv, September 10, 2014 – Situation in the ATO zone remains complicated.  Militants continue infringing ceasefire agreements reached in Minsk. Terrorist mostly used mortar guns and small weapons during assaults, and in some cases armor was used. Frequency of barrel and missile artillery deployment decreased within recent days. Within last 24 hours there were no fallen among Ukrainian military servicemen, 7 servicemen were wounded. The biggest number of bombardments and assaults is recorded on the positions nearby Debaltsevo and Schastya towns. Defenders of Donetsk airport defeated an assault and still consolidate this strategic object”, – reported Colonel Lysenko, the National Security and Defense Council Information Center spokesman at his briefing at the Ukraine Crisis Media Center. 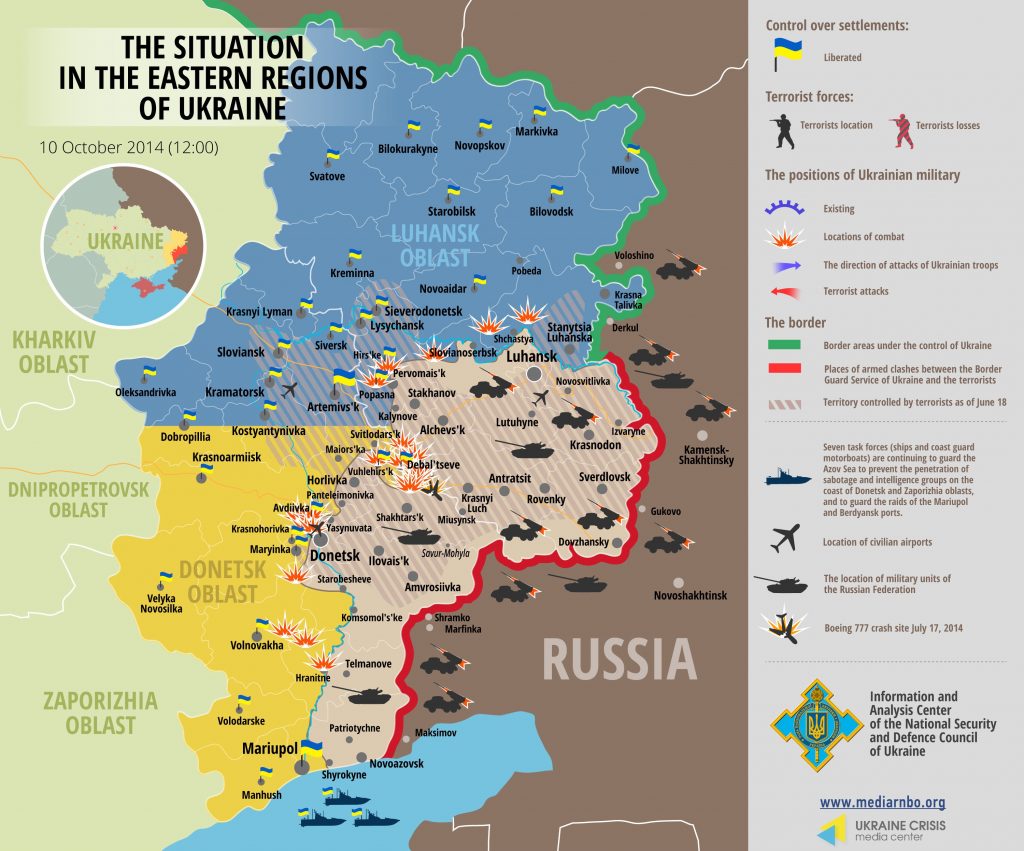 Servicemen of the National Guard defeated an attempt of Russian mercenaries to encircle a checkpoint nearby Vuhlehirsk of Yenakiyevo town council.

Mine clearance took place by efforts of border guards and Armed Forces in Luhansk region nearby Horodysche and Nyzhnya Baranivka populated localities where, as informed previously, a border detachment and non-combatants’ agricultural equipment had tripped mines in September and October. As a result three antipersonnel mines and three trip wires were neutralized along the road adjacent to the state border.

There were no military clashes recorded at the border beyond ATO area. Attempts of Russian Armed Forces to conduct air reconnaissance using pilotless aircrafts were recorded again nearby Mariupol and on the border with temporarily occupied Crimea. The situation in Mariupol is calm; the National Guard of Ukraine, Security Service of Ukraine and other special forces subdivisions are taking operative measures aimed at uncovering subversive intelligence groups.

The USA Ambassador to OSCE Daniel Baer  drew attention to insufficiency and weaknesses of Ukrainian-Russian border monitoring conducted by OSCE mission. He believes that OSCE is to extend its presence in the region and calls upon Russia to urgently start negotiations with Ukraine on issues of border monitoring and control implementation in compliance with Minsk agreements as well as immediate creation of buffer zone free from heavy armament.

Referring to the use of pilotless aircrafts from Germany in Donetsk, Federal Chancellor Angela Merkel stated that they might become an element of tightened monitoring in the conflict area. According to the Chancellor, Berlin is negotiating with OSCE on drones delivery.

Yesterday at 8:10 a border detachment of Luhansk detachment jointly with law enforcement officers detained 2 citizens of Ukraine in one of the checkpoints nearby Stanychno-Luhanske populated locality. Schemes of checkpoints location in Luhansk region and description of their working arrangements were found on these citizens. The detentioners were passed over to the counterintelligence for investigative activities.

In order to improve coordination between the Armed Forces, law enforcement agencies and volunteers, a decision on entering a structure of “Azov” regimen of the National Guard was made. It will offer a possibility to systematize and improve the preparation to deployment of volunteer battalions. At present new staff training and buildup of this regimen with specialists intended to train and establish control during combat activity are in progress. Training of single-discipline specialists continues, the regiment is being supplied with up-to-date mechanisms and equipment.

Terrorists delivered artillery shelling on Kuybyshevskyi district in Donetsk city from 6:30 pm to 3:30 am. 10 residential buildings were damaged as a result of a shell hit. Numerous damages of gas distribution pipelines as well as technological gas facilities were recorded, which resulted in multiple disconnection of consumers from the gas supply. Besides, a shell hit a multi-storey building No.18 in Ionova Street in Leninskyi district yesterday. 3 non-combatants died and 5 were wounded in Donetsk yesterday as a result of the bombardments.

Yesterday terrorists outshot a thermal power station in Schastya town using tanks and mortar guns. There are wounded. As a result of the thermal power station bombardment a fire emergency happened due to direct hit of a mine. Bombardments from the militants’ side continued through the fire-fighting operations.  The station is partially inoperative, rotating power cuts started. Residential quarters of Severodonetsk, Rubizhne, Lysychansk were partially cut of the electricity supply. Alchevsk, Perevalsk, Bilokurakyno populated localities also suffered from power cuts. Milovskyi, Bilovodskyi and Novopskovskyi districts were completely cut of the electricity supply. There also were problems with mobile communication. The terrorists’ bombardments are in fact directed against non-combatants. This situation might become especially dangerous as cold weather sets in.

Rendition of psychological assistance to non-combatants in the East of Ukraine continues. In particular, such aid was given to approximately 55 thousand people.

IDPs who officially register at coordination headquarters are provided with comprehensive state aid, including the lodging.  As of today about 15 thousands of places of residence were designated for IDSp from the ATO area.  We would like to remind a telephone number 101 for coordination of people leaving ATO zone. It can be dialed both from land lines and mobile phones.

Response of international community to the events in Ukraine

Brussels supports the position of Kyiv pertaining to absence of any ground to hold so-called elections which terrorists plan for the beginning of November in the areas temporarily controlled by them. It was the matter discussed during a meeting of the Minister of Foreign Affairs Pavlo Klimkin with the European Commissioner Stefan Fule. It was pointed out during the meeting that withdrawal of all the troops and heavy armament, efficient control in the border and progress in the hostages issue are key elements in bringing the situation in Donbas back to notmal. All these factors are to be efficiently monitored by OSCE representatives.

Summarizing the results of her three-day visit to Ukraine, USA Assistant Secretary of State for European and Eurasian Affairs Victoria Nuland stated that all effective international sanctions against Russia would remain in force until all the international troops and weapons are withdrawn from Ukraine and all the hostages released.  USA Ambassador to OSCE Daniel Baer  stated that Russia keeps disregarding Minsk agreements while it keeps Ukrainian citizens hostage, i.e. a serviceperson Nadiya Savchenko and a film director Oleh Sentsov. Daniel Baer also stated that it was high time for Russian authorities and the terrorists it supports to implement the agreements made in Minsk and allow OSCE monitors fulfil their work without further delay.