Kyiv, 29 October 2014 – Terrorists and Russian troops continue systematic violation of Minsk agreements terms and keep up shelling ATO forces units. “Ukrainian forces maintain active defense while repulsing all attacks and destroying the enemy’s firing points, when it brings no threat for civilians. Within the last day there were no casualties among Ukrainian servicemen, one soldier is wounded. Within 24 hours terrorists shelled Ukrainian positions on the territory of Donetsk airport with small weapons and grenade launchers. In the south near Mariupol Ukrainian positions were shelled with mortars near the villages Gnutove and Chernenko; near the settlement Pavlopil – with tanks and “Grad” systems. The situation in Mariupol is under control, municipal services function nominally”, – informed a spokesman for the Information and Analysis Center of the National Security and Defence Council  colonel Andriy Lysenko during his media briefing in Ukrainian Crisis Media Center. 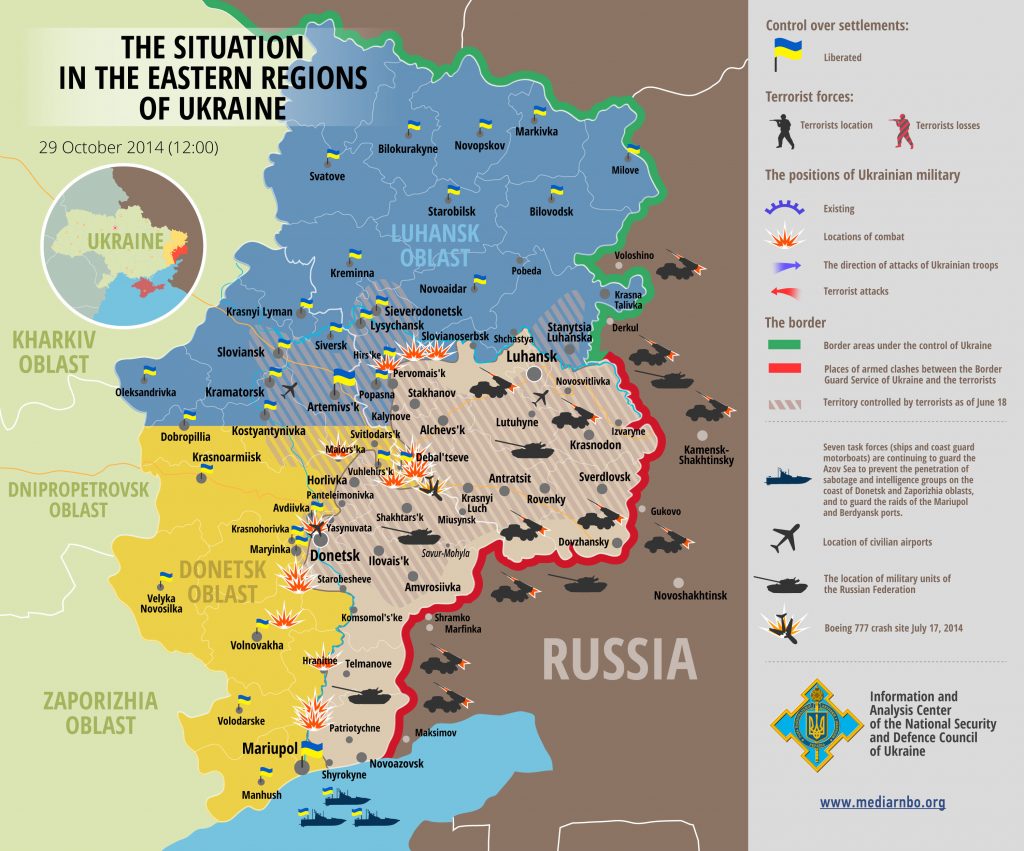 According to recent reports the activity of terrorists and Russian troops is observed to have increased before the so-called elections, which are planned for November, 2. The shift of Russian units from Rostov region to Donetsk and southern regions of Donetsk oblast’ is also noticed. Military personnel of Russian units received an order to give up all personal belongings, including documents, chevrons etc. Two military convoys of vehicles and personnel in Cossacks uniform are reported to arrive at the area. The intelligence reports a series of large provocations with numerous casualties to be planned for November, 2 on the territories under control of terrorists and first of all in Donetsk and nearby. “We have information that terrorists’ tanks are marked with Ukrainian Army and National Guard insignia. The bandit groups of DPR and LPR ordered three thousands Ukrainian National Guard uniforms, already drawn into circulation. Journalists of Russian mass media arrive at the uncontrolled territories to cover the illegal poll on November, 2 and 9. We want to warn the citizens that it will be life threatening to take part in the so-called elections, as there is a high probability of terrorist acts at the voting precincts”, – emphasized the spokesman of the National Security and Defence Council.
Yesterday afternoon in Donetsk terrorists were shelling at Kuybyshev and Kyiv districts. As a result of a shell hit a house at the address 56, Rayduzhna Str. was totally destroyed, 1 civil person died.