Kyiv, 28 November 2014 – The situation in the anti-terrorist operation (ATO) zone remains tense. Heavy equipment keeps being moved to the Ukraine territory, rotation of servicemen of the Russian Federation Armed Forces continues. “Yesterday at 6 am a convoy of military equipment including 11 tanks, 2 Tigr vehicles and 4 tented Kamaz trucks as well as 8 tracked towing vehicles used for transportation purposes crossed from the territory of the Russian Federation directed to Komsomolsk of Donetsk region,” informed Colonel Andriy Lysenko, spokesman of the Information Analytical Center of the National Security and Defense Council (NSDC) at the Ukraine Crisis Media Center. In the last three days considerable amount of military equipment was spotted on the move to Ukraine through “Izvaryne” border crossing point. The convoys included 3 tanks, 2 APCs, 2 BM-21 Grad, 121 Kamaz trucks and 14 trucks of other types, 3 mini-buses, 22 Ural trucks as well as other equipment. Part of the vehicles were transporting the troops. 47 Ural trucks, 51 Kamaz trucks, 1 APC, combat reconnaissance patrol vehicle and 2 Grad systems were moving in the opposite direction and came back to the Russian territory. “Ukrainian side is considering whether the above military equipment is the so-called “eighth humanitarian convoy,” announced by Russia,” added the NSDC spokesman. 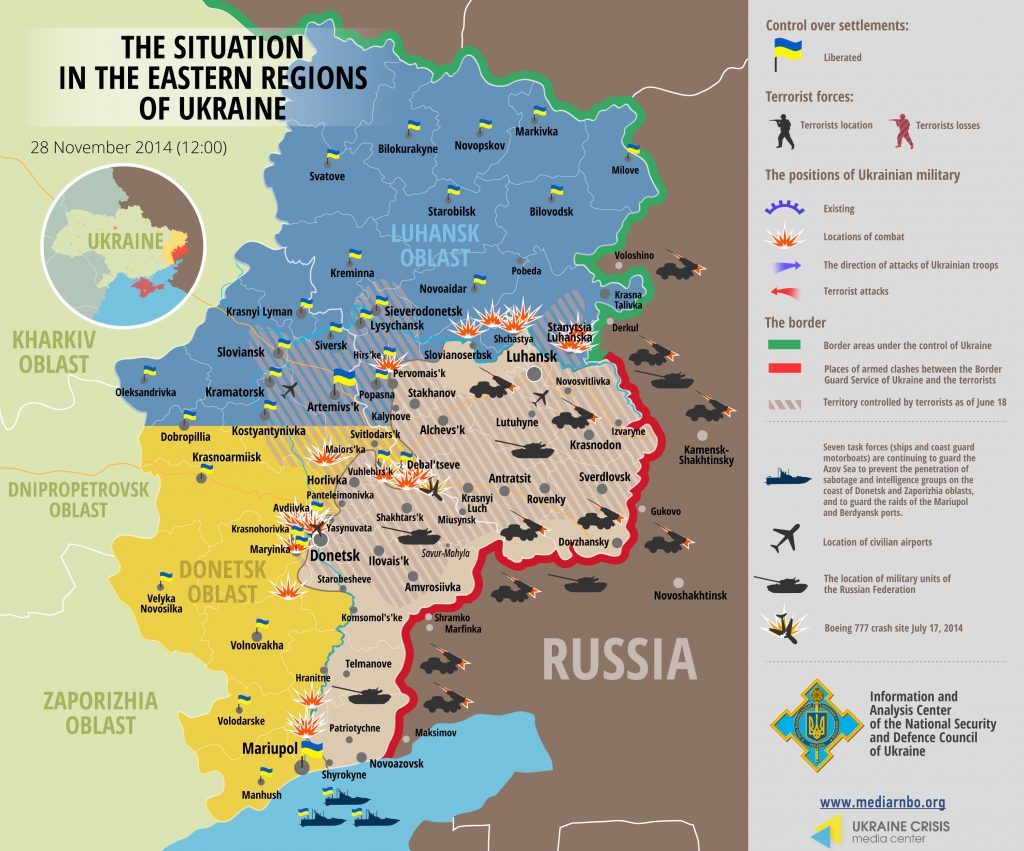 At the Luhansk direction terrorists fired with BM-21 Grad MRLS, artillery, mortars, grenade launchers and sniper weapons at ATO strongholds outside of population centers Vilkhove, Stanytsya Luhanska, Makarove, Heyivka, Artema and Shchastya. The stronghold near Prychepivka and Tryokhizbenka village were also was fired upon. At the Donetsk direction positions near the villages of Tonenke, Pisky, Berezove, Novomykhaylivka, Savne as well as near Shumy and Artemove were fired upon.

At the Debaltseve direction positions of ATO forces near Nikishyne and Orlovo-Ivanivka villages were fired upon with artillery and mortars. The checkpoint near Zolote population center came under mortar fire. In Vuhlehirsk area a group of militants’ tanks attempted to attack positions of ATO forces. Ukrainian servicemen repelled the attack having destroyed one tank of the terrorists.

Within the last day 1 Ukrainian serviceman was killed in action, 3 got wounded.

Today in the area of Shchastya population center Ukrainian military have shot down a Russian UAV with the first shot from a ZU-23-2 antiaircraft mount at the UAV’s attempt to fly above our positions.

Yesterday around 13.00 militants shelled Azotny district of Donetsk. According to preliminary data 2 civilians – a 12 year old child and a woman were killed as a shell directly hit the apartment. Terrorists fired from an automatic grenade launcher at Stanytsya Luhanska population center from the direction of Luhansk, as a result four civilians were injured.

Today the Boeing C-177 Globemaster III of the Royal Canadian Air Force will deliver over 3 thousand of winter uniforms sets worth of approximately USD 1,5 million for the Ukrainian Armed Forces servicemen to the Boryspil international airport.

Immediately after the arrival and unloading of the plane right at the airdrome the winter uniforms will be passed to the servicemen of a military unit of the Ukrainian Armed Forces.

Government of the European Union member states agreed to add to the list of sanctioned 13 individuals and 5 companies involved with the separatist movement in the East of Ukraine. The restrictive measures include freezing of assets and entry ban to the EU.

The Minister for Foreign Affairs of Poland Grzegorz Schetyna said there are no formal obstacles to prevent Poland from selling weapons to Ukraine. “Should there be such a request from the Ukrainian side, and it is applicable to all NATO member states, Ukrainians can do it, there are no bans.”