Kyiv, 3 December 2014 – “Situation in the anti-terrorist operation (ATO) zone remains complicated. Despite certain decrease in the number of times fire was opened and some progress in the plan to apply the silence regime in defined areas, terrorists keep violating the Minsk accords as to the ceasefire and shell positions of Ukrainian servicemen. Within the last day 2 Ukrainian servicemen were killed, 5 got wounded. Most complicated within the several recent days remains the situation at the Donetsk direction where terrorists got to another attempt to storm the airport. Despite the active attempts to seize the airport undertaken by terrorists and Russian troops this strategic object remains under control of the ATO forces. Ukrainian military successfully repelled all militants’ attacks, the enemy suffered big losses and was forced to withdraw its units to restore their combat capacity,” noted Colonel Andriy Lysenko spokesman of the Information Analytical Center of the National Security and Defense Council at a briefing in the Ukraine Crisis Media Center. 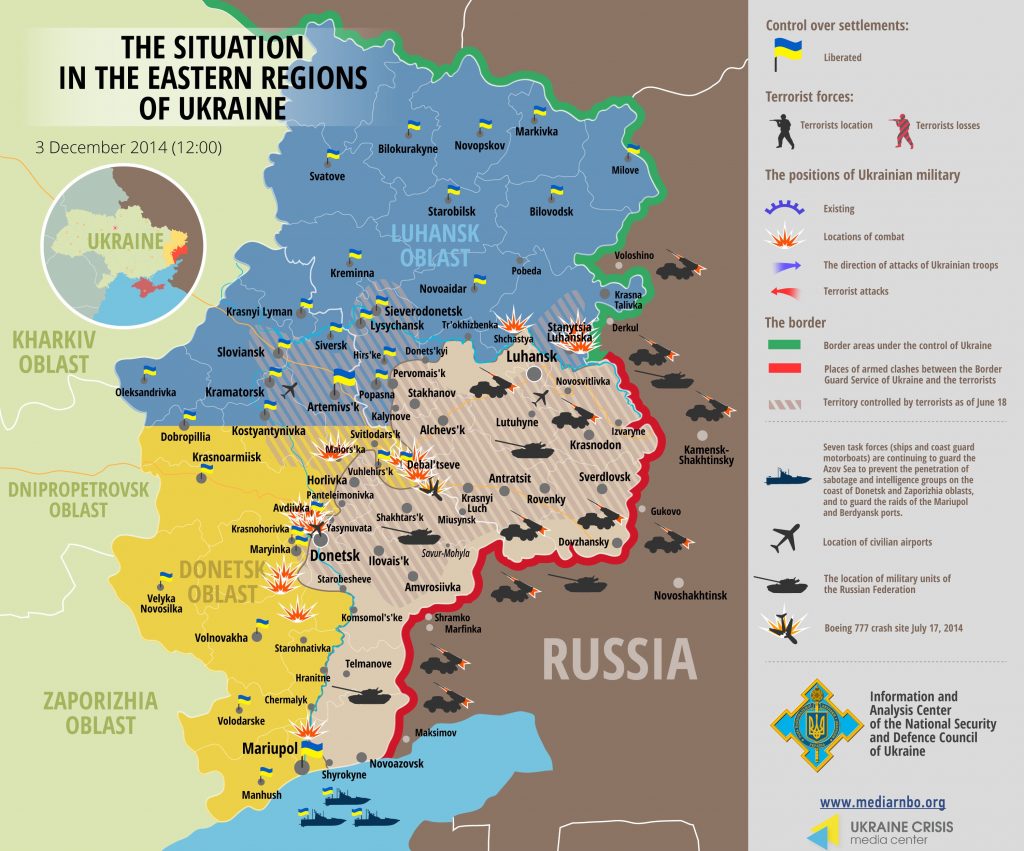 Within the last day terrorists shelled ATO positions seven times near Tonenke village with Grad multiple rocket launchers and mortars, shelled four times the strongholds near Pisky and Opytne villages. Militants fired several times at Ukrainian positions near Avdiivka and Slavne. Terrorists fired at a stronghold near Berezove village with artillery and tanks.

At the Luhansk direction near Stanytsya Luhanska terrorists fired three times at the positions of Ukrainian Armed Forces with mortars, grenade launchers and small arms. Yesterday at the same direction positions of our servicemen near Verkhnya Vilkhova village were shelled with Grad MRLS.

Yesterday violation of Ukraine’s air space was spotted in the Sumy region. “At 11.20 border guards spotted a Mi-8 helicopter with the insignia of the Russian Federation customs service that flew into the territory of Ukraine several hundred meters deep at the Tyotkino (Russian Federation) – Boyaro-Lezhachi (Ukraine) direction and returned back in the same direction,” explained Colonel Lysenko.

On Tuesday and last night militants of the so-called “Luhansk people’s republic” fired with various types of weapons at a row of population centers controlled by Ukraine in Luhansk region.

US Secretary of State John Kerry said Western sanctions had damaged the Russian economy. He underlined that Russia could avoid further sanctions by agreeing to steps towards ending backing for the separatists in Donbas. “Since the September 5th Minsk ceasefire agreement, Russia has funneled several hundred pieces of military equipment and material – including tanks, armored personnel carriers, and heavy artillery pieces – directly to pro-Russian separatists in Ukraine,” noted John Kerry.

German Foreign Minister Frank-Walter Steinmeier said that Russia keeps violating the international law, in particular due to the Crimea annexation and called to stop fights in the East of Ukraine. “We have to achieve a political solution for the long-term perspective,” stated Steinmeier.

On 2 December in Brussels a meeting of the Ukraine-NATO Commission took place at the level of the Ministers for Foreign Affairs. The Commission signed a joint statement in which the parties decisively condemn “Russia’s continued and deliberate destabilization of eastern Ukraine in breach of international law, including the provision of tanks, advanced air defence systems and other heavy weapons to the separatists, and military activities, which violate the agreements reached in Minsk in September”.