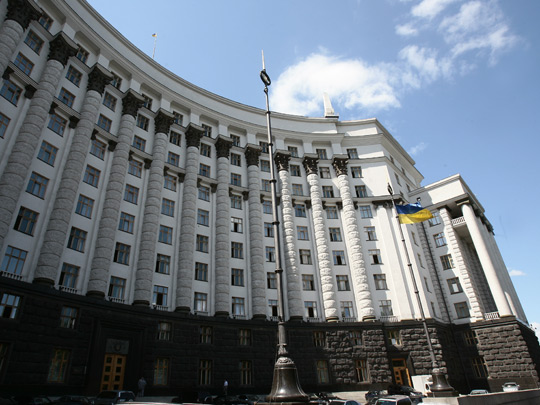 OF THE CABINET OF MINISTERS OF UKRAINE

1. New defense policy of safeguarding national security and defense capacity of Ukraine and restoration of the national sovereignty over the entire territory of the state:

Approval and implementation of the State Armed Forces Development Program till 2020;

up to 5% of the GDP – expenses for the defense and law enforcement (annually):

Withdrawal from non-aligned status facilitation of approving the new edition of the Law of Ukraine on the fundamentals of domestic and foreign policy (2015);

Implementation of NATO standards in the Armed Forces:

Implementation of the European Wall Project: construction and reinforcement of border fortifications between Ukraine and the Russian Federation (2015 – 2018):

Compliance with the eligibility criteria for visa-free regime with the EU, including the issue of biometrical passports compliant to the EU requirements (2015);

Social support of servicemen and other ATO participants:

Protection of national interests in the international courts, ensuring restitution of losses caused by the Russian Federation military aggression (continuously);

Development and implementation of the Ukrainian informational safety concept (2015);

Deregulation and decreasing the number of linkages between the state and the business:

Decentralization and regional development, cascading the operational and management functions to the local level to the maximum possible extent:

Combating corruption and purification of the government:

Reduction of state sector expenditures share in the gross domestic product structure by 10% (2015 – 2016):

Integration of tax and financial reporting, its harmonization with the International Financial Reporting Standards (2015 – 2016);

Clearance of salaries by decreasing the burden on the salary fund:

Drafting and facilitating the approval of amendments to the Law of Ukraine “On collection and accounting of the single state social insurance contribution” (staged decrease of the single contribution from 41 to 15 per cent) (first quarter of 2015);

Harsher punishment for paying “black” salaries (drafting amendments to the Code of Ukraine on Administrative Offences and the Criminal Code of Ukraine) (first semester of 2015);

Approval by the Ministry of Finance together with the National Bank of Ukraine of legislative acts aimed at decreasing the shadow turnover of cash (first quarter of 2015);

Decrease of tax burden over small and medium business, in particular:

Implementation of tax compromise institute to ensure declaring of available assets in full and implement mandatory declaration of revenues;

Implementation of the new VAT administration system (first quarter of 2015);

Fulfillment of IMF cooperation program (within the program time span);

Implementation of corporate management according to the OECD standards, appointment of recognized specialists to the key positions in the state companies:

Modifying the system of strategic state property management via creation of the holding companies relying on international governance standards  (2016 – 2017).

Support and development of small and medium agricultural businesses:

Engaging loan resources (up to USD 1 billion) from the international institutions (2015);

Engagement of investors in modernization and operations of the Ukrainian gas transportation system:

Reorganization of the National Joint-Stock Company “Naftogaz of Ukraine” in accordance with the EU Third Energy Package:

Integration of Ukrainian energy system in the ENTSO-E European energy network (since 2017);

Cancellation of cross-subsidies, adoption of market-based tariffs for natural gas and power, which would support energy companies profits growth, along with the implementation of reimbursement mechanisms for the low-income populations (2017);

drafting and facilitating the approval of the new edition of the Code of Mineral Resources, in particular, introduction of transparent and fair competition rules for minerals extraction through open bidding, taking mineral extraction out of the shadow economy sector (coal, turf, amber) (first semester of 2015);

Cancellation of joint activities and uptake of products distribution contacts in minerals mining:

facilitating the efficient consideration of the claim against Gazprom JSC in the Arbitration Institute of Stockholm Chamber of Commerce with respect to terms and conditions of natural gas transit and supply contracts (first semester of  2016);

Implementation of mixed taxation system for energy sector according to international standards (2015);

Development and implementation of the Ukrainian Cultural Policy Strategy (2015);

Drafting and facilitating the approval of the Law of Ukraine “On national cultural product” (2015);

Revitalizing of the national patriotic upbringing and awareness system (continuously).

Implementation of cooperation programs with IMF, World Bank, EBRD, EIB and other IFIs;

Establishment of the single center for donor and international assistance coordination;

Engagement of assistance for IDPs and Ukrainian citizens in Donbas and the Crimea, in particular, Crimean Tartars, from United Nations, G-7 and the EU.