Kyiv, February 21, 2015 – 2911 militants and Russian servicemen, over 40 tanks and 30 combat armoured vehicles. Since the beginning of armistice on February 15, 868 mercenaries, 8 tanks, 11 armored combat vehicles and 4 MRLS of the enemy have been destroyed, informed anti-terrorist operation spokesman, colonel Andriy Lysenko at his press briefing at Ukraine Crisis Media Center. 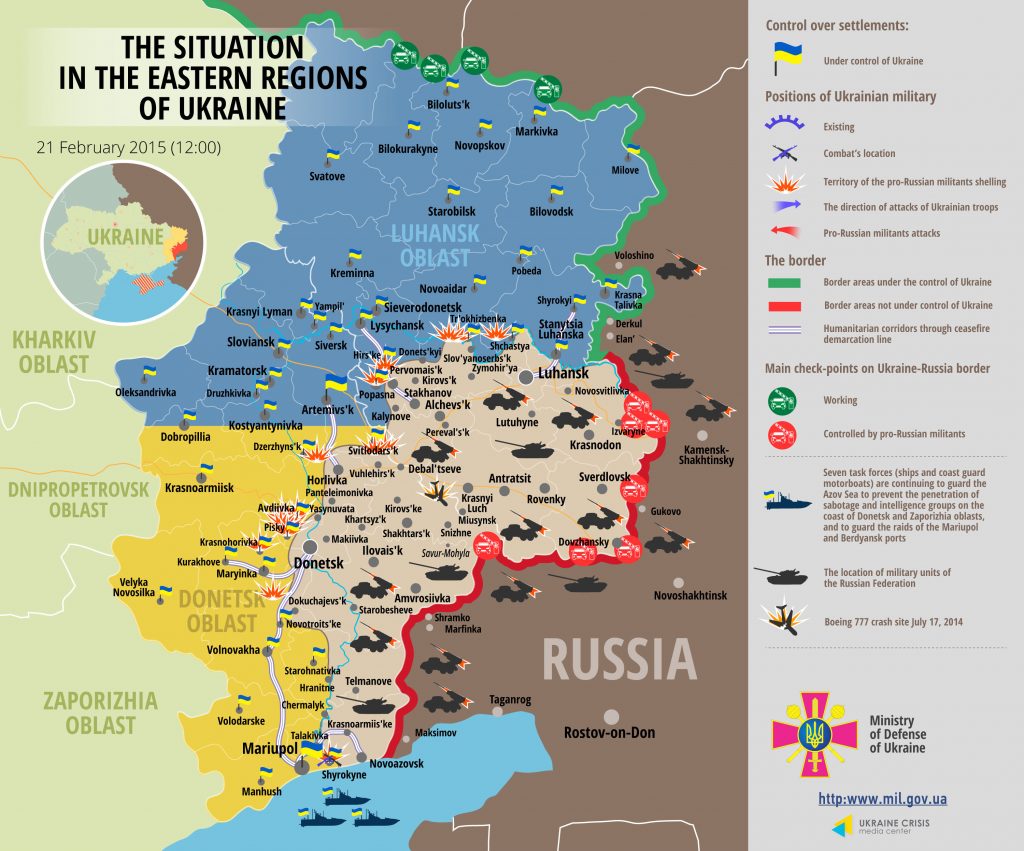 ATO spokesman informed that during the day militants continued shelling ATO forces along the entire demarcation line. Militants’ armed provocations are still intense in Yasynuvata in Donetsk region: nearby Pisky village, in Opytne village area, nearby Vodyane and Tonenke villages. Mine throwers, reactive artillery and tanks are actively deployed. Increasing the number of military equipment, armament and men force takes place in Mariupol direction with the aim of possible assault of Mariupol. Provocations nearby Shyrokyne take place – militants shelled ATO forces positions 10 times using mine throwers, grenade launchers and light weapons and also made an assault attempt. ATO forces are regrouping and enforcing new defence lines. Russian terrorist groups displayed activeness in Luhansk region, shelling Ukrainian troops’ strongpoint nearby Popasna and Popasna town itself using MRLS БМ-21 Grad. In the past 24 hours 16 enemy’s pilotless aircrafts were spotted in Mariupol, Donetsk and Luhansk directions. Most pilotless aircrafts appear in the sky within 30 minutes after the end of the shelling.

Federal Chancellor of Germany Angela Merkel after negotiations with French president Francois Holland in Paris said that “…all the peaceful agreements on Ukraine are to be fulfilled as soon as possible. Otherwise, Russia will face new sanctions. Sanctions are not a goal, but a possibility, so the EU can raise this issue, if needed”.

ATO spokesman also informed that an exhibition of evidence of Russian aggression on the territory of Ukraine “Presence” opened in Mykhaylivska Square in Kyiv. It exhibits samples of trophy weapons and military equipment of Russian origin captured by our soldiers from enemies in Donbas. Visitors can also see photo-, video- and documentary evidence of military aggression and international terrorism sponsoring by the Russian Federation. The exhibition will be open until February 28, admission is free.