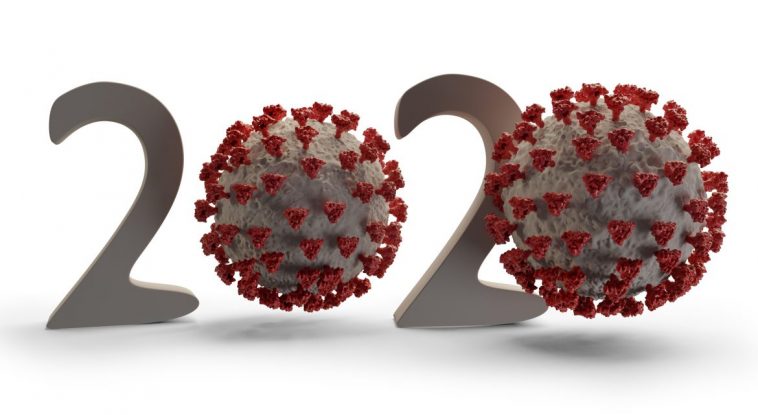 As the year 2020 draws to a close, we offer a look at some of the year’s milestones in Ukraine. Same as everywhere else in the world, in Ukraine the year was marred by the coronavirus pandemic, lockdown measures, restrictions on individual freedoms, closed borders, COVID-19 deaths, an economic downturn, and uncertain future. Still, the global pandemic did not cross everything else off the agenda. We’re wrapping up the year 2020.

Challenge of the year: coronavirus pandemic

Since the pandemic began, Ukraine has recorded more than one million cases – 1,030,374 infections as of December 28. There have been 665,729 recoveries and 17,849 deaths. In the past weeks, daily new cases have been declining, officials say. On December 27, Ukraine logged 4,385 new coronavirus cases, a significant decrease from a few weeks ago when new daily cases surpassed 15,000. With less testing being done, experts raise doubts that the coronavirus outbreak is slowing. The Kyiv School of Economics sustains that Ukraine has one of the world’s highest positivity rate (the percentage of all coronavirus tests performed that are actually positive) standing at 33 per cent, while the WHO criteria is a positivity rate of less than five per cent.

Vaccines. Ukraine is currently negotiating a deal with manufacturers of the potential vaccines and the vaccines that the EU has already approved. At the moment, neither the outcome of the negotiations, nor the number of doses to be supplied is certain. While the queue to get a COVID-19 vaccine is huge, many countries have preordered the vaccines from manufacturers long before they were licensed.

Besides, Ukraine is to get some vaccine doses as part of the COVAX initiative that ensures equitable access to COVID-19 vaccines. Initially, Ukraine could count on eight million doses being enough to vaccinate four million people. Ukraine’s Chief Sanitary Doctor Viktor Lyashko recently said that Ukraine will receive 16 million doses, being enough to immunize eight million people.

Ceasefire in Donbas, the longest over the years of war

The longest-ever ceasefire in Russia’s war against Ukraine is holding since July 27, 2020. On July 22, the Trilateral Contact Group on the settlement in Donbas negotiated a permanent and comprehensive ceasefire taking effect on July 27.

The year of land market reform

The year 2020 will be remembered as the year of the land market reform, or better “the year that changed land tenure”. Since the beginning of the 9th Parliament, the committee on agricultural affairs and land policy has demonstrated extraordinary efficiency.

They registered an entire block of land bills comprising both political and technical draft laws. Also, the Cabinet greenlighted several important initiatives through a number of decrees it passed. On the night of March 30 into March 31, the Parliament voted the land market bill into law with 259 votes. Despite the controversial model it sets, there’s a hope that the moratorium on the sale of arable land will be lifted, ending a 19-year era that saw Ukrainians unwilling to engage in land sale.

Another win is the Law “On the national spatial data infrastructure” that is fully in line with the EU INSPIRE directive. The law establishes a “single window” to access spatial information.

In future, it will bring together the information on infrastructure, IT networks and databases that will be made available to users as open data on the single geospatial web site or through the web sites of geospatial data holders.

Two plane crashes in one year

This year, Ukraine has seen two large plane crashes. In the beginning of the year, a Ukraine International Airlines jet crashed in Tehran. In September, an An-26 crashed during a training flight near Chuhuyiv, in Kharkiv region.

Chuhuyiv. On September 25, an An-26Sh military plane crashed during a training flight near Chuhuyiv, in Kharkiv region. The plane was carrying military pilots and cadets from the Ivan Kozhedub Kharkiv National University of Air Force.

The flight was intended as a night flight practice. Not the cadets, but the aircraft commander operated the plane.

There were 27 people aboard – seven officers and 20 cadets. Initially, two cadets survived, later one of them died in hospital. A technical malfunction caused the plane crash.

Tehran. The Ukraine International Airlines Boeing 737-800 crashed in Iran on the morning of January 8. All 176 persons aboard were killed, there were 167 passengers and nine crew members. All crew members and two passengers were Ukrainians. There were 24 minors, 19 of them ages under 12. The youngest child’s year of birth was 2018. On January 11, the President of Iran Hassan Rouhani recognized that the plane was mistakenly downed by the Islamic Revolutionary Guard Corps. “Human error” is what caused the tragedy, Iranian officials said.

The plane crash is one of the world’s top 50 accidents by the number of fatalities.

Thirty-three per cent of Ukrainians named local elections Ukraine’s most significant event of 2020, responding to an open question of a survey conducted by the Razumkov Center. A majority of those who named it (54 per cent) say the event is positive, as little as 11 per cent consider it negative.

Only 16.5 per cent of Ukrainians believe that the country is headed in the right direction, while 67 per cent say Ukraine is off on the wrong track. As of late last year, more Ukrainians believed that things in the country were heading in the right direction (44 per cent) than thought they are off on the wrong track (36 per cent).

A majority of respondents (71 per cent) say the conditions in the country have worsened in the past year, three per cent believe they have improved, and 20 per cent say they have not changed. As of late last year, 29 per cent said the situation deteriorated, 14 per cent saw improvements, and 47 per cent did not sense the change over 2019. For a majority of Ukrainians, President Volodymyr Zelenskyi has been the biggest disappointment of 2020, the survey finds.

Major foreign policy events that count for Ukraine are the presidential elections in neighboring Belarus and the protests that followed, the presidential elections in the U.S., and Bellingcat’s investigation into the poisoning of the Russian opposition politician Alevey Navalny. The devastating research uncovers Putin’s regime and compromises Russia’s security service.

Bellingcat’s investigation. A joint investigation between Bellingcat and The Insider, in cooperation with Der Spiegel and CNN, has discovered “voluminous telecom and travel data” that implicates Russia’s Federal Security Service (FSB) in the poisoning of the prominent Russian opposition politician Alexey Navalny.

The open source intelligence experts claim that Navalny’s poisoning was being prepared from early 2017. Solid evidence collected by Bellingcat compromise Putin’s regime both in the international arena and domestically. The scandal can hit Putin hard.

Wrapping up with the state of happiness

Roughly seven-in-ten (72 per cent) of Ukrainians say they’re happy. Ninety-one per cent believe in happiness, while five per cent don’t. One-in-five Ukrainians (18 per cent) are unhappy, a survey conducted by the Research & Branding Group in November 2020 finds.

Ukrainians could potentially enter the top ten of the happiest nations.