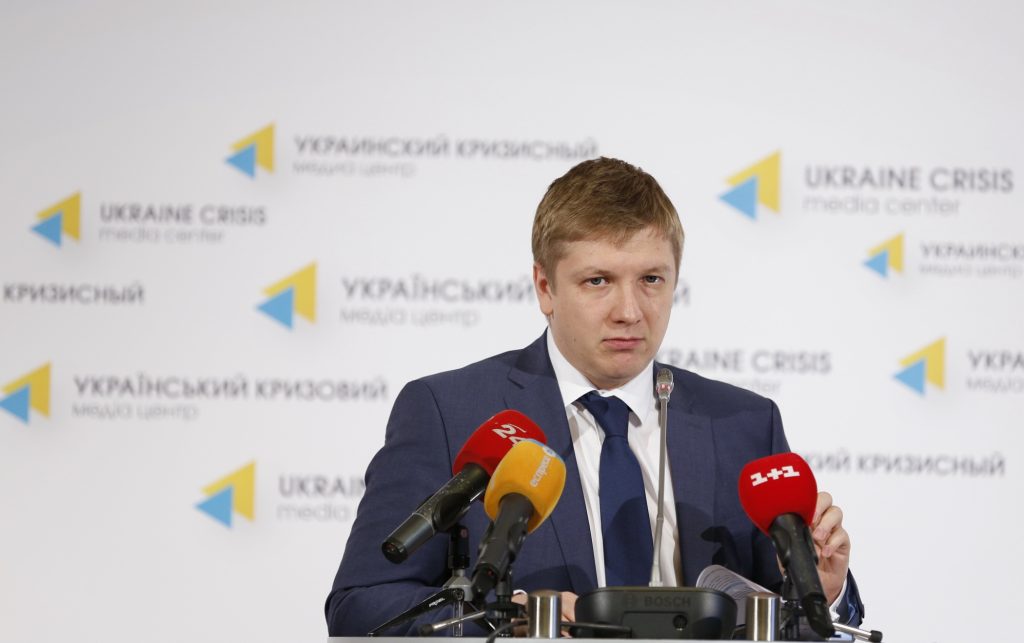 Kyiv, April 18, 2014 – Andrii Kobolyev, Chairman of Management Board of the NJSC “Naftogaz Ukraine”, at a media briefing in the Ukrainian Crisis Media Centre stressed that in order to ensure the transit of gas to the EU Ukrainian underground storage facilities should have 20 billion m3 of natural gas by October 15 this year. This can be guaranteed only by starting the reverse of gas from Slovakia prior to June. Currently, Ukraine is unable to finance the “gas cushion” for the EU at its own expense given the current tense relations with Russia and non-market gas prices set by “Gazprom” for Ukraine.

Kobolyev explained that to reverse gas to Ukraine Slovakia now needs to build 0.4 km of a suspended Slovak pipeline which may not be feasible until October; in that case the capacities will allow pumping of only 2.9 billion m3 of gas per year which is 10 times less than in the option proposed by the Ukrainian side.

“We have long analysed why they are holding such a position. After long negotiations we heard an informal answer that actually the stretch on the Ukraine-Slovak border is virtually controlled by “Hazpromeksport” that decides which direction to pump the gas – to Europe or to Ukraine. As were told, such state of things is due to the contract, which we have not seen – commented Kobolyev.

“It is clear that “Naftogaz” cannot buy gas at $ 500 to pump it into underground storages and maintain gas transit. We need to find a simple and fast solution so that we have access to natural gas at market prices. Already now in Europe we are offered gas at $ 350, – said Kobolyev. – We propose that we and our European partners find a legal way, since the technical way how to reverse Russian gas to Ukraine, or how to pump gas from Europe has already been found. Then we will be able to buy gas at market price and pump it into underground storage facilities.”

“We clearly understand that there is a feasibility to pump at least 30 billion m3 of gas from Slovakia. When we say “pump” we do not mean reverse, but that the gas pipeline going from Europe to the Slovak-Ukrainian border has the capacities to pump that amount of gas to Ukraine. That is to say there is available capacity which can be used for various types of gas – gas going to Slovakia from Ukraine as well as for gas that can be pumped from Europe via Slovakia to Ukraine”, – commented Kobolyev.

As for the so-called virtual reverse, the head of the NJSC “Naftogaz Ukraine” confirmed that Ukraine had proposed that the three functioning gas pipelines be inflated at their maximum and the gas be reversed to Ukraine. Then there would be no need to build new capacities. He noted that this solution was proposed by the Slovak side in 2011, and that today a similar practice is employed with regard to Poland.

Andrii Kobolyev – since March 2014 Chairman of the Management Board of the NJSC “Naftogaz Ukraine”, a former employee of the Corporate Finance and Price Policies Department, a former advisor to the Chairman of the Management Board of “Naftogaz Ukraine”, an adviser at AYA Securities investment company (2010-2014), management consultant in the Ukrainian branch of PricewaterhouseCoopers (1999-2002).