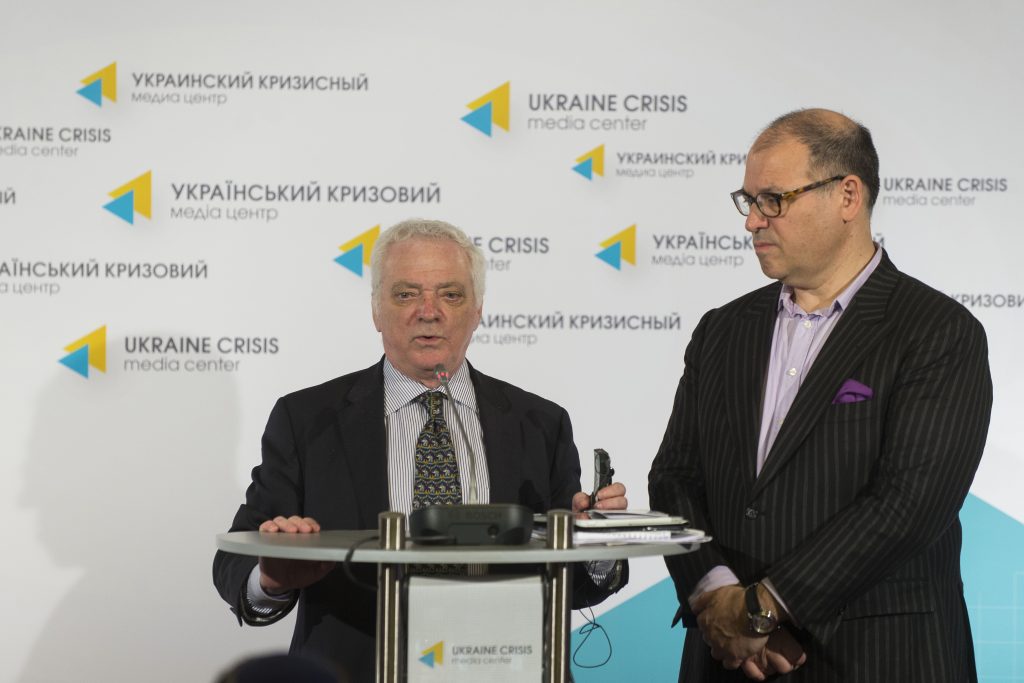 Kyiv, May 16, 2014 – «The broad experience is that such problems, which the Jewish community has in Ukraine, are coming from Russia. It’s the use of the community as a part of weapon of war. Anti-Semitism is much less a problem in Ukraine than in most of the societies I could think of”, – said Berel Rodal, Cairman of the Advisory Board of the International Public Initiative «Ukrainian-Jewish Encounter» (UJE) during a briefing at the Ukrainian Crisis Media Center.

“The rhetoric of the Russian propaganda often accuses Ukraine of alleged anti-Semitism and fascism, while under indisputable facts, it is the Russian fascist and neo-Nazi organizations, who are actively involved in the organization of pseudo-referendum and other events taking place in the East of Ukraine”. – noted Adrian Karatnycky, member of the board of directors, co-director of UJE and former head of the human rights organization Freedom House.

Shimon Briman, the editor of Israel and the CIS at the newspaper Forum Daily (New York) noted that most of the anti-Semitic statements occurred in conjunction with pro-Russian attitudes: “Swastika appeared on a synagogue in Simferopol due to a night invasion of Russian troops”.

“In comparative terms Ukraine rates very low under the level of anti-Semitism: in 2011-2012 there were 14 incidents and 8 crimes, and half a number the following year,” – said Berel Rodal.

In Shimon Briman’s opinion Israel is trying to maintain neutrality on the Ukrainian issue but mentioned the fact which took place a few days ago, when the Russian military ship was not allowed to enter the waters of Israel despite the previous agreement: “When it is time to choose, our government is obviously ready to make tough solutions”, – said Mr. Briman

Shimon Briman considers that two-thirds (2/3) of Israel’s population supports Ukraine: “The split of public opinion in Israel really takes place, but despite the broad expansion of Russian media the younger generation, which has access to more objective sources of information, is a pro-Ukrainian. Activists have even created a social network group «Israel supports Ukraine», which during a few months attracted over 2,000 followers taking an active part in activities in support of Ukraine”.