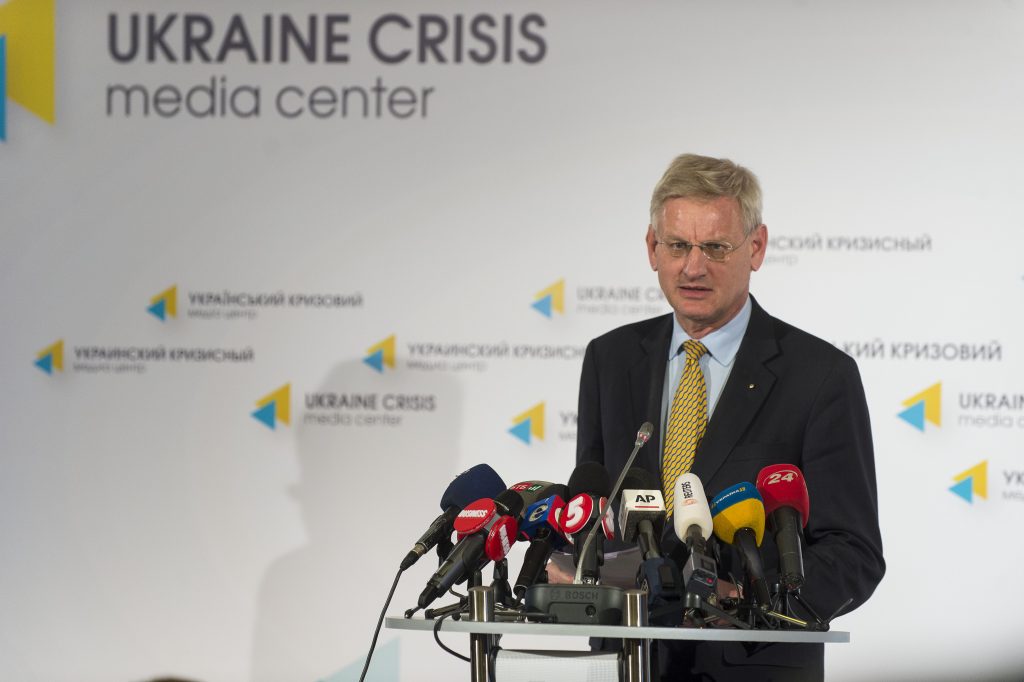 Kyiv, May 16, 2014 – Carl Bildt, Minister of Foreign Affairs of Sweden showed confidence during a briefing at the Ukrainian Crisis Media Center that free and fair elections in Ukraine will take place and assured that if anyone will try to destabilize and disrupt elections European Union will take measures

According to Mr. Bildt, the reforms the Ukrainian government is undertaking are necessary to ensure development of Ukraine. “I salute the government of Yatsenuk for the courage that he has demonstrated with the IMF programme and deep and comprehensive reforms, some of them painful, some of them not popular but absolutely necessary to turn this country around and demonstrate the full potential of Ukraine in the years ahead for the people of Ukraine and also for all of Europe,” – said the Minister.

Mr. Bildt stated he has full confidence in the way the government is handling the problems on the East of the country. “They’ve taken the actions against illegal armed groups very carefully.  And they’ve given the emphasis to the policies of the dialog,” – underlined he. But the Minister noted that the main dialog should be with democratically elected politicians from the East – negotiations can’t be made with separatists, that would be deligitimation of democratic institutions.

Commenting on the presidential elections Carl Bildt said that EU attaches supreme importance to the presidential elections: “You have a government which is a fully legitimate government. And it will be very good for the stability of the country to have fully legitimate political authorities as soon as possible”. Besides Mr Bildt added that he has no doubt that free and fair elections can be held across the vast territory of Ukraine. “I am also quite certain that some separatist forces will try to disrupt as much as they can in the East and citizens of Crimean will be deprived of their possibility to vote. But I think there will be free and fair elections on the overwhelming territory of Ukraine,” – said the Minister.

Mr Bildt assured that attempts by anyone to disrupt Ukrainian elections or to question the legitimacy of elections is not acceptable. “Everyone should be absolutely certain that if the policy of destabilization goes on we will take measures. But if we look at the sanctions against Russian economy that have been taken for now the far more important among them were those taken by president Putin himself causing a massive outflow of capital outside the country,” – added the Minister.

The most important thing to help Ukraine according to Carl Bildt is not to sanction Russia but to bring stability to Ukraine. He believes if Ukraine succeeds in its politics and economic reforms it will be a strong country to be able to withstand pressures and destabilizations. “Thus between European policies aimed at stabilization of Ukraine and Russian efforts to destabilize the situation decisive factor will be the efforts made my Ukrainian politicians,” – summarized the Minister.