Kyiv, July 7, 2015. Russia-backed militants decreased intensity of their activities in the last day. “Militants used heavy weapons the minimum number of times in the last two months. A total of six incidents of heavy weapons use in all sectors were registered over the last day,” said Colonel Andriy Lysenko, spokesman of Administration of the President of Ukraine on ATO related issues, at the press briefing at Ukraine Crisis Media Center. 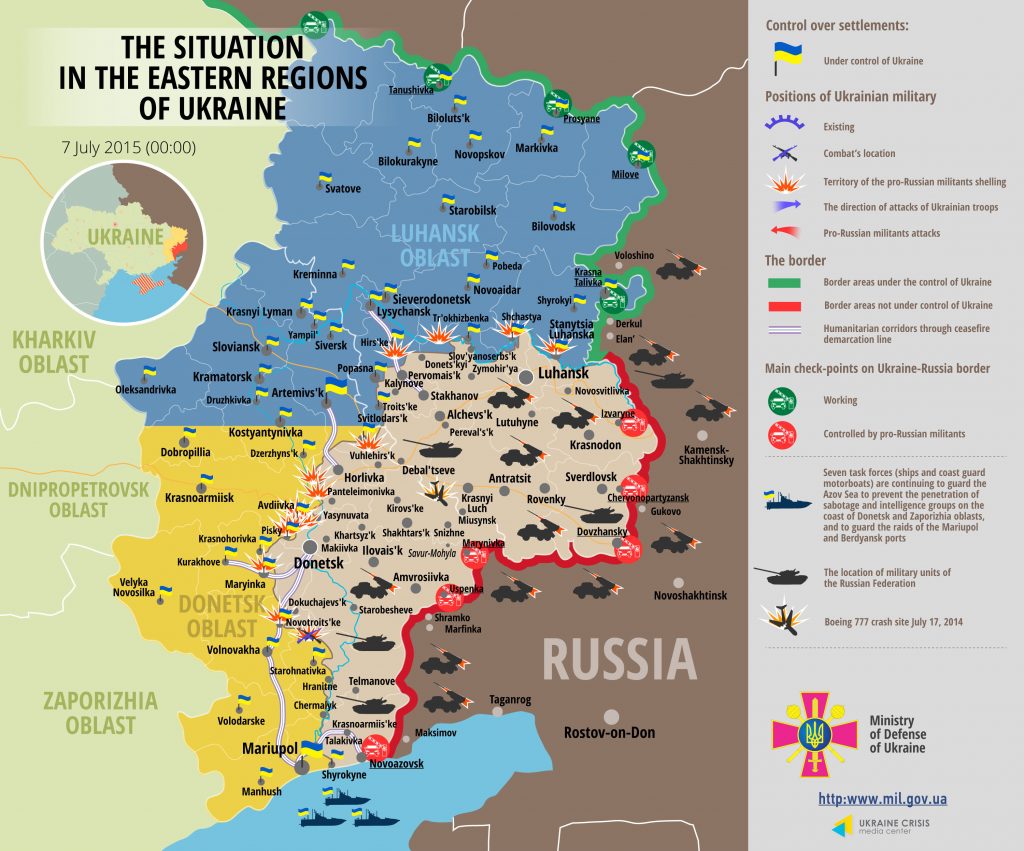 Militants held massive mortar shelling of Shchastya in the Luhansk sector last evening. Skirmishes took place near Krymske and Zolote. “With exception of Shchastya, no other incidents of heavy weapons in use were in the region,” noted Col. Lysenko.

In the Mariupol sector, a short-lasting mortar shelling of Ukrainian positions was registered in the area of Novotroyitske. In the evening there was a combat engagement between Ukrainian troops and militants in the area of Bohdanivka village between Volnovakha and Komsomolske. Ceasefire was generally holding on the Azov Sea coast.

Ukrainian Armed Forces did not incur any lethal casualties; three servicemen got wounded in action in the last 24 hours.

Ukrainian security services detained a militant informer in Donetsk region as well as three subversives who plotted terrorist attacks and attempted to engage in arms dealing in the Kharkiv region.

Ukrainian operatives uncovered an arms cache on the territory of a ruined factory, seizing over 10 kg of TNT blocks, F-1 and RGD-5 grenades with fuzes, MON-50 anti-infantry mine and electronic mine detonators.

Ukraine’s law enforcers confiscated RGD-5 and F-1 grenades, three kilograms of powder, TNT and a large number of ammunition rounds from two servicemen who were travelling in the bus along the Zhytomyr-Chernivtsi road. “Also thanks to attentiveness of Dnipropetrovsk residents, security service seized four TM-57 and TM-62 anti-tank mines in the area of port area,” said Col. Lysenko.