Kyiv, July 11, 2015. Ten Ukrainians held in militant captivity were exchanged on ten militants on the Shchastya–Luhansk road. Ukrainian servicemen of the 17th, 40th and 43rd brigades, 24th assault battalion as well as two volunteers returned home, said Colonel Andriy Lysenko, spokesperson of the Administration of the President of Ukraine on ATO related issues, at a press briefing at Ukraine Crisis Media Center. 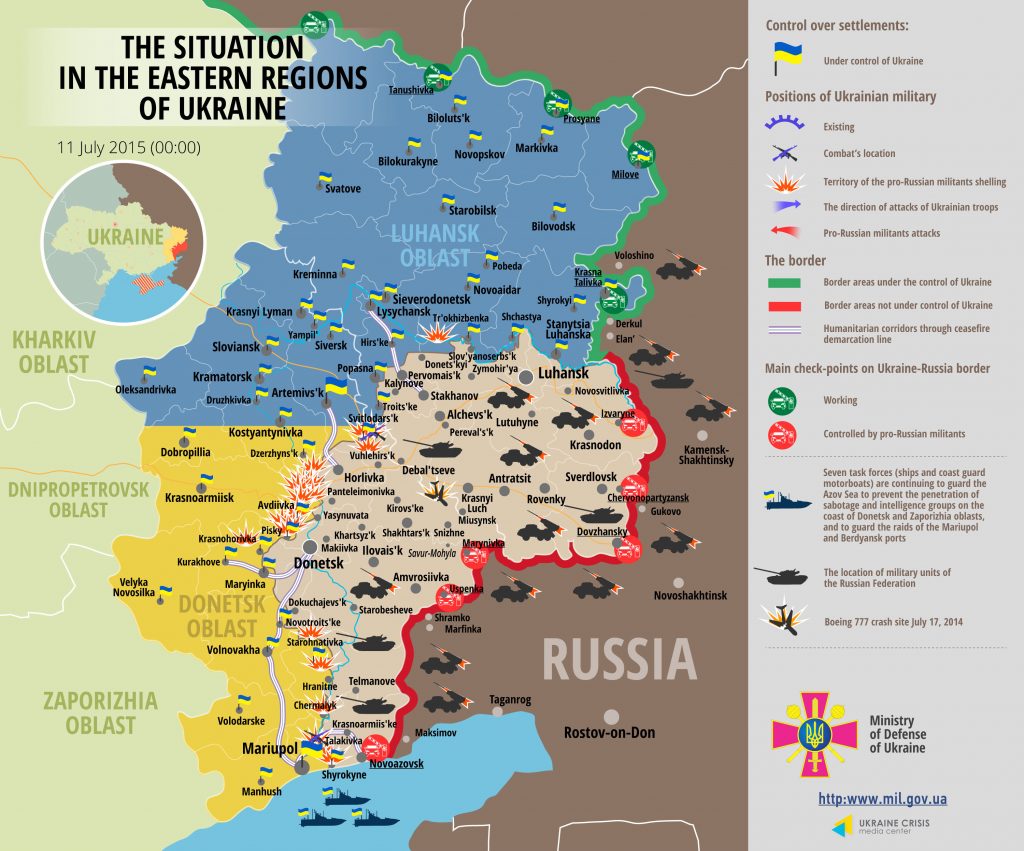 In the Luhansk sector, Krymske village was the only hotspot where three armed provocations occurred.

In the Donetsk sector, Russia-backed militants shelled residential districts of Svitlodarsk, damaging infrastructure. Fire exchange was recorded in frontline villages of Luhanske and Lozove. Incessant fighting continues in the airport area. By contrast, ceasefire was holding in the outskirts of Horlivka.

Militants continue instigating attacks on the strategically important part of the Kostiantynivka – Yasynovata railroad; most of it government-controlled. Such armed incidents recorded on the area stretching from Novhorodske (Fenolna station) to Verkhnyotoretske (Skotovata station).

Ukrainian Armed Forces did not incur any lethal casualties; five servicemen were wounded in action in the last 24 hours.

Ukraine’s Security Service detained a female militant informer who joined “DPR” in November 2014. The militant was detained once she arrived to the government-controlled territory in order to apply for a foreign visa.

Col. Lysenko also told about the deteriorating economic situation on militant-controlled territories where declining living standards and marauding have risen. The ATO spokesperson noted that militants dismantle industrial equipment at the Horlivka machine-building factory, as well as destroy parts of Chernukhino railroad for scarp metal.

Col. Lysenko also reported of increased number of cases of food poisoning among civilians on the militant-controlled territories, including children, due to the sale of low-quality or expired food. He noted that these foodstuffs usually come as part of Russia’s so-called “humanitarian aid”.