Kyiv, July 21, 2015. Observers of the Organization for Security and Cooperation in Europe (OSCE) Special Monitoring Mission along with journalists in Ukraine have been monitoring the supposed ‘withdrawal’ of tanks and artillery of less than 100 mm caliber. However, observers reported seeing only three tanks and four armored personnel carriers passing by Lozove and Novolaspa. Furthermore, their withdrawal cannot be confirmed. Colonel Andriy Lysenko, Spokesperson of the Administration of the President of Ukraine on ATO-related issues reported this information at a press briefing at Ukraine Crisis Media Center. “Besides, an OSCE UAV recorded artillery fire on Berezove committed by militants from Yasynuvata. The observers also warn about accumulation of combat equipment on the occupied territories,” added Col. Lysenko. 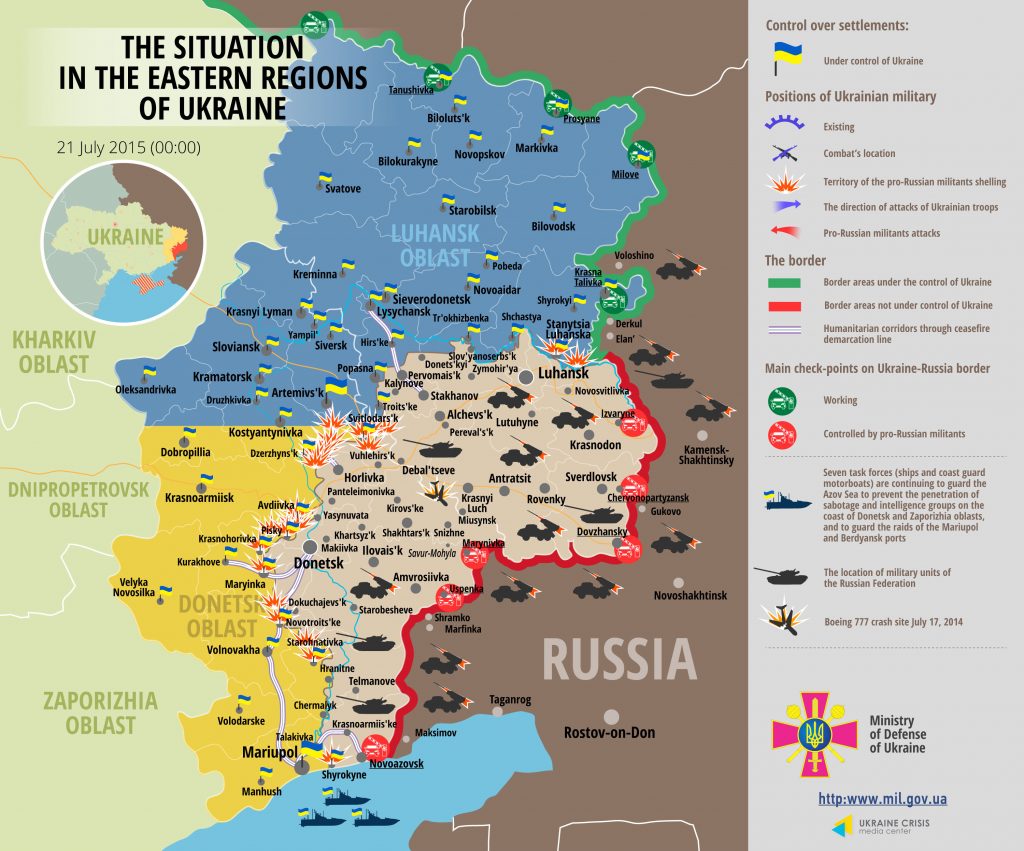 Militants used artillery to attack Stanytsya Luhanska in the Luhansk sector overnight. “A shop burned as a result of the shelling. Besides, gas and electricity supply of the regional center was cut off. A short-lasting mortar attack of Ukrainian positions nearby the state border took place at night. No aggressive actions of the enemy have been recorded in any other sector,” said Col. Lysenko.

Pro-Russian separatists fired intense mortar and artillery equipment for five hours near Svitlodar. “Militants aimed at a strategic bridge on М-03 road. The enemy artillery batteries were deployed directly at the frontline between Vuhlehirsk and Kalynivka. The enemy delivered mortar shelling near Novhorosdke.  There were no cases of ceasefire violations in the section from Horlivka to Yasynuvata,” said Col. Lysenko. ATO forces also recorded tank and artillery attacks on residential areas as well as on a coke fuel-producing plant in Avdiyivka.

“Statistics of the past days show that loud statements of chiefs of the “DPR” rebel groups on heavy armament withdrawal are a blatant lie. For instance, only in the past twenty-four hours, several civilians were wounded in Maryinka district. A particularly sinister crime took place on the outskirts of Donetsk, in the Kurakhovo sector. A vehicle proceeded from the occupied territory through the enemy checkpoint. The militants let the car through unimpeded, but then sent mortar fire after the vehicle. Three passengers in the car were injured,” said Col. Lysenko.

According to Col. Lysenko, the situation remains relatively calm in the Mariupol sector. Militants were engaged in artillery fire on ATO forces for a short time near Novotroyitske and Starohnativka using 120mm mortar launchers. Occasional armed provocations with grenade launchers and light weapons were recorded in Bohdanivka and Shyrokyne.

Ukrainian border guards spotted twelve flights of militant UAVs in the ATO zone yesterday. One Ukrainian soldier was killed in action and one more was wounded over the last 24 hours.

Sixteen trucks with humanitarian aid proceeded through the Buhas border-crossing checkpoint. They carried 255 tons of food, hygiene products and construction materials for Donetsk region residents. “The aid was procured by the International Committee of the Red Cross. Nevertheless, militants did not let the vehicles pass,” reported Col. Lysenko.

The Security Service of Ukraine seized an AK assault rifle, grenades and ammunition while searching a private residence. “The hiding places were made in a pullout sofa and home appliance boxes. The weapons were seized from a house of a man nicknamed Znak. He is on the wanted list on suspicion of participation in a pro-Russian military gang. We call upon citizens to stay alert and inform law enforcement agencies of any suspicious objects,” said Col. Lysenko.