Kyiv, July 25, 2015. On July 19, a Ukrainian serviceman, Vadym, was severely wounded in the heart as a result of the attack by Russia-backed militants near Maryinka close to Donetsk. Vadym was urgently evacuated to Dnipropetrovsk where the doctors stitched the wound and stopped heavy bleeding. “They made the impossible. Only two days after the surgery Vadym regained consciousness. Later he was transferred to Kyiv for another surgery at the Mykola Amosov National Institute for Cardiovascular Surgery. The doctors extracted two fragments from his heart, predicting that he would recover in the next two weeks,” noted Colonel Andriy Lysenko, spokesperson of the Administration of the President of Ukraine on ATO-related issues, at a press briefing at Ukraine Crisis Media Center. 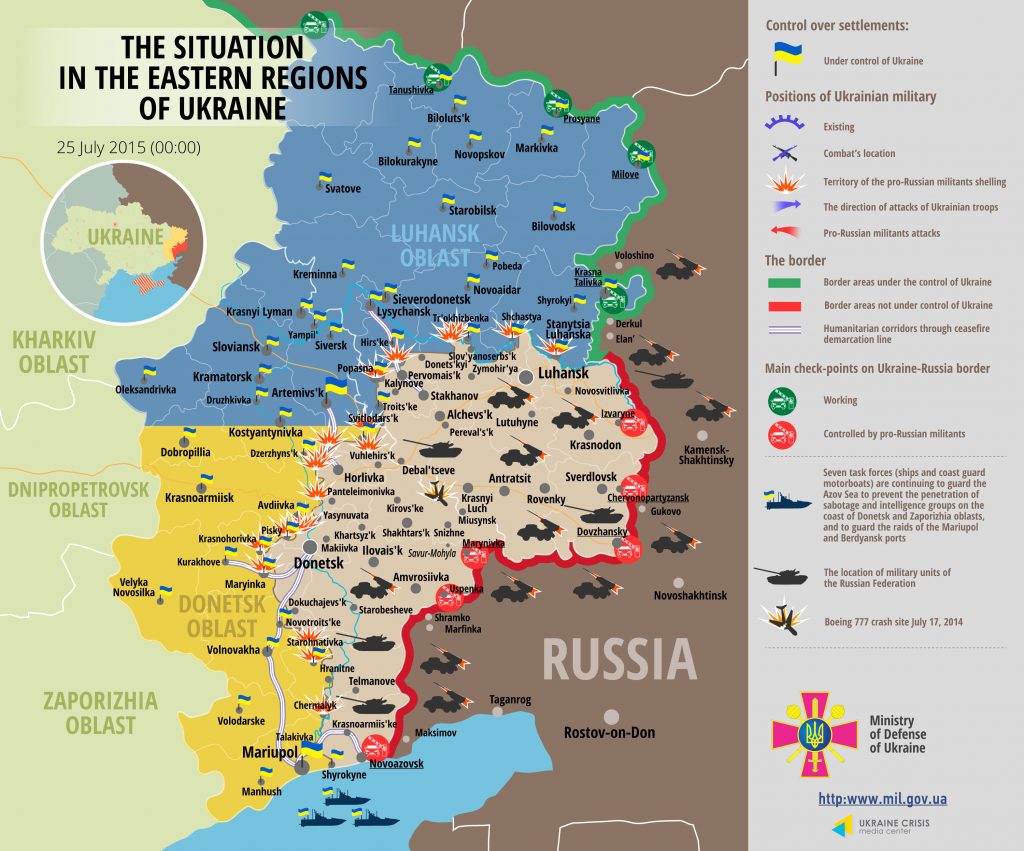 According to Col. Lysenko, a relative calm period in the Luhansk sector continued. However, militants occasionally fired from grenade launchers near Stanytsia Luhanska, Shchastya, Sokilnyky, Popasna and Zolote.

Donetsk sector remains the epicenter of the conflict with most of ceasefire violations occurring there. Most attacks were registered in the area of Donetsk airport and close to Maryinka. “The militants used 122 mm artillery, mortars, grenade launchers, tanks, and small arms,” said Col. Lysenko.

High level of tension remains on the western outskirts of Horlivka. “In the daytime the militants fired large-caliber incendiary shells at the village of Novhorodske to the south of Dzerzhynsk. As a result, several houses were burnt,” said Col. Lysenko.

Col. Lysenko noted that fighting in the Mariupol sector resumed. The militants resorted to attacks with heavy artillery.

One Ukrainian soldier was wounded in action in the last 24 hours.

Col. Lysenko also spoke about a tragic incident in the morning of July 24 the village of Pervomayske, Donetsk region. A driver of a military vehicle lost control over his car, causing a traffic accident. Three Ukrainian soldiers died in the incident and four were injured as a result.

According to Col. Lysenko, a total of five flights of militant UAVs were registered within the Donetsk and Luhansk regions.