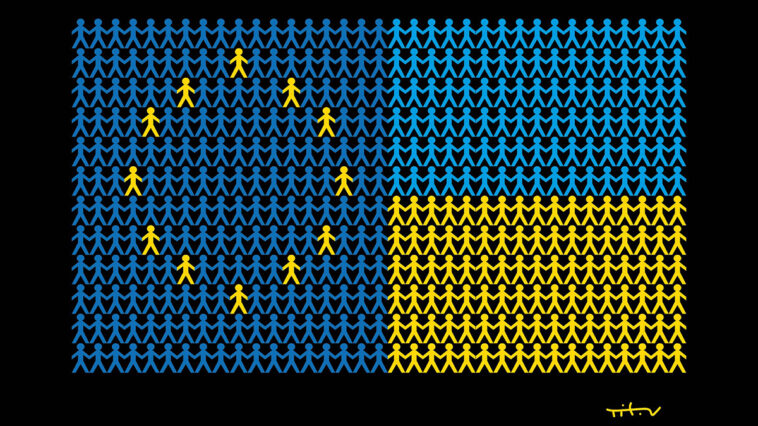 It’s been 90 days since russia’s invasion in Ukraine. An invasion which was meant to be over in 3 days. This war has actually been going on for 8 years and started 300 years ago.

Ukraine has changed quite a bit during these three months. We learned to live with constant air-raid alerts. The alarms had become something of an indication of the military strength because there are no air-raid alerts on the frontlines. For people there are under constant artillery shelling.

The whole notion of security had to be completely redefined. As well as the notion of property and household. Many of us lost everything we have built or saved during our lives, lots of us became refugees.

We started treating assets like houses, things and cars differently. Almost all of my friends who left their homes, gave the keys to their neighbours so those can take food, clothes, use the basement if needed, etc.

The cars were left with keys in the ignition and written notes encouraging people to use the car for evacuation or for volunteer work. These notes ended with “if you would not be able to return the car to us, we can live with that”.

Sadly we will never be able to redefine and comprehend the loss of our loved ones. Nor will we be able to understand or forgive the atrocities which russian soldiers committed and continue committing on Ukrainian soil.

The war isn’t over, the fighting doesn’t subside (on the contrary) whereas the fatigue is building up, the emotions dulling and problems transform from tactical into strategical. Not only in Ukraine but everywhere in the world.

So what could one do to avoid the “war fatigue” (which became the topic of the latest discussions in the media) and why it is crucial not to catch it.

Peacefulness does not work and will not work.

Today the voices, of those wanting to let putin “save face” and offering Ukraine to capitulate as well as to give russia the occupied Ukrainian territories, are getting awfully loud.

It is of course nonsense and a suicide for any sensible person but let us look at the politicians’ logic behind the narrative these persons transcend. Many politicians in Germany and France still live in an empire-like world with “areas of influence” and don’t want to change their point of view. To them Ukriane was for many decades merely a fiefdom of russia and whatever russians did here was perceived through the prism of Russian propaganda and information.

After Maidan revolution the situation improved but it became clear that there are, however, many agents of russian influence in these countries.

The fear of Third world war is also adding oil to the fire (bad news: it had already started). If only we could isolate this mess and put a lid on it, forget it and go back to trading with russia and voices of the electorate, to whom the cost of petrol is deeply concerning.

They may even get a Noble Peace prize while they are at it and make speeches on all the forums for many years to come about how “deeply concerned” they are about torture and concentration camps in Ukraine. The camps already exist in reality (in Donetsk) and this rhetoric will only help build more.

And a good/bad news (2 in 1) is that Ukraine will not capitulate and will not give away its territories. We already went through something similar in 2014 and we now know that it would be a crime against Ukrainians who have to endure unimaginable crimes, rape and torture in occupation. Another reason is that this will only grow russians’ appetite. They just regain their strength (including via trade with Europe) and attack again, “biting off” more and more territories.

I can understand the logic of a 98 year old Kissinger who plans living a couple more years in piece while “saving putin’s face”. But for people who see a more of a long-term perspective of theirs and their children’s lives, constant war with russia is not an option. It is much better to “finishing it off” now that rusisan army becomes weaker by the day.

Unfortunately this war is not only about Ukraine but the whole world. It is naïve to think that putin will stop at Ukrainian borders. Remember the consequences of pacifying Hitler in 1938 when he was given Sudetsky region without Czechoslovakia being present at the signing of the pact. When this region was part of Czechoslovakia until September 30, 1938.

Then Chamberlain was exulted with “bringing peace”. And what had happened a year after this “pact”? Was the “face saved” or world war avoided?

No, my friends, this kind of faces should not be “saved”! This “face saving” theory means loss of millions of good and honest people, torture and victory of the evil. Evil needs to be killed now. And while Ukrainians are ready to singlehandedly fight for the whole free world, they need to be helped! But this will be in my next paragraph.

What can be done? Help Ukraine win!

Even if I wasn’t a Ukrainian (unimaginable) I would still be sure that Ukraine needs to win and it has to be helped as much as possible. European and world elites, politicians, journalists and all the partners who drag their feet on giving Ukraine the weapons it needs, don’t deserve to be holding such high posts for they don’t have the needed strategical outlook.

Each intelligent being understands that while Ukraine is fighting (and succeeding) there is a real chance of getting rid of a crazy maniac who terrorizes the whole world and especially Europe. It is as if you had a neighbour with a grenade who would constantly threaten you and all you would do is get in the way of the police of arresting him because you have roses in your front yard and you are worried that the policemen may ruin them when they arrive.

Therefore people of the free world should first and foremost help their governments take decisions on arming Ukraine.  Ukraine is defending the global democracy from Russian totalitarian world and it’s democracy which gives us the ability to make our voices heard by the politicians. Don’t let them drag us and you into years or decades of a horrible war.

The more arms Ukraine gets the faster it will liberate its territories and resolve many pressing issues like grain supply, prices and global economy.

I know many help the refugees and we are forever grateful for it. But the weapons are not less important to our women and children who want to go back home to Ukraine and not become widowed and orphaned in a foreign land (no matter how peaceful and welcoming).

Secondly we should remember that today we are all volunteers. Many free and wonderful people in the world are enormously helping Ukraine. It’s the fundraising, direct volunteering, hosting the refugees, helping them. It is incredibly valuable and requires enough resource (both mental and financial).

Today we may finally see volunteer work (both in Ukraine and globally) go from spontaneous to systematic. For those who are just beginning their volunteer journey I can share my life hack on how to make volunteering systematic and build it in long-term perspective. It is volunteering withing your own profession using your professional skills and connections.

Yes, work in humanitarian aid and medical supplies is important for Ukraine but if you know nothing about it but you are a great art curator, you could help block russian art on big cultural stages and help Ukrainian art enter new markets. This kind of help is also very valuable for Ukrainians and our economy.

If you are an architect you can make module homes for refugees. Or if you are a designer you can collaborate with Urkainian brands and designers to help Ukraine in the world of fashion. All the above are great!

A lawyer is already working for the future tribunal. Like!

All Ukrainian refugees in other countries are our diplomatic core. Talk about it, tell your stories, go to manifestations. Any systemic help today is extremely important! This helps brings us one step closer to victory! Only you can know the best opportunities for such help within your professional skillset and do it in a stable and effective manner.

I am confident that each one of us went through our first horrible shock. Someone on February 24th, others after Bucha or cemetery in Irpin. Or perhaps after the Kramatorsk train station attack when adults and children waited to be evacuated or during the assault of Azovsteel or yesterday when 8 persons died in Kharkiv along with a 5 month old baby. His body was ripped from his father’s arms and thrown onto the roof of their home’s entrance.

Since my first tears and screams of these months I saw and read a lot. Russians in Ukraine shoot at everything and everyone. They use “Iskanders”, phosphorus bombs, “Tornados”, “Storms”, Tochka U rockets and some scary chemical weapons. All these terrifying words which I did not know but know now.

I read this every morning and evening and sometimes during the day. Of course, it makes one less sensitive but oh how I would love to push it away and forget it. BUT the trick is that we should not forget. If we want to win and remain normal people (or at least human) we have to remember and react. Not via hysterical outbursts and stress but by being toned and clear headed.

We lived through things that we could only read about in books. It is us who are responsible for overcoming this horrible experience. We should transform it into fortifying our stamina. We should be ready for a long war and anticipate victory in this war. We should be ready to systematically help Ukraine and constantly support our emotional and psychological health.

Russians already lost this war but we have to fight a bit more to win. And we will win! We just have to be together – each at their own front! And then we will have real peace after the war not a stupid temporary “truce”.