Kyiv, August 3, 2015. A large number of incidents were registered in the ATO zone, including militant attacks on the positions of Ukrainian troops with the use of heavy weapons. “Seven incidents were registered in the Donetsk and Mariupol sectors when militants shelled residential blocks of Ukrainian towns and villages with artillery and mortars,” said Colonel Andriy Lysenko, spokesman of the Administration of the President of Ukraine on ATO-related issues, at a press briefing at Ukraine Crisis Media Center. 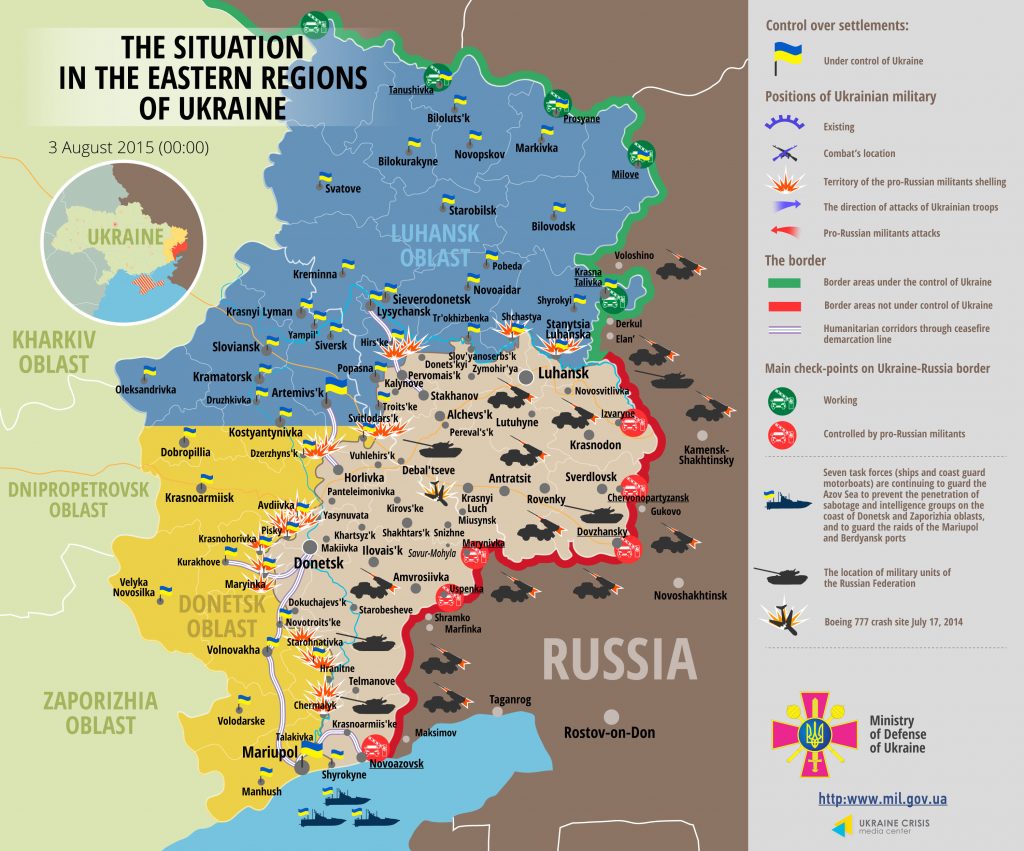 According to Col. Lysenko, areas around Stanytsia Luhanska are the most tense in the Luhansk sector. Militants instigated a series of provocations without the use of heavy weapons. At the same time, militants fired upon Valuyske, a satellite town of Stanytsia Luhanska, between 10pm and midnight, attacking with 152-mm cannons located in Luhansk proper. Sporadic provocations using small arms and mortars were registered near Shchastia and Orikhove. “Instead, the enemy mortared our blockposts near Zolote all day long. Fire was conducted from the direction of occupied Pervomaysk,”added Col. Lysenko.

Svitlodarsk remains the most complicated situation in the Donetsk sector. Yesterday morning Ukrainian positions were mortared for over three hours. Monitors of the Joint Control and Coordination Center also came under militant fire, with mines exploding 100 meters away from the center’s command point. “Militants concentrated a large number of heavy military equipment in the triangle of the area between Lohvynove – Kalynivka – Komuna and are openly firing upon our positions also during the day. At the same time, positions on the line Sanzharivka – Rozsadky – Luhanske are successfully held by Ukrainian forces,” said Col. Lysenko.

In the area of Horlivka, several armed provocations were registered on the combat line on the north-western outskirts of the militant-held town. Yesterday, the ceasefire held between Leninske and Verkhnyotoretske and between the southern areas of Donetsk and Novotroyitske-Dokuchayevsk. On the Western outskirts of Donetsk, combat activity involving the sporadic use of tanks and artillery continued nonstop. The residential blocks of Avdiivka and Vodyane came under fire from Russia-backed militants. “In addition, militant activity near Maryinka has slightly decreased,” added Col. Lysenko.

In the Mariupol sector, military activity was conducted on the Ukrainian defensive frontlines between Volnovakha and Telmanove. Militants deployed large-caliber cannons and mortars West of Donetsk, and are actively using them on Novoazovsk road between Starobesheve and Temanove. In the evening, militants conducted a number of mortar attacks on Ukrainian positions near three villages in Volnovakha district. Ukrainian troops also registered three massive artillery attacks by militants on Hranitne village. Yesterday, in the South, and further to the Sea of Azov, the ceasefire was upheld.

Four Ukrainian servicemen were killed in action in the last day and 15 were wounded in action.

In Novotroyitske, near Horlivka, a border guard unit detained an armed man wearing a military uniform without insignia. Over the course of the search it was determined that the detained resident of Horlivka is a member of a militant group. Another militant was detained in Mayorsk. “The man was driving from Horlivka on a motorbike bearing no number plate. The ID of the senior officer of the militant group, Vsevelikoye Voysko Donskoye [Almighty Don Host], was discovered over the course of the search,” explained Col. Lysenko.