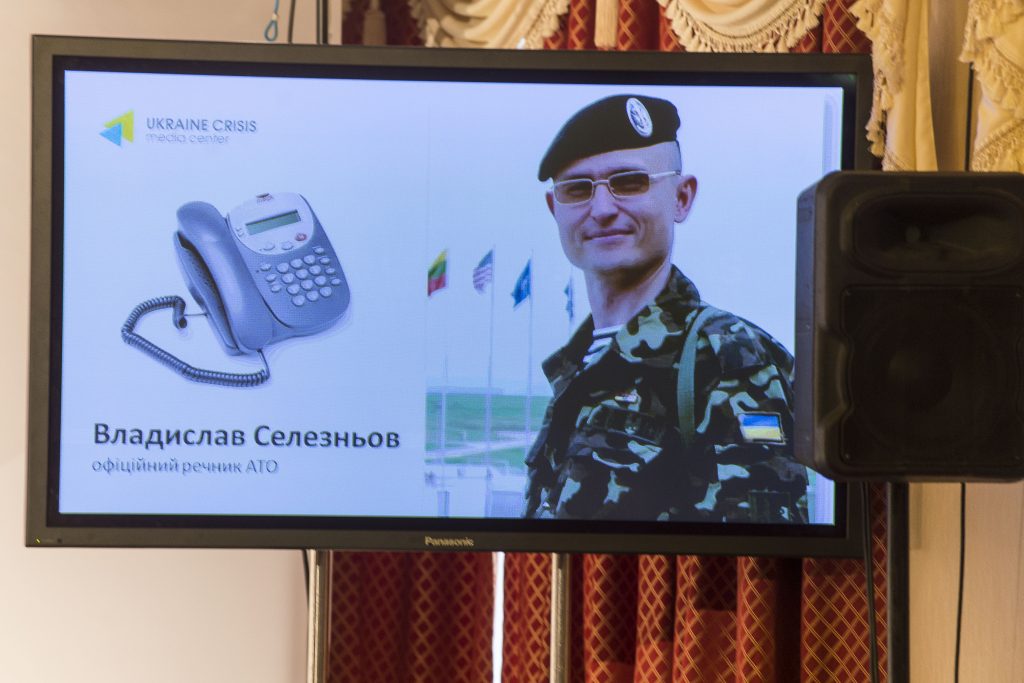 Kyiv, May 27, 2014 – all the anti-terrorist operation actions are aimed at ensurance of law, order, peace and quiet in Eastern regions of Ukraine. «Armed people not belonging to Ukrainian regular force structures are criminals and terrorists. They are either to turn in weapons or they will be destroyed. At the same time, information on civilians being allegedly attacked by fire by Ukrainian Special Forces in response to the rebels’ attacks is provocation. Placing residential quarters under fire, terrorists are trying to discredit Ukrainian Special Forces. They also set mental hospital on fire and conducted other subversive actions in Donetsk», – said official spokesman of the anti-terrorist operation Vladyslav Selezniov during his briefing call in Ukraine Crisis Media Center.

«On May 26 at 4.30 am the rebels seized S. Prokofiev international airport in Donetsk, endangering the civilian population of the city. The situation was calling for immediate action», – said Mr. Selezniov. According to the special forces’ information, 200 terrorists consisting majorly of citizens of foreign countries, settled in new terminal of the airport. The anti-terrorist operation commanders delivered the terrorists an ultimatum, guaranteeing safety to those who would turn in weapons voluntarily. As the terrorists did not fulfill the special forces’ demands in the required time, actions on the terrorists overpowering were launched, involving aviation application. All the terrorists who were inside the terminal were dispersed and destroyed.

«At present we own intelligence information pertaining to all the objects of terrorists’ location. Should the terrorists not surrender voluntarily, the anti-terrorist operation commanders give the warning on high-accuracy special weapons deployment for terrorists’ operating site destruction, – said Mr. Selezniov. – The information on the number of terrorists destroyed is being verified at the moment, there are no losses among civilians or Ukrainian special forces, one military man suffered light injury».

Mr. Selezniov informed that there are public prosecution service representatives working as a part of the anti-terrorist operation headquarters. They monitor the compliance of the actions and measures within the scope of the anti-terrorist operation with Ukrainian legislation, international acts of UNO requirements. Working group consisting of qualified investigators has also been created to establish the cause and consequences of all the events in Donetsk yesterday.

The official spokesman of the anti-terrorist operation confirmed that the previous night several dozen trucks from Russia were trying to break through the Ukrainian border in Luhansk region. Border guards maintained forced resistance which resulted in detaining a minibus and two trucks with weapons, explosives and grenade guns. The remaining trucks disappeared in the direction of Antratsyt town.

The spokesman of the anti-terrorist operation also confirmed the information on numerous Caucasian representatives among the terrorists. According to recent reports, mercenaries acting in the East now previously committed acts of terror in Crimea.

Vladyslav Selezniov empasized that «by joint effort of the government, civic organizations, sponsors and volunteers all the subdivisions directly participating in active phase of the anti-terrorist operation are properly supplied». At the same time the spokesman added that he understands the importance of involving the public into further monitoring of the use of the named supply and special-purpose material support for Ukrainian special forces.