Kyiv, August 19, 2015. Russia-backed militants launched artillery attacks at residential areas of Maryinka. According to Colonel Lysenko, spokesperson of the Administration of the President of Ukraine on ATO-related issues, the shelling took place at around 1 a.m. A five-month-old girl got abdominal injury as a result of the attack. Ukrainian troops stationed nearby evacuated the infant to Dnipropetrovsk for a surgery. “There is no immediate danger to her life,” said Col. Lysenko at a press briefing at Ukraine Crisis Media Center. 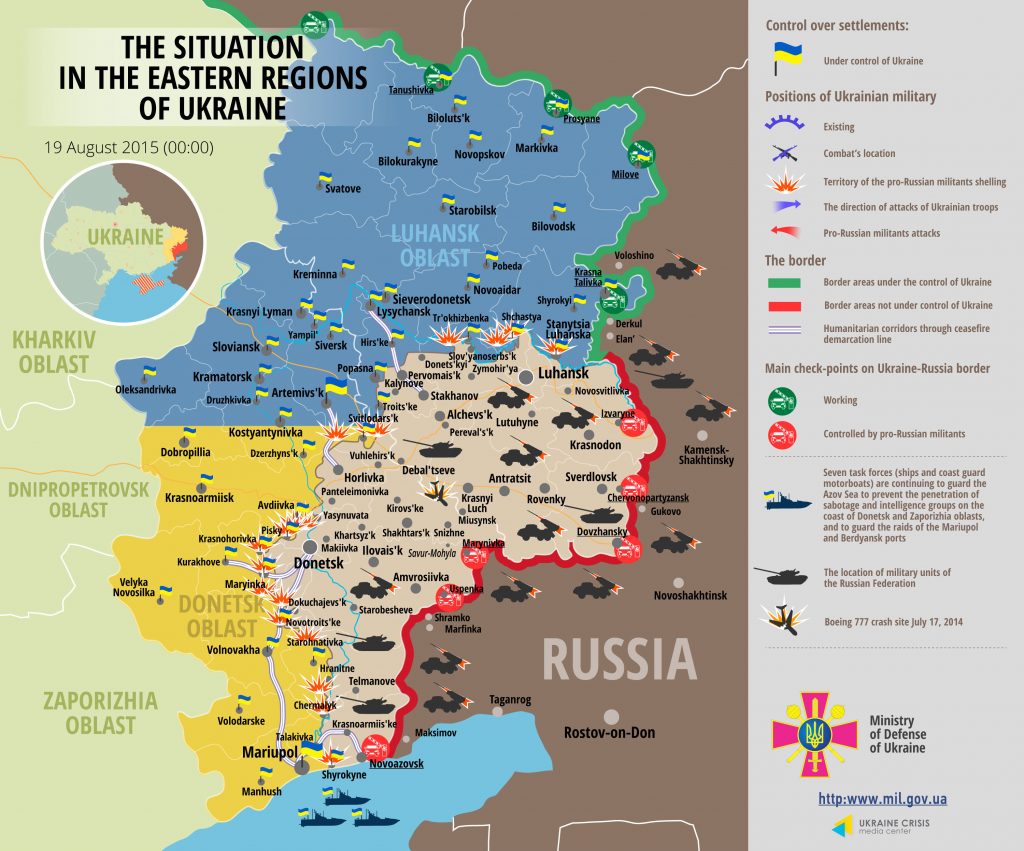 Col. Lysenko reported that situation between Svitlodarsk and Horlivka in the Donetsk sector remains stable; no incidents of heavy arms use have been registered. “The enemy snipers firing on Ukrainian field fortifications south of Luhanske intensified their activities,” he added. The militants mortared Ukrainian forces based in Zaitseve twice in the morning. On the other hand, ceasefire was holding between Dzerzhynsk and Yasynuvata yesterday.

Decreased intensity of combat actions has been observed in the vicinity of Donetsk. “Fire exchange on the frontline continued during the day and night, however the enemy uses heavy weapons less frequently,” explained the ATO spokesman. Russia-backed insurgents keep mortars, tanks and artillery close to the frontline. The militants fired from Grad multiple rocket launchers at Avdiivka at around 11 p.m. Intense standoff continues south of the Donetsk – Dnipropetrovsk road. Moreover, the militants violated ceasefire twice in the area of Novomykhailivka and Berezove from their positions in Olenivka.

In the Luhansk sector, the major hotspots included southern outskirts of Stanytsia Luhanska, Shchastya and Krymske. The militants did not use heavy weapons and reserved to attacks from grenade launchers and mortars. Almost half of provocations occur during the nighttime. “One house and a gas pipeline were damaged and a civilian was injured in the course of the mortar shelling of Stanytsia Luhanska. It was quiet on the frontline between Novotoshkivske and Troyitske,” noted Col. Lysenko.

In the Mariupol sector, the militants fired at Ukrainian positions west and east of Dokuchayevsk using 122 mm and 152 mm howitzers. They have also used 120 mm mortars near Chermalyk and Shyrokyne for the first time in a long period of time. The attacks were short-lasting and conducted from the close distance of up to five kilometers. “Our positions east of Mariupol are very well fortified. The militants cannot engage with the Ukrainian Army directly. A total of 268 fortifications have been constructed on the three defense lines. Twenty regions and 5,000 workers took part in the construction. The first line is controlled by the Ukrainian Armed Forces, while second and third ones by the National Guard units,” said Col. Lysenko.

Ukrainian Armed Forces did not incur any casualties; three servicemen were wounded in action over the past day.

Ukrainian security services detained three militants in Kramatorsk who were cooperating with the self-declared “Donetsk People’s Republic” (“DPR”) even after the Ukrainian restored control over the city. The operatives seized four pieces of homemade explosive, F-1 grenades, a bulletproof vest, a rifle and daggers during the search of the militant’s house.

Another militant cell was uncovered Kostiantynivka and Druzhkivka. The perpetrators took part in capturing local administrative buildings last year. Four group members were detained and two more were put on wanted list. During the search of their houses, the law enforcers seized a Simonov carbine with an optical sight, 13 rifles, large number of ammunition rounds, camouflage uniforms, money and golden jewelry. Furthermore, the law enforcement detained five citizens of the Russian Federation in Kyiv who used to be members of the international terrorist organization, including one member that was on the Interpol wanted list. Policemen seized an arms arsenal from the suspects’ flat.