Kyiv, August 21, 2015. Intensity of combat actions in the Luhansk sector has slightly decreased. “Not a single ceasefire violation by Russia-backed militants was registered in the area of Stanytsia Luhanska and Shchastya. Ukrainian troops did not incur casualties over the last day,” said Colonel Andriy Lysenko, spokesperson of the Administration of the President of Ukraine on ATO-related issues, at a press briefing at Ukraine Crisis Media Center. 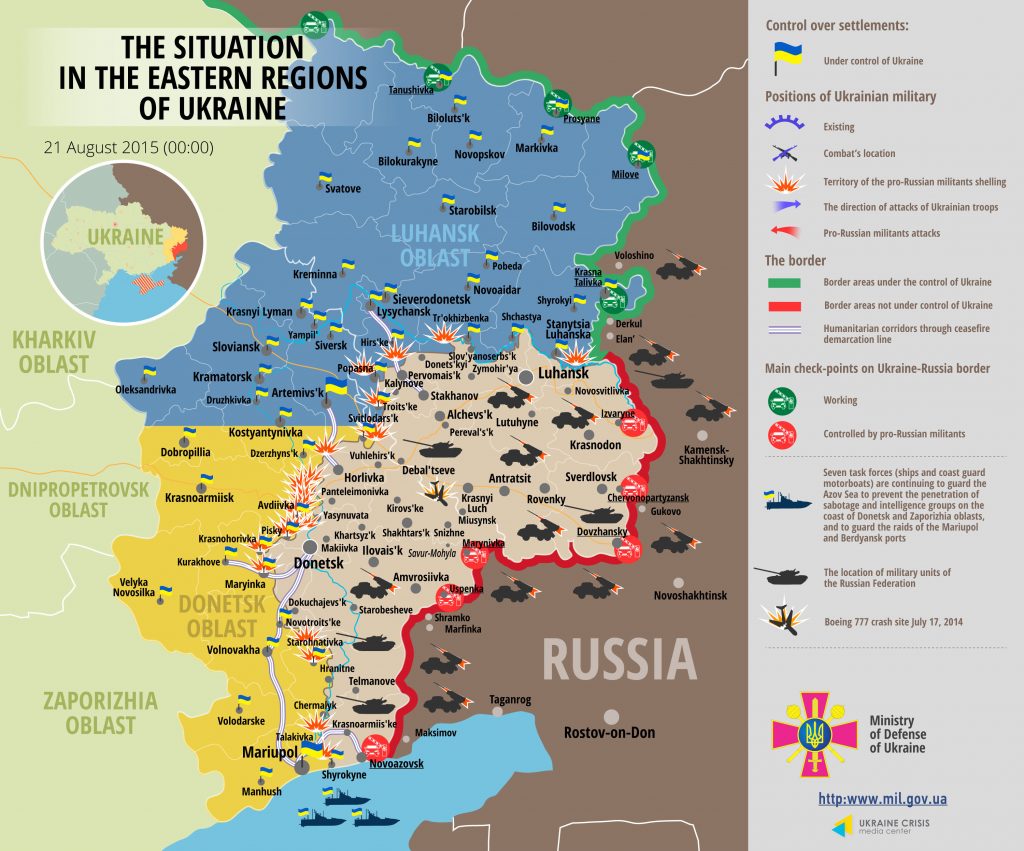 The epicenter of military action in the Luhansk sector was Zolote – Popasna – Troyitske section. Militants amassed a large group of military hardware in Pervomaysk and on its outskirts. They also fired 20 missiles from the Grad multiple rocket launcher on Ukrainian fortifications at around 1 a.m. Two artillery attacks at Ukrainian positions from 152 mm howitzers were registered in the same area in the evening. Two more incidents occurred in other parts of Luhansk region. “Enemy mortar shelling took place near Bolotene five kilometers away from the Ukraine-Russia border. A short-lasting provocation also took place in the area of Krymske,” reported Col. Lysenko.

In the Donetsk sector, ceasefire was generally holding in the area of Svitlodarsk and Horlivka, as well as near Dzerzhynsk. The militants held four provocations near Luhanske and Mayorsk with small arms. However the situation is quite tense on the frontline stretching from southern Horlivka to Donetsk. Militants conducted four massive artillery attacks on Ukraine’s first and second defense lines near Troyitske, Novobakhmutivka, Novoselivka Druha and Kamyanka. According to Col. Lysenko, howitzers of pro-Russian insurgents are deployed to Yasynuvata. The situation remains unchanged in the area of Donetsk proper. “Incessant fighting is ongoing on the frontline both in the daytime and at night. But militant groups almost do not use heavy weapons. It was quiet south of Donetsk yesterday,” noted the ATO spokesman.

In the Mariupol sector, militants reserved to long-range artillery. Col. Lysenko reported that the Russian proxies did not conduct any preparations for a large-scale offensive. The hotspot in the region was a 10-kilometer-long frontline section north of Starohnativka. Militants conducted four attacks from heavy mortars and howitzers. “Two armed incidents took place further to the south near Orlovske and Lebedynske where the enemy used mortars and 122 mm artillery,” said Col. Lysenko.

Ukraine’s Security Service captured pro-Russian separatists who plotted to create a self-declared “people’s republic” in Mykolayiv region. Col. Lysenko explained they were going to spread a series of anti-Ukrainian propaganda materials on the eve of the Independence Day on August 24 and that this was done “under direct order of Russian security services.” The operatives seized firearms, a homemade explosive, grenades, communication equipment and separatist literature.

Ukrainian law enforcement detained a female taxi phone operator in Dzerzhynsk who was passing information on Ukrainian forces activities to the militants. Another militant informer and an artillery spotter was detained in Luhansk region.

Furthermore, the operatives detained one more militant in Sloviansk who took part in seizing administrative buildings in the spring of 2014.

Police discovered an arms cache close to Starobilsk, which contained an anti-tank guided missile, a machine gun, around 1,500 rounds of ammunition of various calibers, 250 under barrel grenade launchers, a mine and three machine gun belts were seized. Law enforcement staff also seized grenades, ammunition and a grenade launcher from two residents of Luhansk region. Meanwhile, a resident of Shchastya voluntarily gave up the ammunition that he found in an abandoned house, namely a grenade launcher, grenades and rounds. “A person who voluntarily gives up weapons, ammunition, explosives and explosive devices to law enforcement agencies is to be freed from criminal liability for illegal storage of these items,” emphasized Col. Lysenko.