Kyiv, August 22, 2015. Russia-backed militants used mostly heavy artillery to attack Ukrainian positions, as the strongholds near Bohdanivka, Prokhorivka, Starohnativka, Lebedynske and Vynohradne to the east of Mariupol were attacked. Residential areas of Prokhorivka came under fire from howitzers as well, said Colonel Oleksandr Motuzyanyk, spokesperson of the Administration of the President of Ukraine on ATO-related issues, at a press briefing at Ukraine Crisis Media Center. 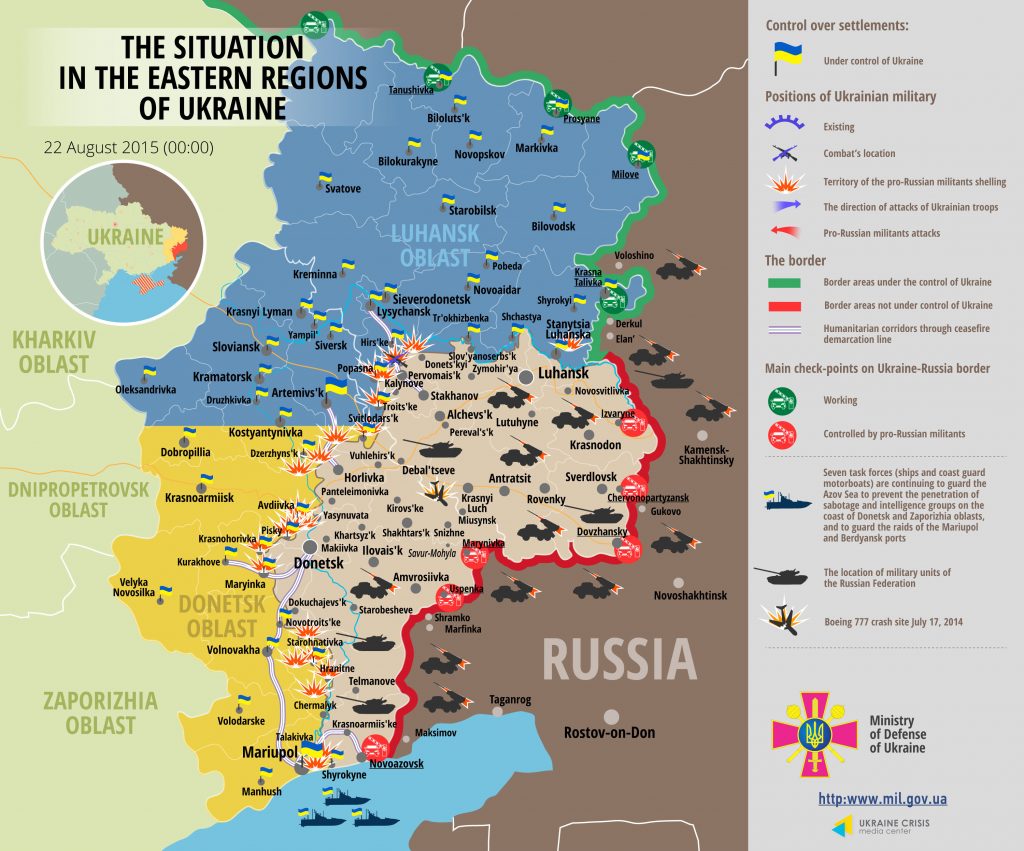 According to Col. Motuzyanyk, the militants also widely used prohibited artillery in the Luhansk sector near the village of Valuyske. On the other hand, ceasefire was generally holding at the Luhanske – Shchastya – Triohizbenka – Krymske section. Militant subversive group made an attempt to assault Ukrainian position near Zolote, but the Ukrainian servicemen fought off the attack. Also, a number of provocations were registered in the western parts of Luhansk region.

In the Donetsk sector, the militants were most active near Donetsk airport, Krasnohorivka and Maryinka. Several ceasefire violations incidents took place to the east of Svitlodarsk water reservoir and near the village of Zaitseve to the north of Horlivka. By contrast, it was relatively calm in the outskirts of Horlivka proper. Further south, near the Rozivka village, Ukrainian troops were attacked with large-caliber artillery.

Four flights of militant unmanned aerial vehicles (UAVs) were observed in the ATO area yesterday. Also, Ukrainian border guards detected one UAV flight and a Russian Mi-8 helicopter at the administrative line between the Kherson region and Russia-occupied Crimea.

Ukrainian Army did not incur any casualties; eight servicemen were wounded in action over the past day.

According to Col. Motuzyanyk, Lysychansk police with Ukraine’s Security Service (SBU) detained a militant who was part of a group of miners who had set up bombs at 20 bridges, including the one near the “Lysychansk” railway station.

Also, security services established identities of individuals involved in attacks of Sartana village on the night of August 16. A local resident turned out to be a fire spotter of the militants.