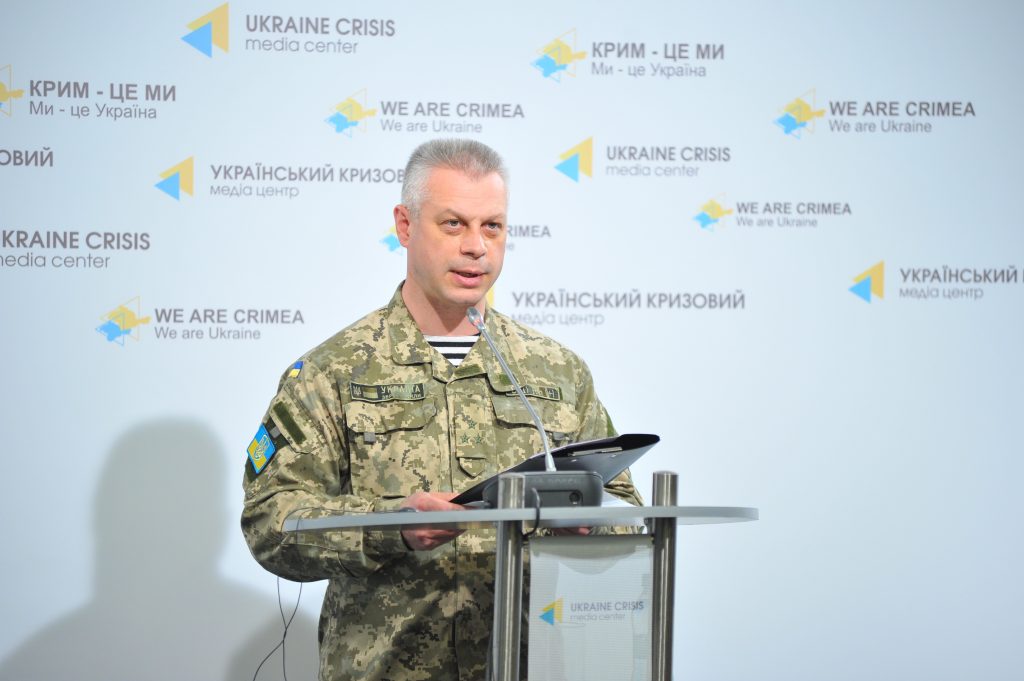 Kyiv, Aug. 24, 2015. Over the last 24 hours, there were no fatalities among the Ukrainian servicemen due to active military operations, said Colonel Andriy Lysenko, the spokesperson of the Administration of the President of Ukraine on ATO-related issues, at a press briefing at Ukrainian Crisis Media Center. 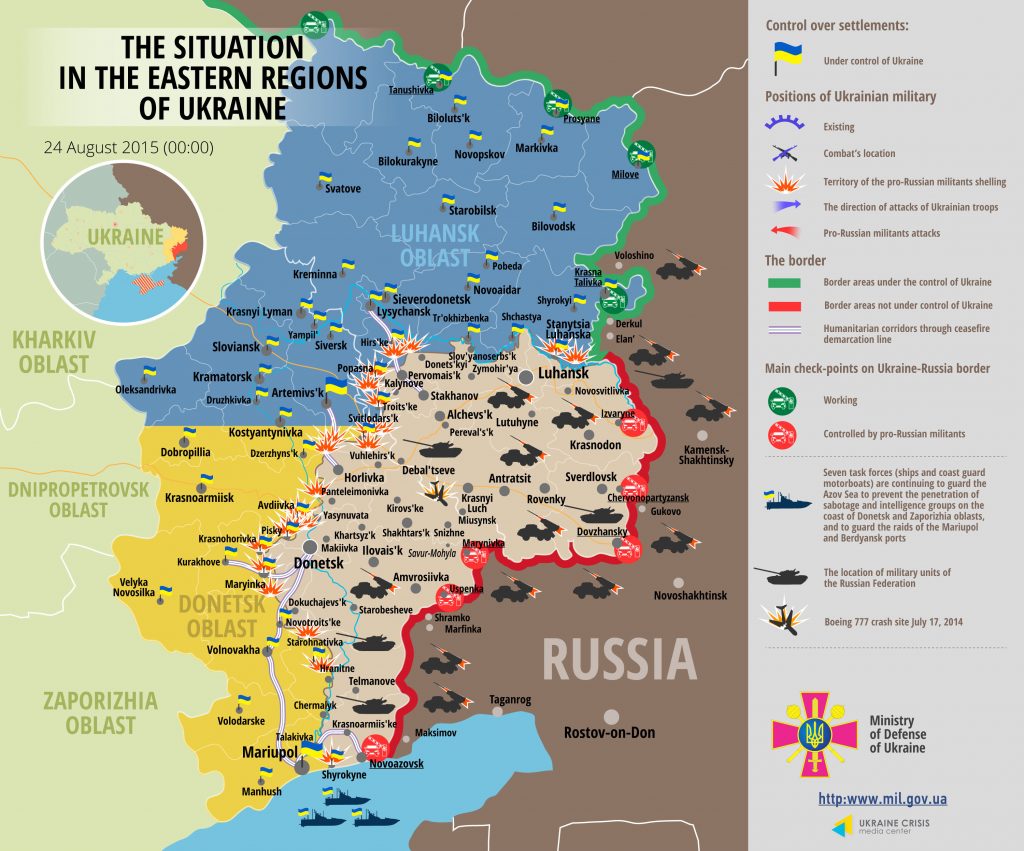 In the Luhansk sector, Ukrainian forces registered seven episodes of ceasefire violations by Russia-backed militants. From the right bank of the Siversky Donets River, The militants fired at the Ukrainian servicemen from mortars and howitzers. One artillery shelling was observed at the border village of Bolotne, while one mortar attack was recorded near Shchastya.

The section of the battle line from Stary Aidar to Novotoshkivske  was quiet. “At the western section of the Bakhmut road – near Orikhove and Zolote – the militants opened fire four times at the positions of Ukrainian force from 120-mm mortars. At the defensive line near Popasna – Novozvanivka – Troitske – Sanzharivka pro-Russian fighters opened fire many times at Ukrainian forces using mortar and artillery. Around 7 p.m., according to the JCCC, there were no less than 40 missiles from Grad multiple rocket launchers fired at Ukrainian positions,” noted the ATO spokesperson.

In the Donetsk sector, the situation grew worse in the area of Svitlodarsk .  Russia-backed militants shot at the Ukrainian forward positions in Luhansk and Lozove using large-caliber artillery.  Near Horlivka, the situation remains quiet, the only point of tension is the village of Zaytseve, where militants have delivered mortar fire twice. At the section of the front from Horlivka to Yasynuvata, the Ukrainian military registered only one incidence of ceasefire violation outside of Verhnyotoretske. “In the north-west vicinity of Donetsk, from Avdiyivka to Piski, it was rather during the day, while during the night the enemy attacked with mortars and howitzers,” said Col. Lysenko

In the Mariupol sector, over the last 24 hours the militants fired five times using mortars and once using 152-mm artillery.

Over the last 24 hours, in the ATO zone Ukrainian border guards registered the flight of one militant unmanned aerial vehicle (UAV) .

One Ukrainian serviceman was wounded in action over the past day.

Ukraine’s Security Service (SBU) arrested a militant accomplice, who was responsible for regulating their artillery fire on Avdiivka. “The law-breaker observed the movements of a Ukrainian military truck convoy and transferred the information to a member of the staff of the self-proclaimed “Dontesk People’s Republic” (“DPR”) in Makiivka. In addition, the arrested man had plans to destroy ATO force equipment on the eve of the Independence Day of Ukraine using an anti-tank mine,” informed Col. Lysenko.  In Odesa, the SBU officers intercepted threepersons who are believed to be connected to a group responsible for the preparation of explosions on railway and bus stations in the city.

“A powerful explosive device with a clock mechanism, components for manufacturing other infernal machines, as well as ammo rounds were seized from the sabotage demolitionists. Apart from this, in Donetsk region the SBU discovered a weapons and munitions cache: a manual grenade thrower, 10 grenades and several hundred rounds of ammunition of different caliber were buried in the yard of a local,” concluded the ATO spokesperson.