Kyiv, August 25, 2015. Russia-backed militants fired upon Ukrainian defense fortifications near Stanytsia Luhanska and Shchastya using grenade launchers and mortars at night.. “Fighting near Bakhmutska road has considerably intensified. Moreover, enemy artillery shelling happened near Novotoshkivske and Tryokhizbenka for the first time in a while,” said Colonel Oleksandr Motuzyanyk, spokesperson of Administration of the President of Ukraine on ATO-related issues, at a press briefing at Ukraine Crisis Media Center. A tense situation was also noted in Krymske and Nyzhne. Militant mortars and artillery are amassed on the frontline and are actively used both during the daytime and at night. At the junction between Luhansk and Donetsk regions, there were several militant provocations near Troyitske and Sanzharivka. “The enemy was firing from the South-East, militant groups were not using heavy weapons,” added Colonel Motuzyanyk. 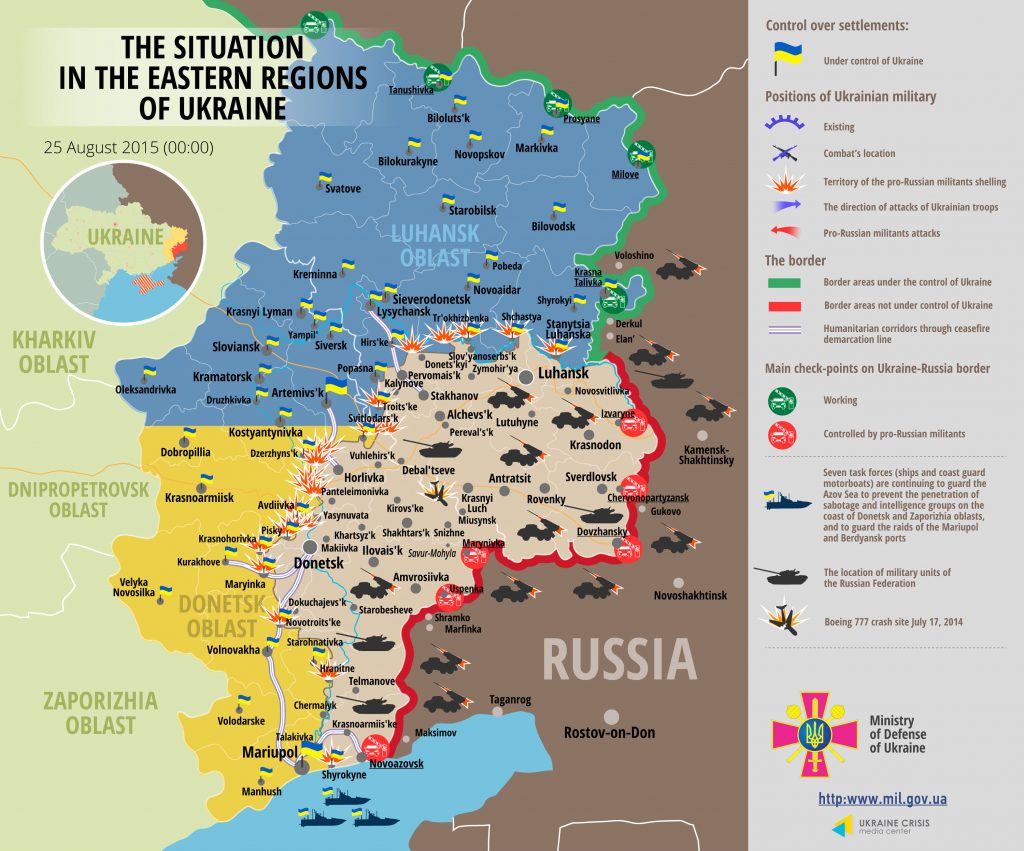 In the Donetsk sector, a period of calm was held in the area of Svitlodarsk and Horlivka. Several skirmishes took place in Luhanske, Mayorsk, Kirove and Novhorodske yesterday at night. Between Horlivka and Donetsk, militants instigated several provocations East of the railway section Kostyantynivka – Yasynuvata. According to Colonel Motuzyanyk, the major hotspot continues to be the area of Donetsk. “Although militants use heavy weapons less frequently, skirmishes on the frontline last almost incessantly. Additionally, the residential areas of Avdiivka and Krasnohorivka came under militant artillery and mortar fire,” said ATO spokesman. No combat actions were conducted South of Donetsk.

In the Mariupol sector, Novotroyitske was epicenter of fighting in the area. Militants conducted a short-lasting, but powerful attack on Ukrainian positions using an infantry fighting vehicle and grenade launchers. Other short-lasting militant provocations took place near Hranitne and Shyrokyne. Militant groups have not been using heavy weapons. “It was quiet in the area of Starohnativka yesterday for the first time in several weeks,” noted Colonel Motuzyanyk. Two Ukrainian servicemen were killed in action over the last day and nine were wounded in action.

An explosion occurred on the street in Volodarske, as a result a four-year old boy was killed and three more children were wounded. As the investigation into the circumstances of the tragedy started, a grenade from a hand-held grenade-launcher was found in the apartment of the mother of the slain child. “We call on our citizens to be attentive and to not keep weapons, ammunition and other explosives at home,” emphasized Colonel Motuzyanyk.