Andriy Lysenko: Insecurity in the ​​ATO area is only near Donetsk

Kyiv, September 5, 2015 – Yesterday the enemy for several times opened fire at the positions of the ATO forces from the territory of the destroyed Donetsk airport and the village of Spartak. At the front lines of defense in Krasnohorivka, a skirmish between militants and the Ukrainian military occurred. The most strained situation was near Maryinka, where the enemy applied 82-mm mortars twice. This was said by Colonel Andriy Lysenko, spokesperson of Administration of the President of Ukraine on ATO-related issues, at a press briefing at Ukraine Crisis Media Center. 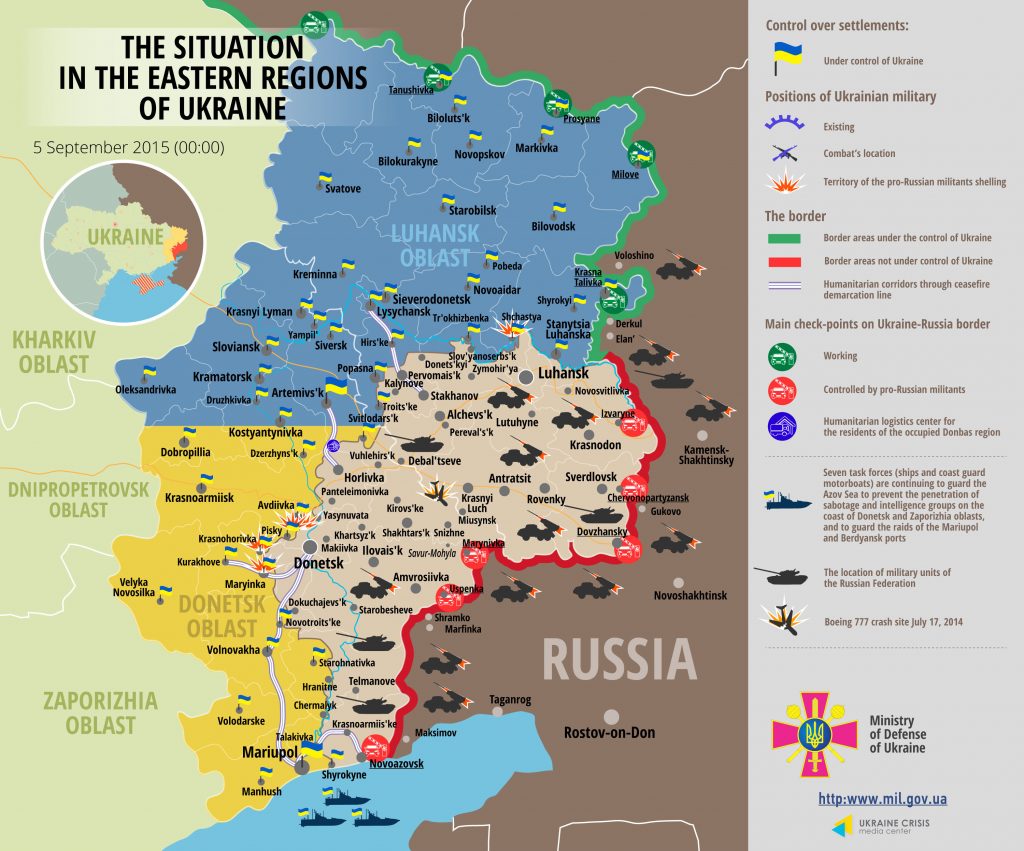 Also Colonel Lysenko said that yesterday there was one enemy provocation near Shchastya town. “For about 10 minutes militants were shooting with small arms from the right bank of the Siversky Donets River,” said the spokesperson of Administration of the President of Ukraine. At the same time, in the Mariupol sector, the truce was fully observed.

Ukrainian Armed Forces did not incur casualties over the past day; two soldiers were killed by grenade tripwire trap. According to Andriy Lysenko, this happened to the north of Horlivka.

Colonel Lysenko said that, in Starobelsk district of Luhansk region, Ukrainian security forces found an arsenal which contained two missiles for anti-aircraft gun and missile system 2K22 Tunguska, one RPG-26, two AK assault rifles and magazines for them, 18 crates with TNT, more than 2 thousand cartridges of various caliber and other ammunition. Weapons were confiscated.

Additionally, the spokesperson of Administration of the President of Ukraine on ATO-related issues reported that Ukrainian security services blocked several bank accounts used by Evgeniy Zhylin, the leader of the criminal organization “Oplot”, with more than ₴1.5 million on them.

Colonel Lysenko said that demobilized tankers returned to Dnipropetrovsk region from the ATO area, where the latter with dignity were performing combat missions for a long time.