Kyiv, December 1, 2015. Ceasefire violations were recorded in the ATO zone yesterday only in Donetsk sector. One provocation was instigated near Luhanske settlement and four other took place in the vicinity of Mayorsk, involving small arms and grenade launchers. The situation is the most difficult on the western outskirts of Donetsk.

“Yesterday pro-Russian militant groups started shooting randomly at the Ukrainian position at 3:00 p.m. and continued intermittently until midnight,” said Presidential Administration spokesperson on ATO related issues Colonel Andriy Lysenko at a press briefing at Ukraine Crisis Media Center. One serviceman of the Armed Forces of Ukraine died yesterday in combat and another one was wounded. “The incident happened in Mariupol sector near Hranitne village where ATO forces’ truck tripped an anti-tank mine,” said the spokesperson. 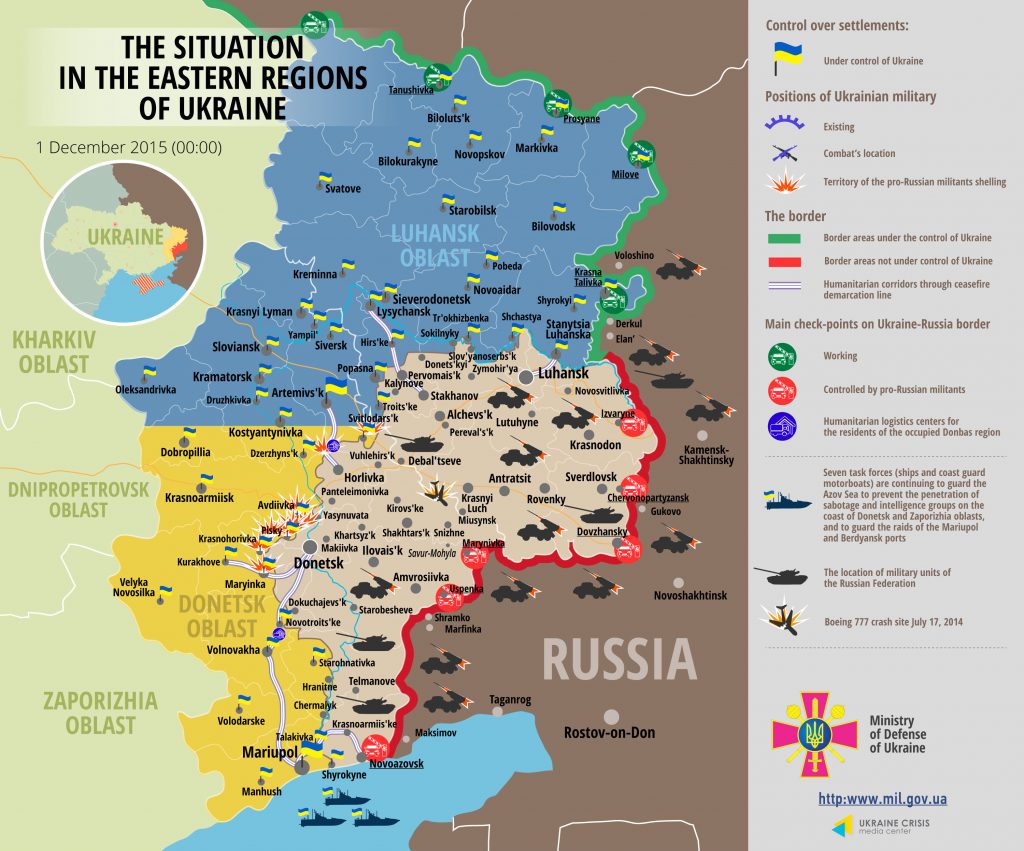 A defender of the Donetsk airport, officer of 81th airborne brigade Andriy Hrechanov with nom de guerre ‘Rakhman’ was released from captivity.  “It took 18th attempts to successfully exchange ‘Rakhman’ into a major of the Armed Forces of the Russian Federation from the occupational force in Donbas, Nikolai Starkov,” said Col. Lysenko. The spokesperson reminded that Ukrainian border guards detained the latter this summer near Berezove.

The spokesperson emphasized that the situation with human rights on the temporarily uncontrolled territories in Luhansk and Donetsk regions remains difficult. For instance, there are known facts of civilians’ forced labour as well as hostages’ torturing. Ukraine Security Services encountered a man with multiple injuries not far from the ATO forces’ positions near Novhorodske settlement in Donetsk region. “The man turned out to be a Horlivka resident who said the militants made him dig trenches and build fortification for breaking a so-called ‘curfew’,” said Col. Lysenko. Later militants shot him in arm and cracked his head with a gunstock. The wounded is safe now.

Ukrainian Special Forces managed to prevent an act of terror on the territory of a military base in Rubizhne using explosives, grenade launchers and light arms. The chief of the gang was a militant of the self-proclaimed ‘Luhansk People’s Republic’ (LPR) from Lysychansk. A militants’ informer was detained in Volnovakha, Donetsk region. “The criminal was regularly providing militants with information on Ukrainian Armed Forces’ armor movement near Novotroitske over the phone from August to September 2015,” elaborated the spokesman.

Another militant of one of the self-proclaimed republics joined a Security Service program ‘You are waited for at home!’ and returned to the territory controlled by Ukraine.

Law enforcement officers found a package containing drugs worth over one million hryvnias in Artemivsk. The plan was to transport 400 grams of methadone hidden in a parcel to the temporarily occupied territory. Moreover, military reconnaissance found a cache with ammunition and explosives in Mariupol. “Four anti-tank mines, three TNT blocks and two electrical fuse heads. According to the information received these weapons were intended for a sabotage attack at the key objects of infrastructure before local elections,” said Col. Lysenko.

The spokesperson said that a warming center started functioning at the contact line pedestrian crossing in Stanytsia Luhanska. “Two personal hygiene facilities were opened, and there are a permanent doctor and rescuers on duty. Moreover, people are offered hot tea and cookies. At least 600 people come for help every day,” elaborated Col. Lysenko.