Kyiv, December 2, 2015. In the Donetsk sector grenade launchers were used three times in Luhanske settlement in the ATO zone. Novhorodske settlement on the outskirts of Horlivka became a centre of fighting yesterday. Militants’ snipers were working there and one attack from an APC was recorded. Russia-backed militants attacked ATO forces position twice using an 82-mm mortar launcher, said Presidential Administration spokesperson on ATO related issues Colonel Andriy Lysenko at a press briefing at Ukraine Crisis Media Center. “A firefight of ATO forces with militants took place yesterday night near Avdiivka. The militants moved out of Yasynuvata, but retreated after a 30-minutes fight,” said the spokesperson. He added that “the situation in the western outskirts of Donetsk remained unchanged, as militants’ provocations were traditionally recorded along the entire frontline in this area.” 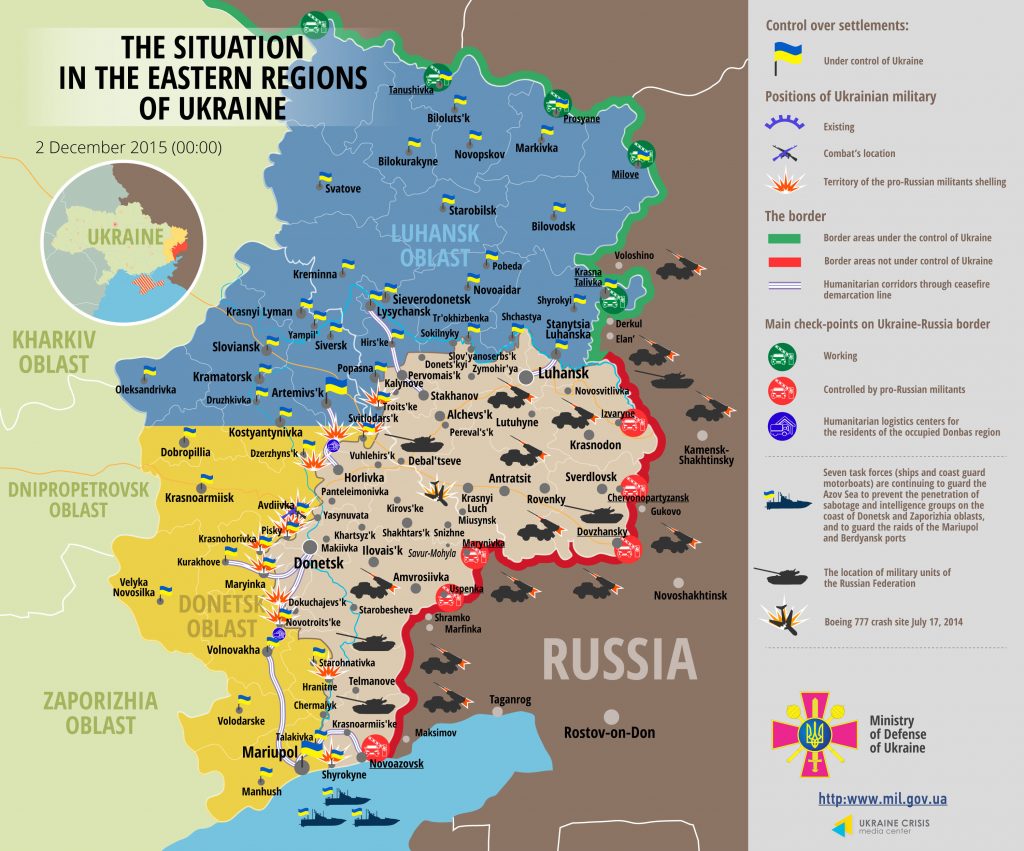 Militants violated ceasefire in vicinity of Troitske settlement in the Luhansk sector yesterday. The biggest number of provocations instigated against ATO forces in the Mariupol sector was recorded in Hranitne, as well as Novotroitske and Shyrokyne. According to Col. Lysenko, one Ukrainian serviceman died in combat yesterday and three troops were wounded.

Col. Lysenko also said that, according to the Main Intelligence Directorate of the Ministry of Defense of Ukraine, chiefs of militants’ advanced detachments are unable to organize mutual support after rotation of Russian troops’ commanding officers. “This results in increased number of the so-called ‘friendly fire’ accidents. Three days ago four injured and corpses of three dead militants were admitted to Donetsk regional hospital,” explained Col. Lysenko.

According to the spokesperson, Ukrainian special services froze Dmytro Liamin’s bank account. Liamin was a self-proclaimed ‘minister of fuel, energy and coal industry of the Luhansk People’s Republic’ up until recently. There were 64 thousand U.S. dollars at the account. Moreover, a weapons cache of a pro-Russian militant was found in Donetsk region, seizing two anti-tank grenade launchers, five ball grenades and over one thousand 5.45mm cartridges.

Col. Lysenko said Ukrainian troops provided escort to children going out of Krymske settlement in Luhansk region to recreational institutions. Moreover, Ukrainian volunteers gave a multifunctional mobile X-ray unit to the Military Medical Clinical Center of the Western Region in Lviv. “There are 33 ATO troops being treated at the hospital now. The X-ray unit will be functioning in neurosurgery operating room, which will aid our doctors in efficient delivering of medical care,” added the spokesperson.