Kyiv, December 4, 2015. Most ceasefire violations over the last day were registered in the Donetsk sector, namely near the Donetsk airport, in Avdiivka, Opytne, Pisky and on the Svitlodarsk salient. “Militant groups fired several shots from a machine gun and from grenade launchers of various types near Luhanske and Lozove yesterday. Four mines were fired from an 82-mm mortar upon our positions near Novhorodske,” said Colonel Andriy Lysenko, spokesman of Presidential Administration on ATO-related issues at a press briefing at Ukraine Crisis Media Center. One provocation was also registered in the Mariupol sector near Shyrokyne. At the same time combat actions were not conducted in Krasnohorivka, Maryinka and in the Luhansk sector. 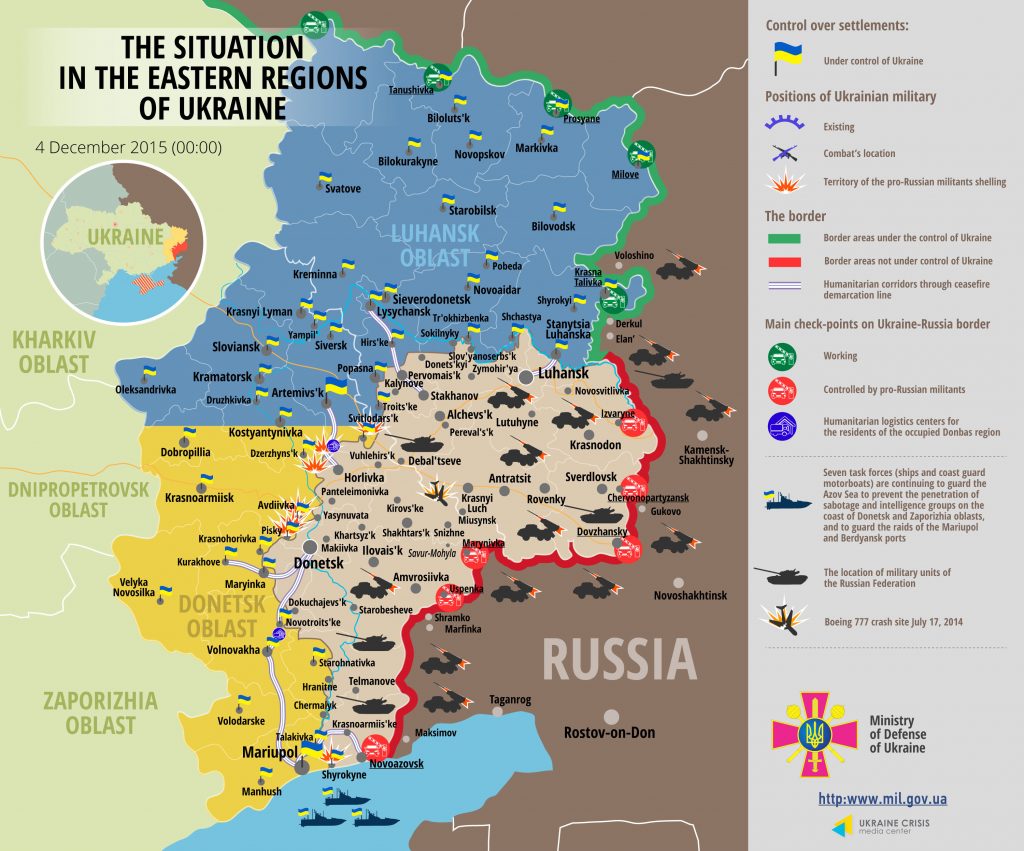 “A Ukrainian military vehicle APC BRDM-2 blasted on a hostile mine near Hnutove yesterday. As a result one Ukrainian serviceman was killed and five more were wounded,” said the ATO spokesman.

Ukraine’s Security Service staff detained a militant of the so-called “Luhansk People’s Republic” (“LPR”) in Rubizhne, he was actively taking part is seizure of buildings of the Security Service’s Luhansk HQ and of the Luhansk Regional State Administration. “He was also unloading the so-called Russian “humanitarian convoys” and said that weapons for militants were inside the white Kamaz trucks,” added Colonel Lysenko.

The ATO spokesman also said that volunteers had passed special protective armor for service dogs of the Luhansk border guard detachment. The armor is to protect them from hits, cold weapons, bullets and shrapnel. “Service dogs have helped discover 26 pieces of weaponry, over 26 thousand pieces of ammunition and over 11 kg of explosive this year,” noted Colonel Lysenko.