Kyiv, December 8, 2015. The area of combat actions in ATO has expands – there were no calm sections along the contact line yesterday, said spokesman of Presidential Administration on ATO-related issues Colonel Andriy Lysenko at a press briefing at Ukraine Crisis Media Center. In the Luhansk sector militants violated ceasefire in Stanychno-Luhansky district and further to the west – near Zhovte and Tryokhizbenka. Fire was conducted from the opposite side of the Siversky Donets. Militants did not use heavy weapons. Four militant provocations were registered on the Svitlodarsk salient in the Donetsk sector. “It happened near Luhanske where adversary was firing from grenade launchers and machine guns. Militants were violating ceasefire on the outskirts of Horlivka along the entire agglomeration perimeter. Thus there was a combat engagement between ATO forces and a hostile subversive group in Zaitseve, mortar shelling in Mayorske and Leninske, militant snipers were firing in Novhorodske,” said Colonel Lysenko. 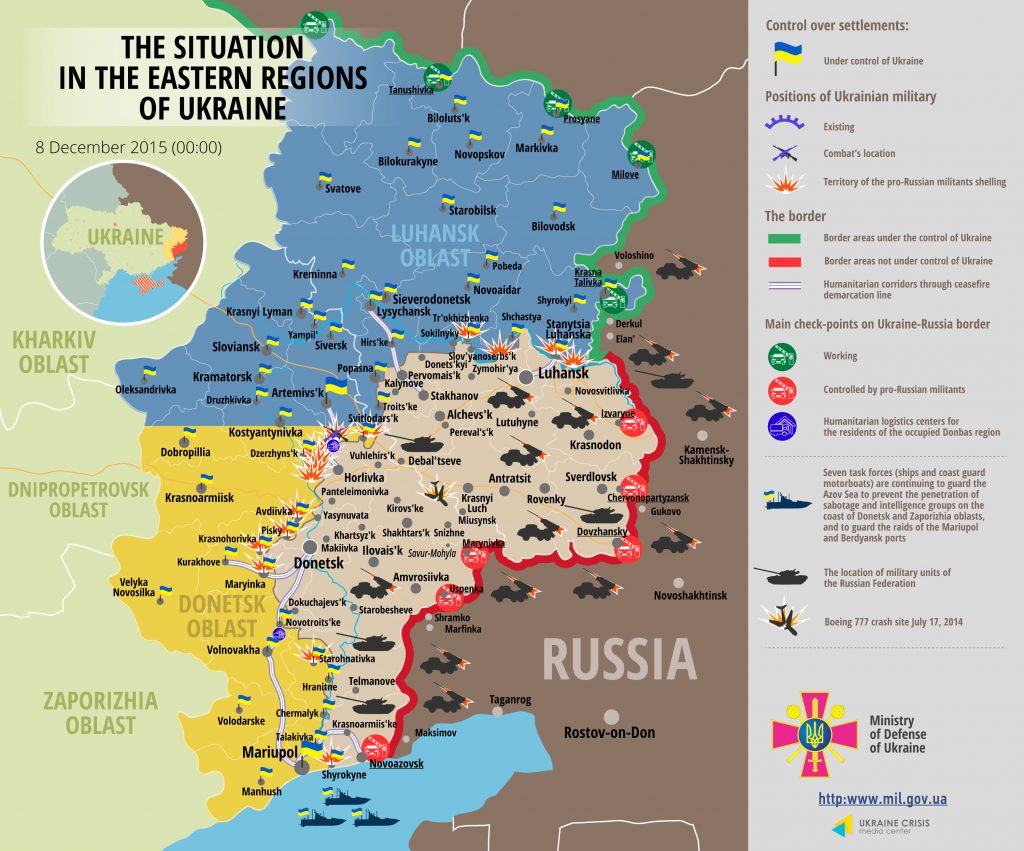 Most turbulent spots were Pisky, Krasnohorivka and Maryinka. “Occupants keep using 82-mm mortars, infantry fighting vehicles (IFVs) and snipers in this section of the front,” noted the ATO spokesman. In the Mariupol sector militants fired in a non-precise way upon Ukrainian positions near Starohnativka and Shyrokyne.

Andriy Lysenko said that according to the information by the Main Intelligence Directorate of Ukraine’s Defense Ministry many militants of the so-called “Donestk People’s Republic” (“DPR) and “Luhansk People’s Republic” (“LPR”) want to breach their contracts. “Six snipers of the so-called ‘Seventh motor-rifle brigade’ deployed to Debaltseve refused to go on training and filed resignation reports. In one of the units of the so-called “Second motor-rifle brigade” deployed to Luhansk 14 of the 22 IFV mechanics – drivers intend to resign,” elaborated ATO spokesman.

Ukraine’s Security Service keeps detaining militant accomplices. Security Service staff detained a so-called “DPR” informer in Mangush near Mariupol yesterday. “The person was recruited by an agent of the Main Intelligence Directorate of the General Staff within the Russian Federation Armed Forces,” noted Colonel Lysenko. In Mariupol and Kramatorsk police detained militants who took part in seizing of administrative buildings in spring 2014 and later were standing guard with weapons in the cities.

Colonel Lysenko also said that a former member of the militant group surrendered to Ukrainian law enforcement staff. The young man from Kostiantynivka repented and returned back home from Donetsk where he was hiding from Ukrainian justice. “He stood guard at the so-called “DPR” check points since April 2014 where he was conducting illegal checks on vehicles and documents but was not holding weapons. That’s why he has a chance of being freed from criminal liability,” noted ATO spokesman.