Kyiv, January 8, 2016. Militants continue shelling Ukrainian positions in the ATO zone along the entire contact line, from the Svvitlodarsk bulge to Donetsk airport. Russia-backed militant groups were the most active on the outskirts of the occupied Horlivka. For instance, they shot at Ukrainian positions near Zaitseve village three times from 82mm and 120mm mortar launchers. In total, eight mortars were launched. Militants instigated a number of armed provocation using small arms and grenade launchers in the same area, as well as Mayorsk and western outskirts of Horlivka, said spokesman of  Presidential Administration on ATO-related issues Colonel Andriy Lysenko at a press briefing at Ukraine Crisis Media Center. 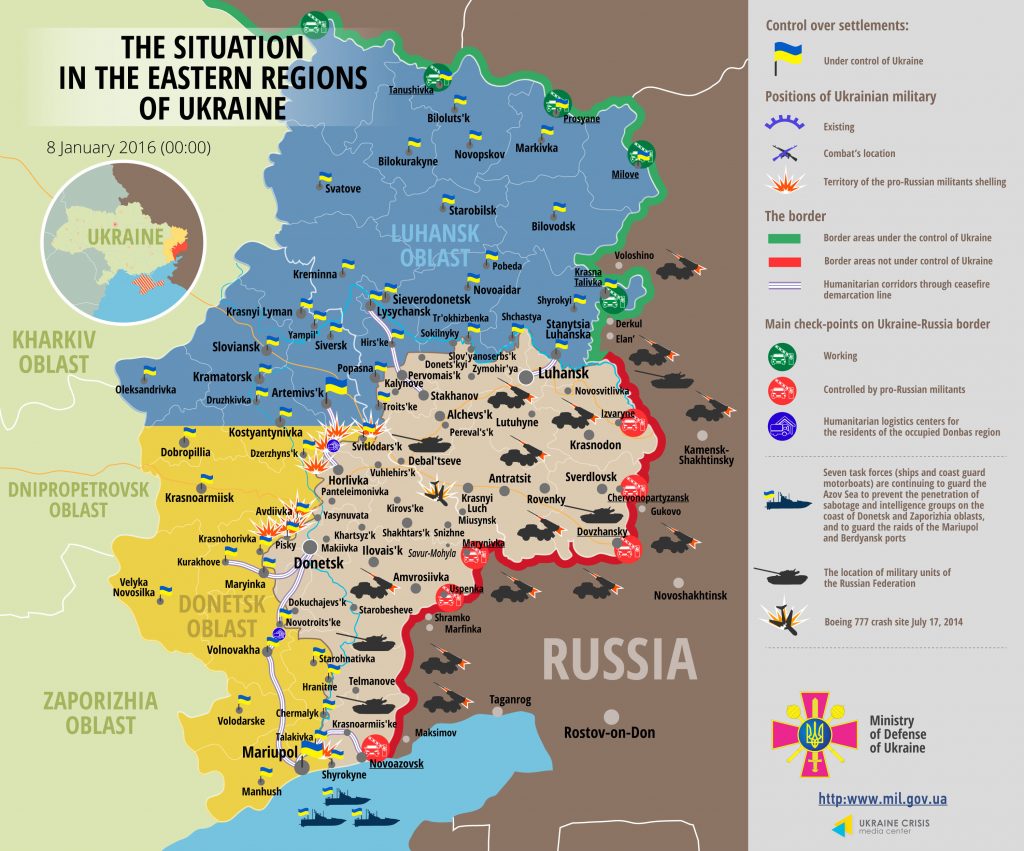 “Another bold hostile provocation took place near Nevelske settlement in Yasynuvata district. Militants started shooting at Ukrainian positions from large machine guns after the sunset. Having found the target, the enemy continued shelling from tank and armored personnel vehicle armament prohibited by the Minsk Agreements,” addedCol. Lysenko. According to the spokesman, shelling did not stop in the vicinity of Donetsk airport the entire day, but no heavy armor was used.

The spokesman said that militants’ mortar attack at ATO troops near Lebedynske village became the only episode of the ceasefire violation in the Mariupol sector. According to Col. Lysenko, “the armistice traditionally held” in the Luhansk sector.

No flights of unmanned aerial vehicles were recorded in the ATO zone yesterday. Nevertheless, two Russian reconnaissance aircrafts were observed along the administrative border with temporarily occupied Crimea. Ukrainian Armed Forces incurred no loss in the past 24 hours, but one serviceman was wounded.

According to Col. Lysenko, on January 6 a newly appointed chief of one of the troops of the self-proclaimed ‘1st Army Corps of Donetsk People’s Republic’, being in a state of alcoholic intoxication, inflicted grievous bodily harm to his subordinate. “Command of the unit is taking measures to hide this fact, and military commandant’s office was suggested not to investigate the incident,” explained the spokesman. Corpses of four militants, who tripped their ownexplosive devices near Svitlodarsk, were delivered to Donetsk yesterday.

Col. Lysenko also said that the situation in Kominternove remains unchanged. Moreover, according to the information he disposes of, the militants refuse to admit representatives of the OSCE monitoring mission to the inhabited locality.