Kyiv, January 21, 2016. Ukrainian troops incurred no casualties over the last day, six servicemen were wounded in action. Most turbulent situation stands in the area of the Donetsk airport. “Two episodes of intense fire exchange between the occupants and ATO forces took place in Pisky. Moreover militants instigated a series of minor provocations along the entire contact line between Avdiivka and Pisky yesterday,” said Colonel Oleksandr Motuzyanyk, spokesman of Presidential Administration on ATO-related issues at a press briefing at Ukraine Crisis Media Center. In the Donetsk sector militants violated ceasefire twice at the Svitlodarsk salient – namely in Troyitske and Luhanske. Three sniper attacks were registered in Zaitseve. In the Luhansk sector militant provocations were not registered yesterday. 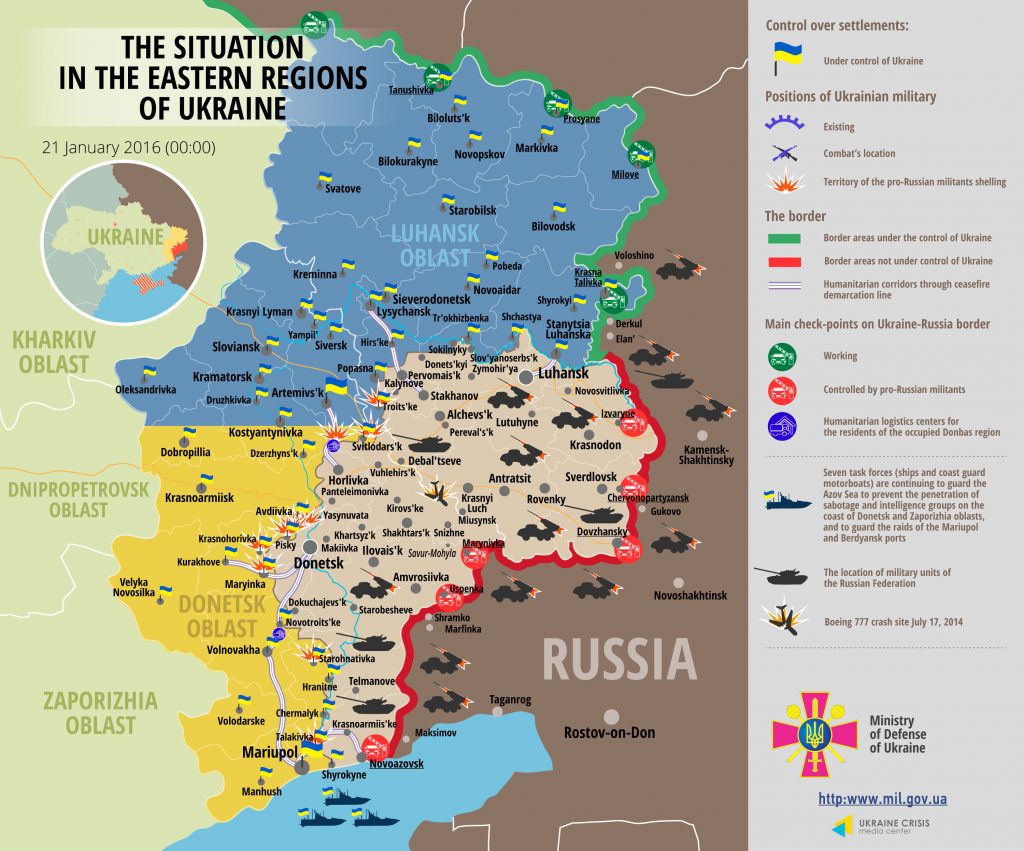 Law enforcement officers detained two residents of Sloviansk who were standing guard at militant checkpoints and searching vehicles from May 2014 until the city was liberated. Thus one of them known under nickname “Kucheryavyi” was part of the so-called “First Sloviansk brigade” militant group of the so-called “Donetsk People’s Republic” (“DPR”). “At the same time a court in Artemivsk district of Donetsk region lifted criminal charges against a militant who had used the program of return initiated by Ukraine’s Security Service ‘They are waiting for you at home!’. The court noted that the man did not take part in combat actions,” said Colonel Motuzyanyk. Ukraine’s Security Service discovered a weapons cache in Novhorodske village located close to the contact line. “Law enforcement staff found three RGD-5 grenades and a pistol with 9-mm rounds of ammunition in a private house,” reported the ATO spokesman.

Residents of the areas of Luhansk and Donetsk region that are not controlled by the Ukrainian government received a consignment of humanitarian aid from charity organizations. “Eight trucks crossed to the occupied territory through control checkpoints ‘Novotroyitske’ and ‘Zaitseve’,” said the ATO spokesman. Ukrainian volunteers delivered warm clothes, medicine, food, a power generator that works on gasoline and rubber boots for the servicemen currently deployed to the frontline positions near Mariupol. Volunteers were escorted by officers from the civil-and-military cooperation group.

Colonel Motuzyanyk also said that Ukrainian policemen who are on service at checkpoints received portable video recorders. “Everything that takes place at the checkpoints will be now recorded on the 24/7 basis,” he said. “It will help avoid conflict situations.”