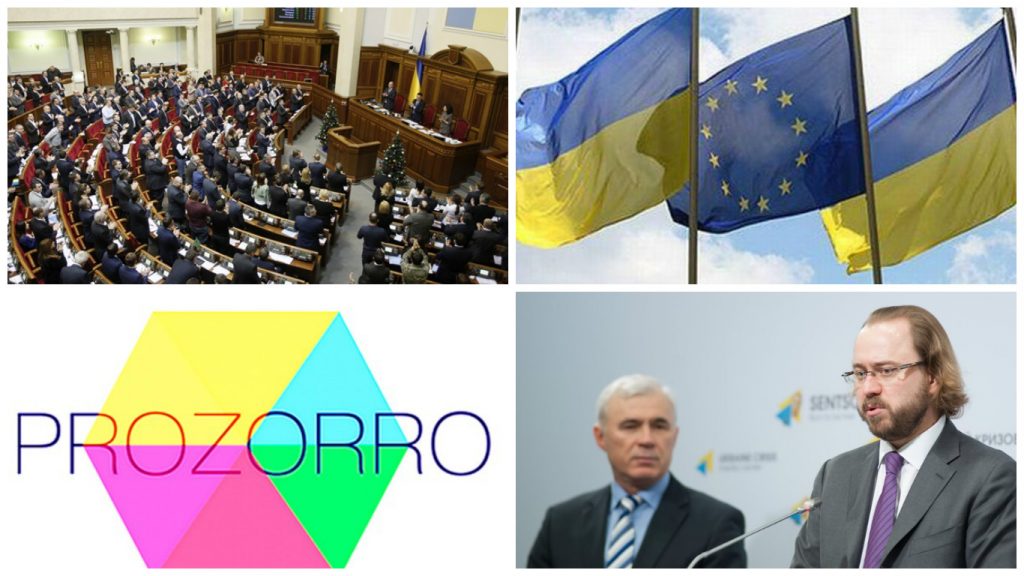 New developments have occurred in the ongoing political saga. It seems the Government will remain in office until at least autumn 2016, despite its work having been recognized as unsatisfactory by parliament. The parliamentary coalition is on the edge of splintering. The Deputy Prosecutor General resigned claiming he is being prevented from changing the system. However the crisis does not mean all reform efforts are at a dead end. Despite the unfavorable environment, last week turned out to be surprisingly effective in terms of adopting decisions on reforms implementation. Also, according to official statistics the economy kept growing over the last two quarters: GDP increased by 0.5 percent in the 3rd quarter of 2015 (in comparison with the previous one) and by 1.5 percent in the 4th quarter.

The Verkhovna Rada (Ukraine’s Parliament) adopted three laws required for “visa-free” travel in the EU. The laws in question widen the powers of the Agency for return and management of illegally obtained assets; set the procedure for special confiscation and arrest of assets as well as amend the law on the prosecutor’s office. The documents introduce a systematic approach to combating and prevention of corruption at an institutional level according to EU requirements. E-declaration of assets of civil servants stands as the last remaining requirement. Ukrainian MPs have twice failed to introduce this mechanism. However the European Union is not ready to compromise: an open e-registry of tax declarations comes first, the decision on visa-free regime comes after that.

The system of under-threshold procurement Prozorro marked its first anniversary, it has already saved at least UAH 680 million for the state budget. The system’s creators have another occasion to celebrate: on February 19 the Law “On state procurement” came into force. Thus starting from April 1 all central-level state agencies will conduct procurement based on Prozorro principles. Starting from August 1 they will be expanded on all holders of budget money. E-procurement will be used to purchase goods and services in the amount of over UAH 200 thousand and UAH 1.5 million respectively. It is expected that UAH 5 billion will be saved in 2016.

As the next logical step to proceed with the reform is that Parliament should ratify Ukraine’s motion to join the WTO GPA agreement. Ukrainian producers will thus get access to state procurement of all countries that take part in the agreement.

Transparent reimbursement of value added tax is a key demand from businesses. The first step in this direction has been made. The Cabinet of Ministers adopted a resolution that drastically changes approaches to VAT reimbursement. It is to be reimbursed in chronological order – those who registered earlier will get reimbursement earlier. The State Fiscal Service will place respective registration lists on its website. First lists are likely to be published already next week.

Open registry is another step on the way towards a transparent system of tax administration and combatting corruption. Abuses often result from personal influence on managerial processes by State Fiscal Service staff.

At the same time, further steps to simplify and automate VAT reimbursement are being discussed in the Parliament.

Ukraine’s Finance Ministry started checks on one of the most sensitive areas of the budget expenditures – social benefits. The Cabinet of Ministers defined the procedure of checks in order to verify eligibility of all the current grantees. The Ministry of Social Policy, Pension Fund, and local authorities are also involved in the control and verification process.

After months of effort, the basis of privatization of state-owned property in Ukraine has finally been voted on successfully. After the President signs the law, advisors will be engaged in selling large enterprises. The process itself is to become more transparent, and state(s) recognized as aggressors by Ukraine will not be able to take part in it. It is expected that the law in question will start large-scale privatization.

The rules for both the sale of state property and for its management should change. These intentions are confirmed by the bill, which Parliament approved  in general and sent to the President. All major state and municipal companies are ordered to undergo an annual independent audit and publish extended reports on their activities. In addition, independent oversight boards with significant powers will be created at state and municipal companies. This should lead to a more efficient and transparent activity and reduced corruption.

Meanwhile, the government is looking for new leaders of large state enterprises according to the Prime Minister.  Among others, these are state companies “Elektrotyazhmash”, “Ukrenergo”, “Centrenergo”, “Ukrspirt” and “Ukrposhta”. The application deadline is 30 days.

The country will have one more modern highway. Ukraine has gained access to a 560 million USD loan from the International Bank for Reconstruction and Development (part of the World Bank) on development of its road network. The loan will go to improve part of the Poltava-Kharkiv highway M-03 Kyiv-Kharkiv-Dovzhanskyi.

An important victory also occurred in the airspace sector. The European Aviation Safety Agency (EASA) recommended the use of two air routes over the Black Sea, proposed by Ukraine   in a series of measures to restore the use of air routes in the area. This technical solution is important for Ukraine both politically and economically, as it will reduce costs for airlines and air routes in flight information regions of neighboring states.

The recertification of judges began in Ukraine. Judges will take tests to confirm their professional knowledge. In case of successfully passing the tests (theoretical and practical parts), the High Qualification Commission will examine judges’ records for any unlawful activities. If a judge fails some of these steps, they will have to undergo retraining at the National School of Judges.

State banks must become more efficient and competitive. The state’s role in their management will change.  These structures should be devoid of political influence and functions according to conventional banking market rules. The Ministry of Finance explained how it will be done in the Strategy of the state banking sector.

The decision of the National Bank of Ukraine to liberalize rules on the use of electronic money also meets modern requirements. Now, Ukrainian citizens can legally get money from abroad by crediting to a Ukrainian bank account.