Kyiv, March 6, 2016. Fifty two armed provocations were registered along the entire contact line in the ATO zone over the last day. Most tense situation was holding in areas south and east of Avdiivka. “Occupants fired over 60 mines of various calibers upon Ukrainian positions. Enemy was firing from the 122-mm “Gvozdika” self-propelled artillery system near Avdiivka. Militant groups used 82-mm mortars twice in Zaitseve,” said spokesman of Presidential Administration on ATO-related issues Colonel Oleksandr Motuzyanyk at a press briefing at Ukraine Crisis Media Center. Militant attacks and armed provocations were also registered at the Svitlodarsk salient, in Mayorsk and in the area of the Donetsk airport. “A total of 37 hostile attacks took place in the Donetsk sector over the last day,” said Colonel Motuzyanyk. 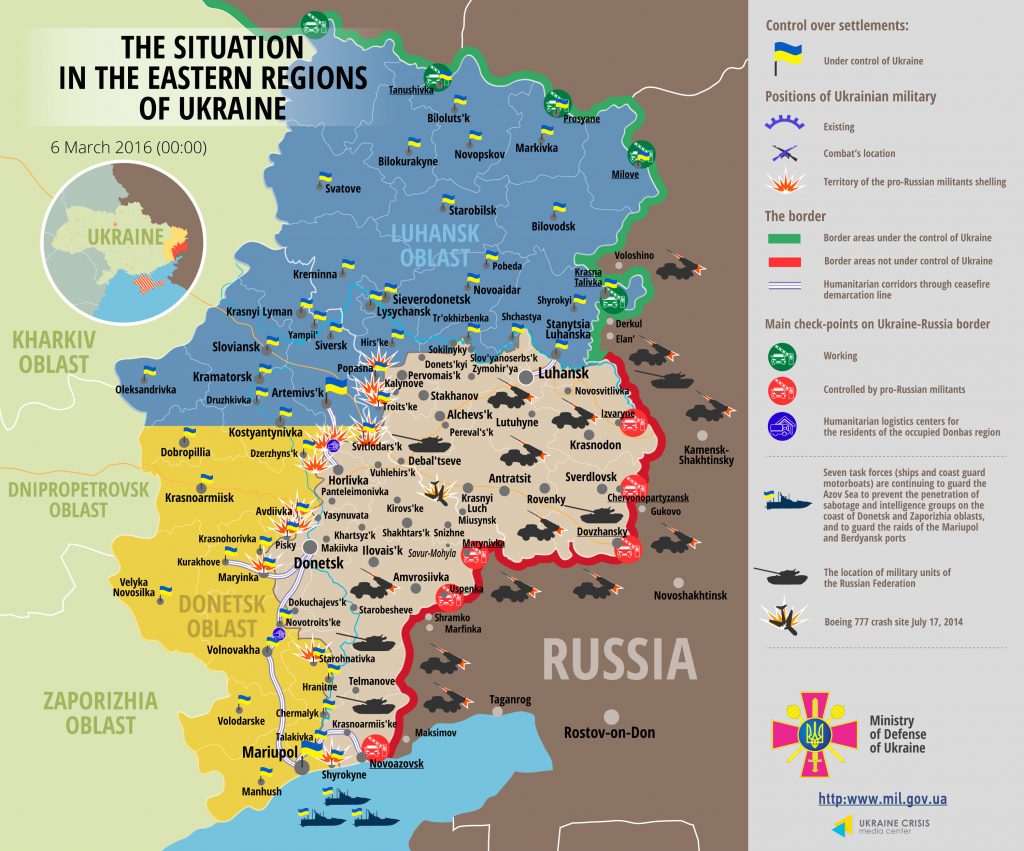 Two Ukrainian servicemen were killed in action over the last day. “It happened near Avdiivka resulting from a hostile shelling of the Ukrainian positions with the use of 120-mm mortars,” reported ATO spokesman.
In the Luhansk sector militants violated ceasefire five times, it happened in Popasnyansky district. “Enemy was using 82-mm mortars. All the attacks took place in the second half of the day, between 1pm and 8pm,” noted the ATO spokesman.

In the Mariupol sector seven attacks upon ATO forces by militant groups were registered over the last day. “Maryinka was the hottest spot yesterday, hostile snipers were firing upon the Ukrainian checkpoint at the road Donetsk – Zaporizhia. Entry and exit through the checkpoint was temporarily stopped in order to avoid civilian and military casualties,” said Colonel Motuzyanyk. He added that by now the checkpoint has restarted its work. Militants also violated ceasefire in Shyrokyne and Starohnativka where the positions of Ukrainian troops were fired upon by a sniper and from weapons mounted on an infantry fighting vehicle.