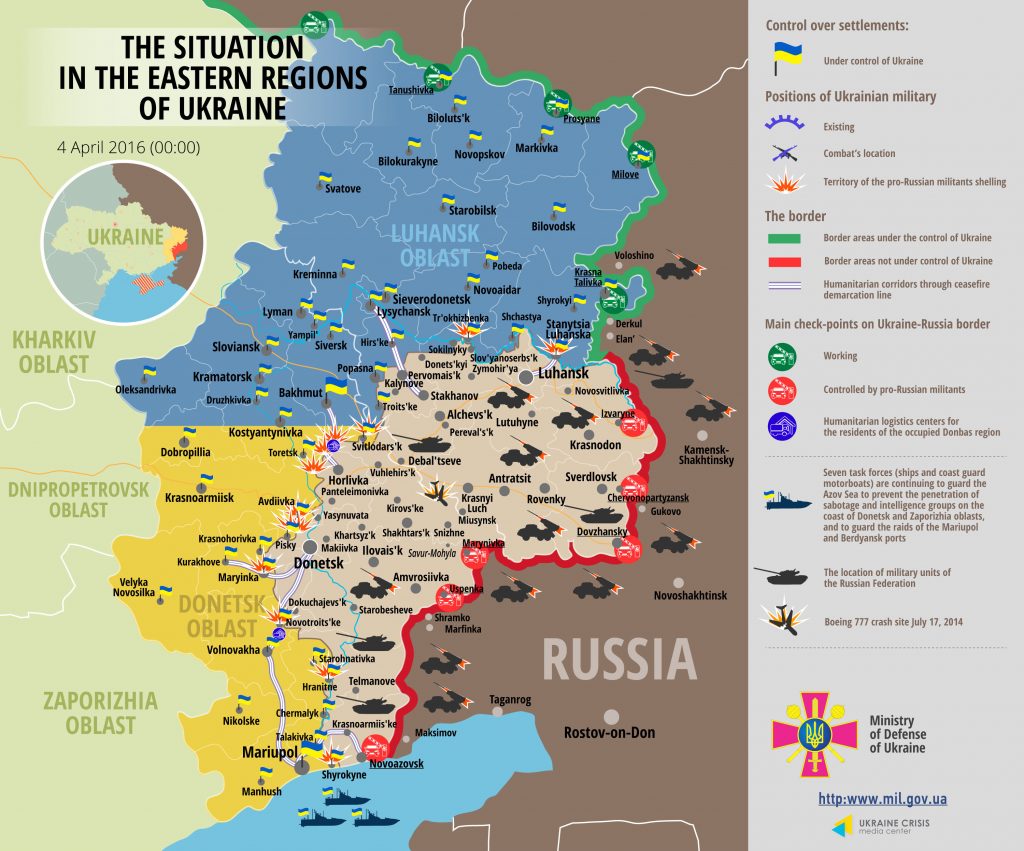 Militants violated the armistice in the Luhansk sector in the vicinity of Stanytsia Luhanska and Triokhizbenka. Avdiivka remains the most intense flashpoint in the Donetsk sector. Militants attacked with mortar fire six times there. “At a rough estimate, at least 30 mortar shells were launched at our positions. Moreover, a number of occupants’ provocations took place near Horlivka and in the vicinity of the Donetsk airport. In total, 16 militants’ attacks took place in the Donetsk sector,” explained Col. Motuzyanyk. The spokesman added that the Chief Intelligence Department of the Ministry of Defense of Ukraine informed of militants’ unmanned aerial vehicle (UAV) registered in the vicinity of Opytne. Russia-backed militant groups violated the ceasefire in the Mariupol sector five times in various areas. “For instance, militants shelled our positions with mortar fire in Shyrokyne,” said Col. Motuzyanyk.

According to the Chief Intelligence Department of the Ministry of Defense of Ukraine, militants received another batch of reinforcement from Russia. “Four fuel-servicing trucks, three trucks with ammunition and two UAZ vehicles came to Amvrosiivka, and an echelon carrying 320 tons of diesel fuel arrived at Ilovaisk railway station,” elaborated the spokesman. According to him, due to revelation of the facts of Russian interference with the war in the east of Ukraine and substantial incurred losses, command of so-called “1st and 2nd army corps” of the Russian occupational army received an order to reduce the number of Russian career soldiers at forward lines of defense to 20%. “Forced draft for military service is in progress on the temporarily occupied territories at present,” added Col. Motuzyanyk.

Officers of the Security Service of Ukraine jointly with military procurator’s office and management of state enterprise detained two persons in Mykolaiv. They planned to sell to Russia spare parts for gas turbine engines designed for military use. “Russia cannot produce these components. The deal value amounted to 29 thousand USD,” said the spokesman.