Kyiv, April 30, 2016. No violations of the armistice were recorded in the Luhansk sector in the ATO zone yesterday. “Stanytsia Luhanska crossing point resumed its work this morning. The crossing point will be working until May 11,” informed spokesman of Presidential Administration on ATO-related issues Colonel Andriy Lysenko at a press briefing at Ukraine Crisis Media Center. 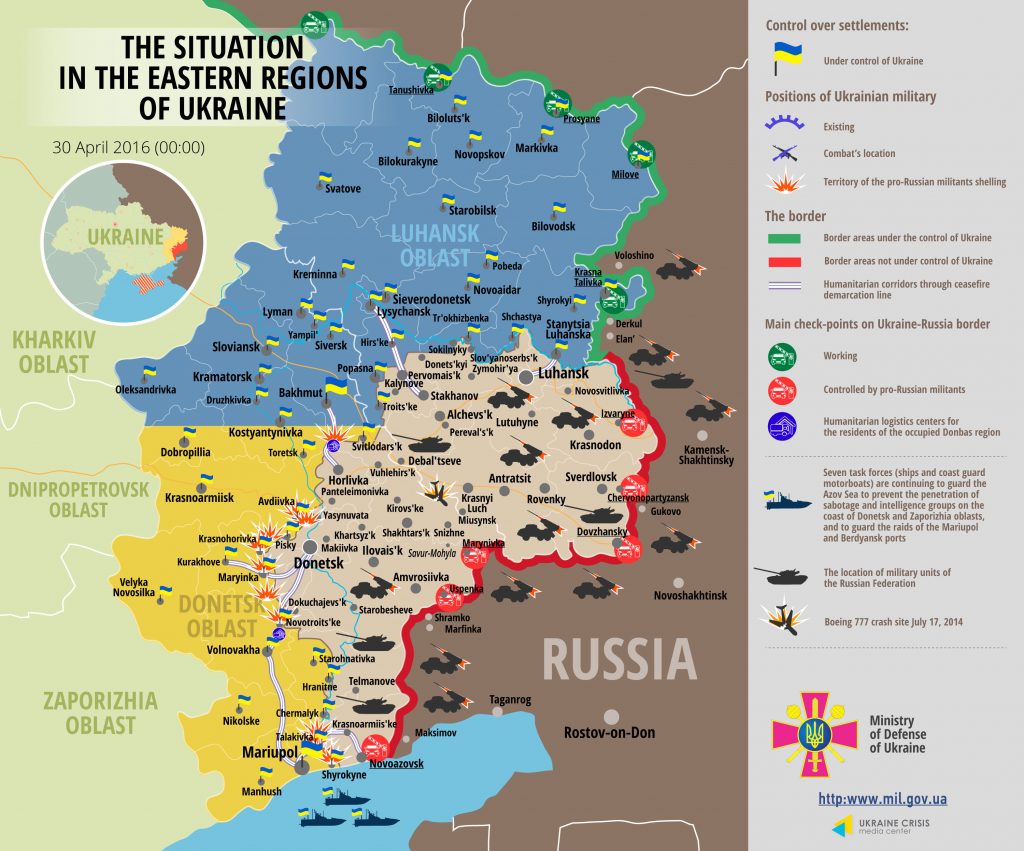 Militants shelled ATO troops’ positions in the Mariupol sector 33 times in the 24 hours. “Militants are actively using mortar launchers along the entire frontline, as well as snipers, first of all in Mariinka. The situation is quite restless; some checkpoints are shelled six times a day. ATO troops are made to respond with fire,” informed Col. Lysenko.

Militants conducted seven intense attacks in the Donetsk sector in the afternoon. “Occupants used mortar launcher during each attack, launching over 80 mortar shells at Ukrainian positions,” said the spokesman. “The armistice held only at the Svitlodarsk bulge. On the contrary, the enemy delivered dense fire in other areas (Zaitseve and the vicinity of Donetsk)”.

Two Ukrainian servicemen died in combat yesterday and four were wounded. Moreover, a civilian was wounded, tripping a mine near Novobakhmutivka in Yasynuvata district, Donetsk region.

Law enforcements detained a former militant with nom de guerre ‘Yakut’ in Kramatorsk. “The man was working in Moscow, where an acquaintance of his recruited him. Following this, he was enlisted as a scout at the self-proclaimed “Donetsk People’s Republic” (“DPR”),” said Col. Lysenko. Recently ‘Yakut’ came home to Kramatorsk, where he was detained.