Ceasefire holds in Luhansk region, while in Donetsk region Svitlodarska, Adviivka and Mariupol sector are shelled at.

Kyiv, May 5, 2016. Ukrainian Armed Forces incurred no losses in the ATO zone in the past 24 hours. Two troops were wounded as a result of tripping anti-personnel mines during bomb search near Slavne village in Mariinka district, Donetsk region, informed the spokesman of the Presidential Administration on ATO related issues Colonel Oleksandr Motuzyanyk at a press briefing at Ukraine Crisis Media Center. “Donetsk doctors are fighting for the troops’ lives now,” he added. 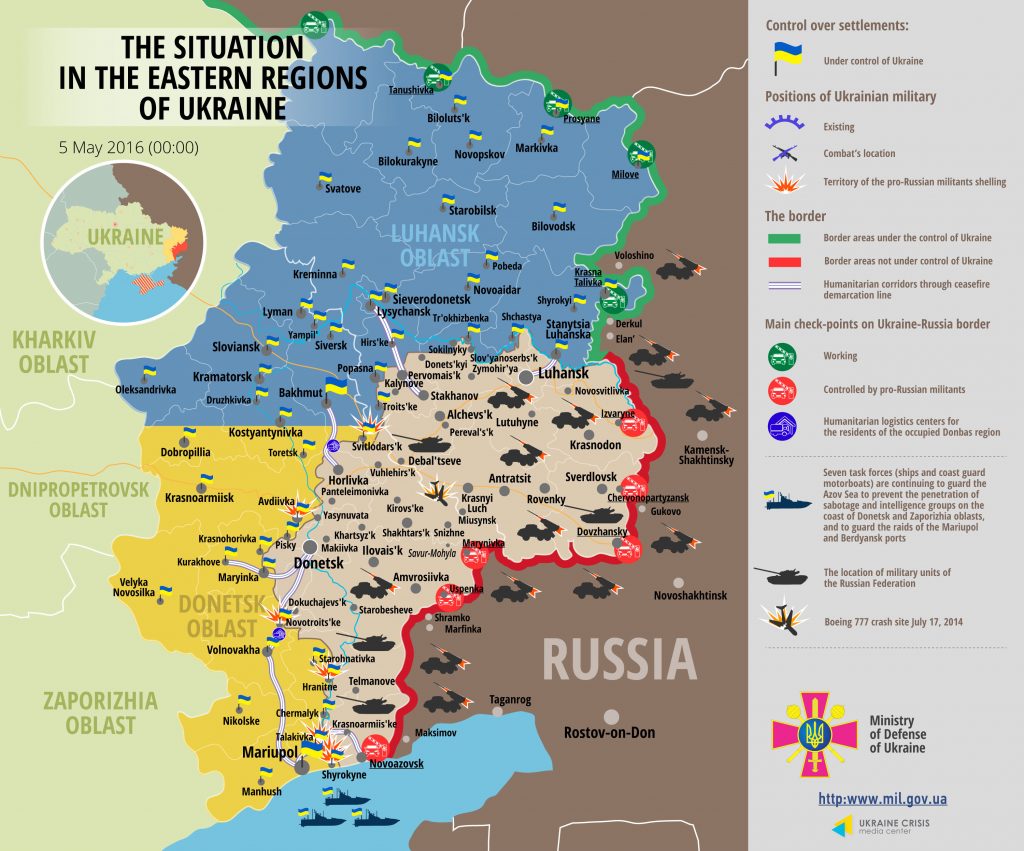 According to the spokesman, frontline areas at the Svitlodarsk bulge and near Avdiivka remain the main flashpoints in the Donetsk sector. “Militants were using grenade launchers of various systems and small arms during hours of darkness yesterday,” said Col. Motuzyanyk. The armistice exemplarily holds in the Luhansk sector.

The situation in the Mariupol sector is more complicated. The enemy launched 20 mortar shells from 82-mm mortar launchers at Ukrainian positions near Hnutove. A number of hostile armed provocations were registered in Novotroitske, Hranitne and Shyrokyne,” said the spokesman.

According to Col. Motuzyanyk, two militants more came back home, having joined the program of the Security Service of Ukraine “You are waited for at home”. One of them joined the ranks of militants in April 2014. He was keeping watch at checkpoints, checking documents and vehicles of civilians and cooked food for militants. “Later the man fled to Russia where he was hiding from punishment. Having heard of the program, the man returned to Bakhmut and surrendered to law enforcement officers. He agreed to cooperate with the investigators,” informed the spokesman. Moreover, Lysychansk district court released another militant from criminal liability. He was a member of a Russia-backed militant group of the self-proclaimed “Luhansk People’s Republic” for 18 months, starting in November 2014”.