Kyiv, May 15, 2016. “No Ukrainian military was killed over the past day of hostilities; 2 servicemen were wounded near Avdiyivka,” informed Col. Oleksandr Motuzyanyk, Presidential Administration spokesperson on ATO related issues, at a press briefing at Ukraine Crisis Media Center. According to the Ukrainian intelligence, two soldiers of the two so-called “brigades of the 1st army corps of the DPR” were killed and five – wounded. 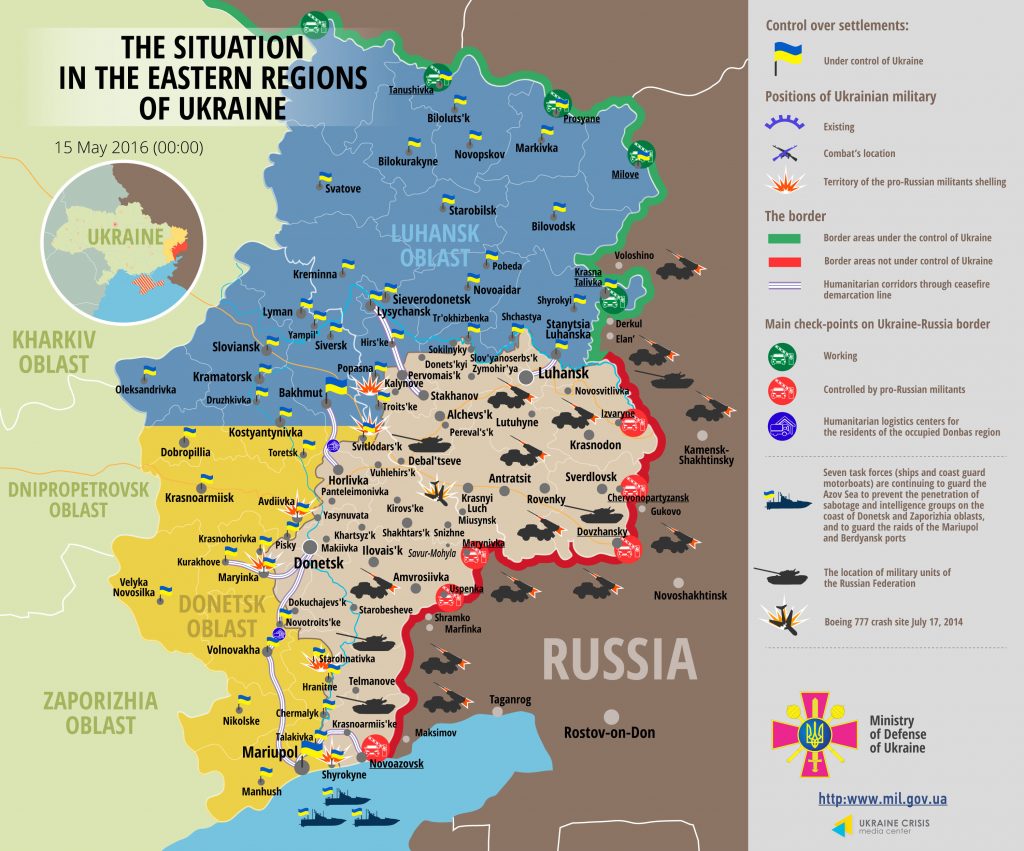 Over the past day illegal armed groups fired 7 times at Ukrainian positions in Donetsk sector near Luhanske and Avdiyivka. They used mortars several times. In Mariupol sector militants violated the ceasefire in Maryinka, Novohryhorivka and Shyrokyne. “The invaders repeatedly used infantry combat vehicles, mortars and sniping fire. All in all, over the past day enemy applied fire eight times in Mariupol sector,” informed Oleksandr Motuzyanyk. In Luhansk sector militants carried out one provocation in Popasna region.

In Kramatorsk the police detained a 23-year-old local resident, former militant. In April-May 2014, when Kramatorsk was controlled by the so-called “DPR”, he kept watch at the militants’ checkpoint.

Oleksandr Motuzyanyk also informed that for the first time in Ukraine instructors for the Special Operations Forces (SOF) were trained. “29 Ukrainian special operations soldiers completed a six-month course in Khmelnitsky. They were trained by military experts of the armed forces of the United States and the Baltic States. The graduates will lay a foundation of the new school of special operations soldiers and will join the SOF of the Armed Forces of Ukraine,” noted Presidential Administration spokesperson on ATO related issues.