The adversary employs heavy weapons; the number of wounded Ukrainian soldiers is highest over past two weeks. Intelligence reports loose discipline in the ranks of militants, resulting in so-called “friendly fire”.

Kyiv, May 18, 2016. Over the past 24 hours the  Russia-backed militant groups shelled the positions of Ukrainian soldiers within the Mariupol sector of the ATO zone, namely nearby Dokuchaievsk, Pavlopil and Shyrokine. “The adversary is actively using heavy weapons: the day before the militants shelled our positions with 40 mortar mines and 70 artillery shells of 152-mm caliber. Overall over the past day 10 cases of hostile shelling have been recorded, six out of these – mortar and artillery attacks,” informed spokesman of Presidential Administration on ATO-related issues Andriy Lysenko at a press briefing at Ukraine Crisis Media Center. 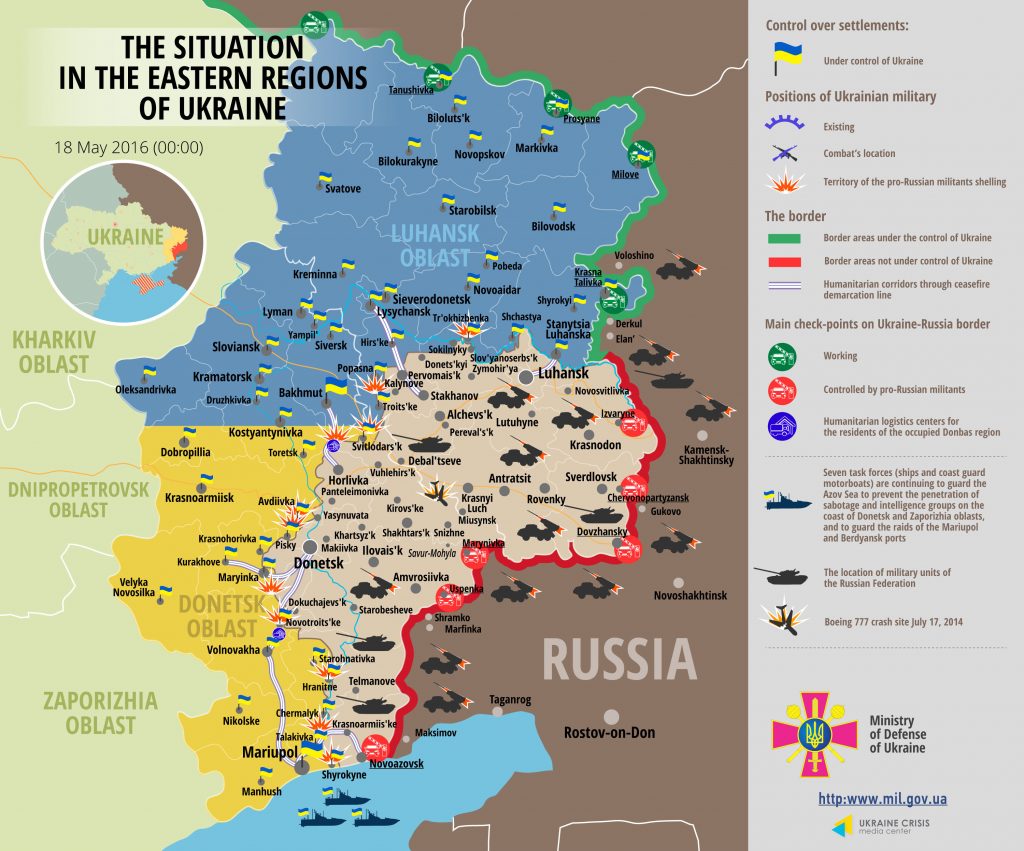 Yesterday in Donetsk sector insurgents shelled eight times, three out of which with the use of mortars. Main “hot spots” were Zaitseve, Avdiivska and Opytne. In Luhansk sector Russia-backed violated ceasefire five times in different areas along the contact line – in Stanytsia Luhanska, Tryokhizbenka and Novozvanivka. “Check point in Stanytsia Luhanska also came under fire,” added the ATO spokesperson.

No Ukrainian servicemen died in combat in the past 24 hours, but 10 troops were wounded. “Ukrainian Armed Forces incurred these losses in the Donetsk and Mariupol sectors along the entire frontline,” informed Colonel Andriy Lysenko, Presidential Administration spokesperson on ATO related issues, at a press briefing at Ukraine Crisis Media Center. According to the Chief Intelligence Directorate of the Ministry of defense of Ukraine, nine militants died in the last two days and 14 were wounded. For instance, it is known that four wounded militants were admitted to special hospital department for Russian troops on May 16. Moreover, three died and five wounded militants from so-called “11th separate motorized rifle regiment” were brought to Donetsk central city hospital on May 17.

The Security Service of Ukraine detained an inhabitant of Triokhizbenka village armed with a grenade. “This took place directly before an attempt to blast the grenade in a crowded place,” added Col. Lysenko. The woman admitted she was collecting information for militants regarding manpower and combat equipment of ATO troops, tried to recruit Ukrainian soldiers and was preparing to commit several sabotage attacks on the territory of Luhansk region. Another man suspected with cooperation with militants was detained at Taniushivka checkpoint in Luhansk region. Moreover, Col. Lysenko informed that law enforcements found 63 boxes containing tank projectiles near Nevelske, Yasynuvata district in Donetsk region yesterday.