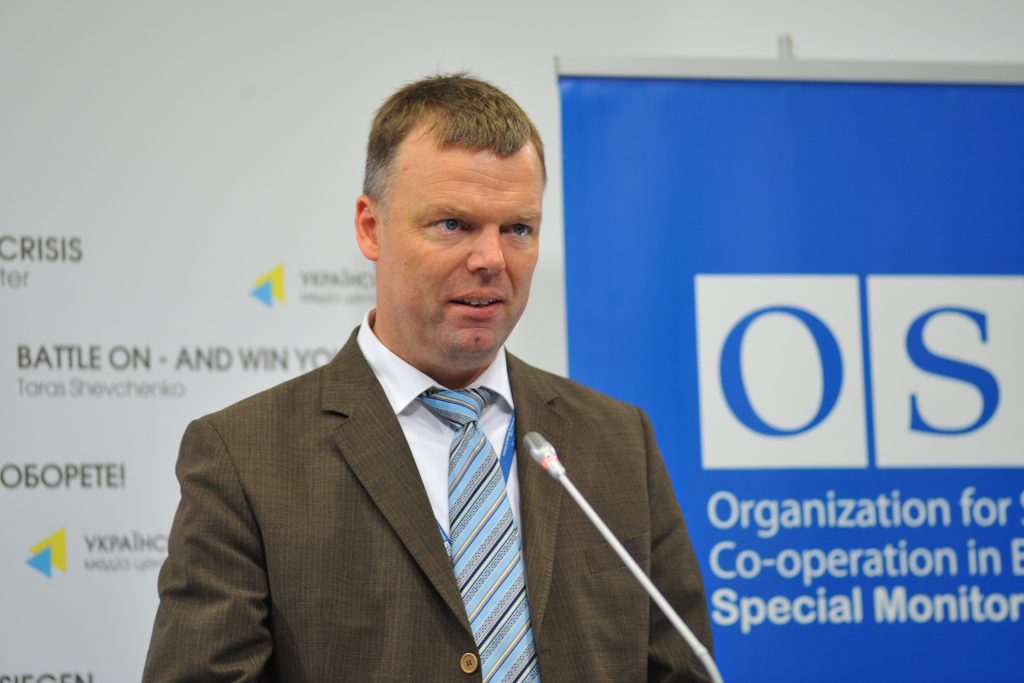 Kyiv, July 22, 2016. Last week the OSCE Special Monitoring Mission (SMM) monitors reported the highest number of ceasefire violations in Luhansk region since autumn 2015. The main hotspot there is the area of the Stanytsia Luhanska bridge, where the sides remain dangerously close. “On Monday night our monitors heard over 70 explosions and continuous firing over the course of three hours. Fighting in the same area was also recorded on Tuesday night, with hundreds of shots and dozens of explosions heard in just one hour,” stated Alexander Hug, First Deputy Chief Monitor of the OSCE Special Monitoring Mission in Ukraine, at the press-briefing in Ukraine Crisis Media Center. On Monday, the crossing point on the bridge was temporarily closed due to a fire. He also informed that the last three nights of last week were marked by violence in the area of Shchastia. “The most violent clashes were recorded on the night of July 16 when our monitors heard some 90 explosions, most of which were assessed as mortar rounds,” explained Alexander Hug. He added that on Tuesday the monitors saw eight multiple-launch rocket systems in violation of withdrawal lines in government-controlled Kalynove and near Makedonivka. Last week they saw within the security zone 11 artillery pieces in a number of areas controlled by the so-called “Donetsk People’s Republic” (“DPR”).

Alexander Hug stressed that increase in violence caused death and injury of several civilians in Staromykhailivka, Zaitseve and Avdiivka. On July 20 a 19-year old young man was shot in Avdiivka in the yard of his house located in the vicinity of active hostilities area Tuesday, shelling damaged the main power line between Makiivka, Yasynuvata and Avdiivka that supplies Avdiivka city, Avdiivka coke plant, and the Donetsk water filtration station. The SMM coordinated a local ceasefire and sent patrols to monitor the adherence to that ceasefire in order to ensure safe reparation of the power line.

The First Deputy Chief of the OSCE SMM informed that the SMM monitors continue to face restrictions of access. “In Luhansk region, like last week, most restrictions happened when approaching the Stanytsia Luhanska bridge as we attempted to access the bridge every day. We addressed the issue to the various levels of the Joint Centre for Control and Coordination, but nothing changed. […] The Centre continues to fall short of expectations in performing its functions”, Alexander Hug emphasized.

At the press-briefing Mr. Hug also condemned the murder of the journalist Pavel Sheremet. “Media freedom is critical to the future of Ukraine. Independent and objective coverage of events, including those in eastern Ukraine, are an essential element on the path to normalisation,” stressed the SMM First Deputy Chief Monitor.