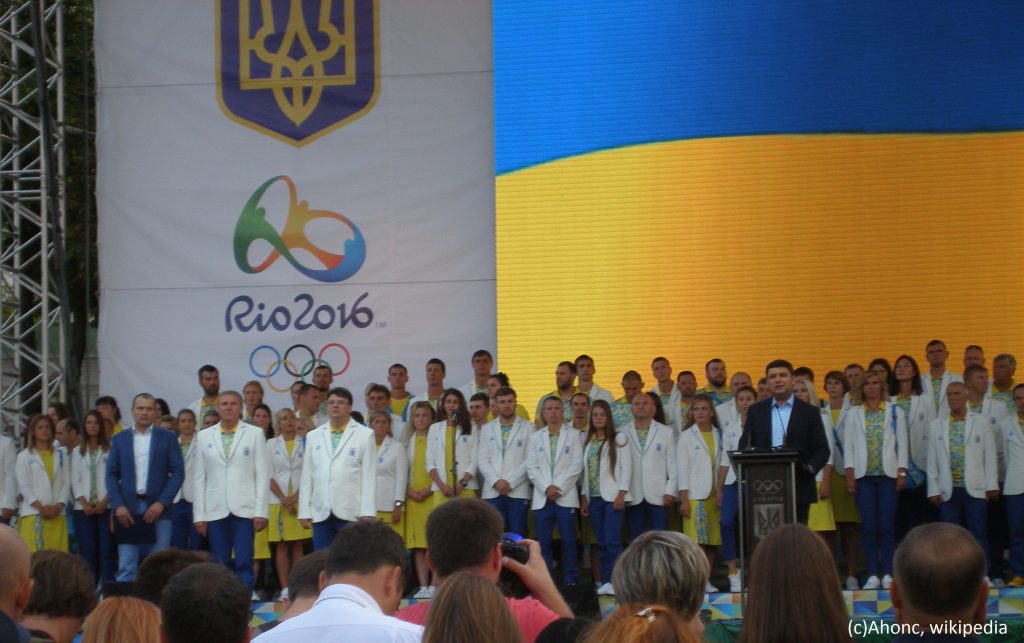 Before the start of the 21st Olympic games in Rio de Janeiro, Brazil, from the 5th to 21st of August, Ukraine Crisis Media Center has analyzed the medal chances for the Ukrainian National Team.  During this time of war, the Ukrainian team can give a reason to be happy to its supporters as seen from the previous honest accomplishments.  In this analysis, we looked at past performances, the internal sports arena in Ukraine and the partial disqualification of the Russian Olympic team as a result of the doping scandal.

In the hunt for gold

According to statistics, it is an exact science; if you correctly use its instruments correctly it is possible to predict the outcome of an event. Based on previous achievements of Ukrainian Olympians in international competition, we decided to try and predict how many medals and in which sports can the Ukrainian athletes receive.

The three absolute leading types of sports are athletics, gymnastics, and boxing. In all five previous Olympics, Ukraine has competed for medals in these sports.  In gymnastics, the favorite is male gymnast Oleg Vernyaev. It’s hard to even say in which disciplines Vernyaev won’t take a medal, as previous international competitions have confirmed. A gold can be expected in the uneven bars and the all-around, while a bronze is expected in the vault.  Additionally, we shouldn’t count out London medalist Igor Radivilov, whose vault has the potential to put Ukraine on the podium this year as well.

Then there is athletics, where Ukrainian Bogdan Bondarenko, with expertise in the high jump with a large collection of gold medals at the Universiade, European, and World Championship levels proving it. In addition, in June at the Diamond League Athletics Competition, the Ukrainian Women’s team not only took gold in the 4x100m relay, they also broke the competition record that has stood since 1988.

It’s no secret that Ukrainians know how to fight.  Maybe on the fields of France, the Ukrainian team should have been enhanced by a few fighters such as Zhan Beleniuk, with last year’s World Champion Gold as evidence.

Olga Kharlan and her sabre brought Ukraine an Olympic medal in individual competition at the London Olympic Games and a medal in team competition at the Beijing Olympic Games in 2008.  Rio is a good motivation to combine medals from both of these events into one Olympic games. Additionally, fencing has added medals to the Ukrainian medal count in the last three Olympics.

In shooting, Ukraine is also estimated to medal in where Olena Kostevych, who already has three medals (one gold), is expected to contribute in the team and individual competition.

There is also weightlifting, where the young Irina Deksa and the experienced Yulia Paratova without doubt will receive a medal, effectively keeping up the Ukrainian tradition of success in the sport.

We also cannot forget about boxing, where Ukrainians always show medals: 14 in the past five Olympics. However, the downside will be the absence of two previous World Champions due to their failure to receive licenses in their respective weight categories. Nevertheless, there will be worthy athletes representing Ukraine in the sport at the games. As shown in previous Olympics, we shouldn’t focus on just the traditional sports. Every Olympics, Ukraine has proven the ability to win a medal where they are not expected to; for example, in sailing, cycling and the high dive.

The eight-time Ukrainian record holder in swimming, Viktoriya Solntseva, had every chance to become the leader of the Ukrainian team at the Olympics in Rio: three medals from the European Youth Championships (two gold), two medals from the World Youth Championships (one gold).  Solntseva was 15 at the time.  The swimmer received a scholarship and the swimming federation offered a temporary relocation to America to train with distinguished coaches there.

The young athlete joined the national team and was noticed in the capital and she moved to the Kyiv Sports School in Poltava to change swimming coaches.  Her situation changed dramatically in the spring of 2014 when Solntseva and her team ignored the Ukrainian National Swimming Competitions for six months, bringing her new trainer into conflict with the Ukrainian Swimming Federation. The swimmer was training at the Olympic base in Yalta when the “Russian Spring” arrived in Crimea. “When the Russian military arrived in Yalta, we were very frightened. We gathered our things and left the peninsula.”  Viktoriya’s family and her coach, Sergei Bondar, moved to Turkey through Kyiv. And as if the situation in Crimea and Eastern Ukraine wasn’t enough, the underage swimmer changed her last name to Zeynep Güneş and received a Turkish passport a few days later.  However, this might look like a cheap sale of a perspective athlete; despite the fact that her school was located in the capital—far from the annexed peninsula and the war—where she was not threatened.  All doubts are dispelled in the past year as Russian and Turkish coaches have returned to the Ukrainian Swimming Federation. It can be assumed that this happened because of the sudden crisis in Ukraine that was provoked by the actions of Russia.

In December of 2014, for the first time since Solntseva moved to a new team, she competed at the World Championships, hiding discolorations. Viktoriya’s first trainer calls this an act a treason and parents exclusively blame swimmer and coach Sergei Bondar, without even taking into account the wishes of Solntseva, who was 16 at the time.

However, in August of 2015, Solntseva fully adapted to her new team and conditions, winning four gold medals for Turkey at the June World Championships.

The Ukrainian Federation began to sue the swimmer and even announced her ban from participation in Rio.  In accordance with Olympic rules, she would not have the right to compete in International competitions for three years. Yet, Solntseva will be in Brazil with the Turkish team and will enter the Olympic competition pool in August. Although Ukraine will have a reason to be proud if Solntseva wins any medals at the Olympics; however, it will be the fruits of another country.

The human mentality is too dependent on what we think about and its strength is proportional to how many people are watching us. Russia doesn’t have the right to shame themselves at the Olympics in eyes of the whole world. For a certain percentage of Russians, it is considered shameful to win any place other than first.  Furthermore, it is impossible to prevent the reoccurrence of Vancouver 2010-11 place. So thinks the Kremlin. For four years, Russia has jumped from 11th to 1st place in the medal standings.

In the spring of 2016, Russia’s Pandora Box began to crack when former director of the anti-doping lab, Rodhenkov, announced the existence of a State Supported doping program in Russia.  He said that he personally participated in over 100 doping tests during the Sochi Olympics that were done by the Russian Sports Ministry and the Federal Security Service (FSB). According to the data, 16 of these samples are medical.

Russia managed to avoid complete disqualifications from future Olympics, but the entire track delegation (except one athlete) has been disqualified and other sports federations have the right to exclude Russian teams from competition as well.  Now, instead of 400 athletes representing Russia, only 270 will head to Rio.  The reasons for such drastic changes come from the report done by the independent Canadian sports lawyer Richard McLaren for the World Anti-Doping Agency. McLaren’s report confirmed the substitution of doping samples in Sochi along with the participation of the sports Ministry and the FSB.

“We pay for these mistakes less, than the responsible athletes,” said multi-Olympic champion Elena Isinbaeva. She is part of the group that will not compete for a medal, but an athletics forum acknowledged the guilt of the athletes and the state.  In her face, Russia wants to show a biased attitude towards itself. “We today are faced with lawlessness and breach of trust from many people in the world of sports <…> Vladimir Vladimirovich, I ask you to protect us from this.”

The disqualification of a large portion of the Russian Olympic Team will not affect the success of Ukraine at the games, as the influence over athletes from this country don’t usually differ. Therefore, it could improve Ukraine’s medal standings by two or three medals.

Over the past five appearances of the Ukrainian National Team, they have never won less than 20 medals. The lowest number of medals received was at the London games in 2012, whereas the most successful games for Ukraine were the Beijing Olympics in 2008, where Ukraine won 27 medals. In the 1996, 2000, and 2004 games, the team was at a level where they brought home 23 medals every time. A similar outcome is expected in Brazil this year.

As far as medal standings, the best result for Ukraine was at the 1996 Atlanta Games, where Ukraine stood in 9th place overall. The worst showing for Ukraine was at the 2004 Games in Athens when Ukraine came in 21st. In the last three Olympics, Ukraine has finished just outside the top 10 (12, 11, 14 positions accordingly). Stability has been the calling card for Ukraine.

From the outside, it may seem the geopolitical crisis in Ukraine has affected all spheres of life; however, Ukraine has been accustomed to hard times. And now the Ukrainian boat embarks on the quest for medals under the Olympic flag, this time, on the Brazilian soil.