Kyiv, August 15, 2016. Militants continue to hinder the activities of the Special Monitoring Mission (SMM) of the OSCE. “On August 13, the militant leaders did not allow the monitors to visit the storage spaces of units of the so-called “2nd separate motorized rifle brigade” in Luhansk to conceal violations of the Minsk agreements. Obviously, they have something to hide,” informed Col. Oleksandr Motuzyanyk, Presidential Administration spokesperson on ATO related issues at a press briefing at Ukraine Crisis Media Center. This violates the Minsk agreements that clearly define the OSCE SMM mandate in the ATO area on the temporarily occupied territories. 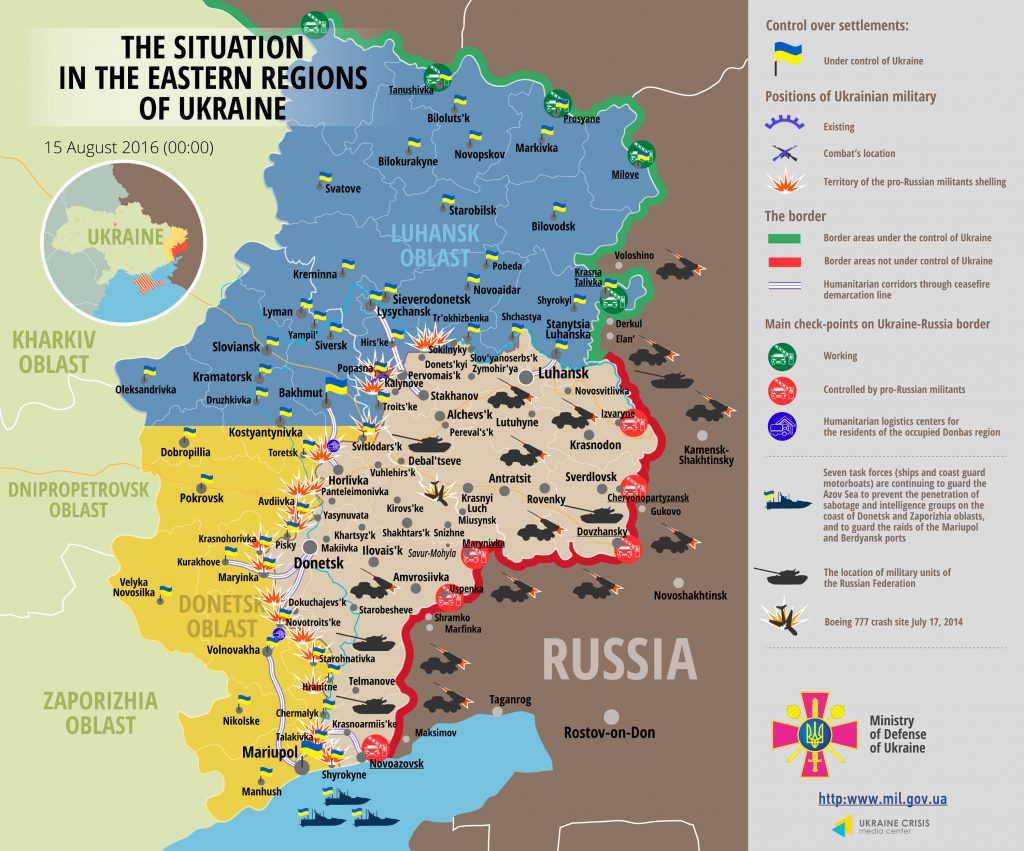 At 10 a.m. in Luhansk sector, Ukrainian military repelled the attack of a sabotage and reconnaissance group of militants near Novoaleksandrovka. The group approached the Ukrainian forces positions by 100 m. “As a result of a 20 minutes fight, two militants were killed. The enemy was forced to flee from the battlefield. None of Ukrainian soldiers was killed or injured. After the firefight the enemy tried to shot our soldiers with mortars, heavy machine guns and small arms,” informed Colonel Motuzyanyk.

Militants also launched six artillery shells from 122-mm cannons and three 120-mm mines near Popasna. Rare armed provocations were recorded near Krymske. The enemy sniper’s activity has been recorded for three days near Zhovte. All in all, militants violated the ceasefire 8 times in Luhansk sector, having used heavy weapons twice.

In Donetsk sector, intense combat operations persist in Avdiivka industrial zone. It is in this area that militants conducted half of their attacks, actively using mortars. 44 mines were launched at Ukrainian Armed Forces positions from 82-mm and 120-mm mortars. Militants also carried out mortar attacks near mine “Butovka,” Verhnyotoretske and near the village of Luhanske located at the Svitlodarsk arc. In these areas, as well as and near Mayorsk, militants fired from grenade launchers, machine guns and small arms. “All in all, militants carried out 23 shellings and launched 70 mortar mines in Donetsk sector,” added the spokesperson.

The largest number of attacks all along the front line is observed in Mariupol sector. This is the only area where militants opened fire from infantry combat vehicles near Maryinka, Vodyane, Talakivka and Shyrokyne. They also actively used heavy weapons prohibited by the Minsk agreements – heavy mortars near Maryinka, Taramchuk, Novotrojitske and Talakivka. Shelling took place around midnight in Novoselivka.  Militants launched 76 mortar mines and 5 artillery shells. Three more armed provocations with the use of small arms were recorded near Hnutove, Bohdansvka and Starohnativka. “All in all, in Mariupol sector, militants opened fire at the positions of our forces 28 times. It should be noted that at each section of the front the Armed Forces of Ukraine opened return fire if the lives of military were endangered,” noted Colonel Motuzyanyk.

Over the past day no Ukrainian soldier was killed; one was injured. Now the soldier is in Avdiyivka hospital. His health condition is satisfactory.

According to military intelligence, another reinforcement for militants arrived from Russia. Electronic warfare (EW) complex “Leer-3” used to prevent GSM-communication was redeployed to Donetsk. “Orlan-10” drones, which are part of this complex, create the required radio frequency interference. Russia redeployed five T-72 tanks to Makiyivka, and nine refuellers – to Mospyne. Besides, recently ammunition of the advanced units of the so-called “11th separate motorized rifle regiment” (Makiyivka) deployed near Donetsk airport was uploaded. Three trucks “Ural” with ammunition and four refuellers arrived to Novoazovsk.