Combined Russian and militant forces maintain a high intensity of attacks upon Ukrainian troops. In most areas, evening attacks on Ukrainian positions last longer and involve weapons of larger caliber than during the daytime.

Kyiv, August 17, 2016. Militants replenish ammunition on frontline positions near Pisky and Maryinka. “Russia delivered a consignment of ‘Shmel’ rocket flamethrowers with ammunition. Fifteen cisterns with fuel and lubricants have been transported to Rovenky and 10 railway carriages with ammunition arrived in Dovzhanske, where a border crossing point through the Ukrainian-Russian state border was operational before the war,” said Colonel Oleksandr Motuzyanyk, spokesman of Administration of the President of Ukraine on ATO-related issues, at a press-briefing at Ukraine Crisis Media Center. 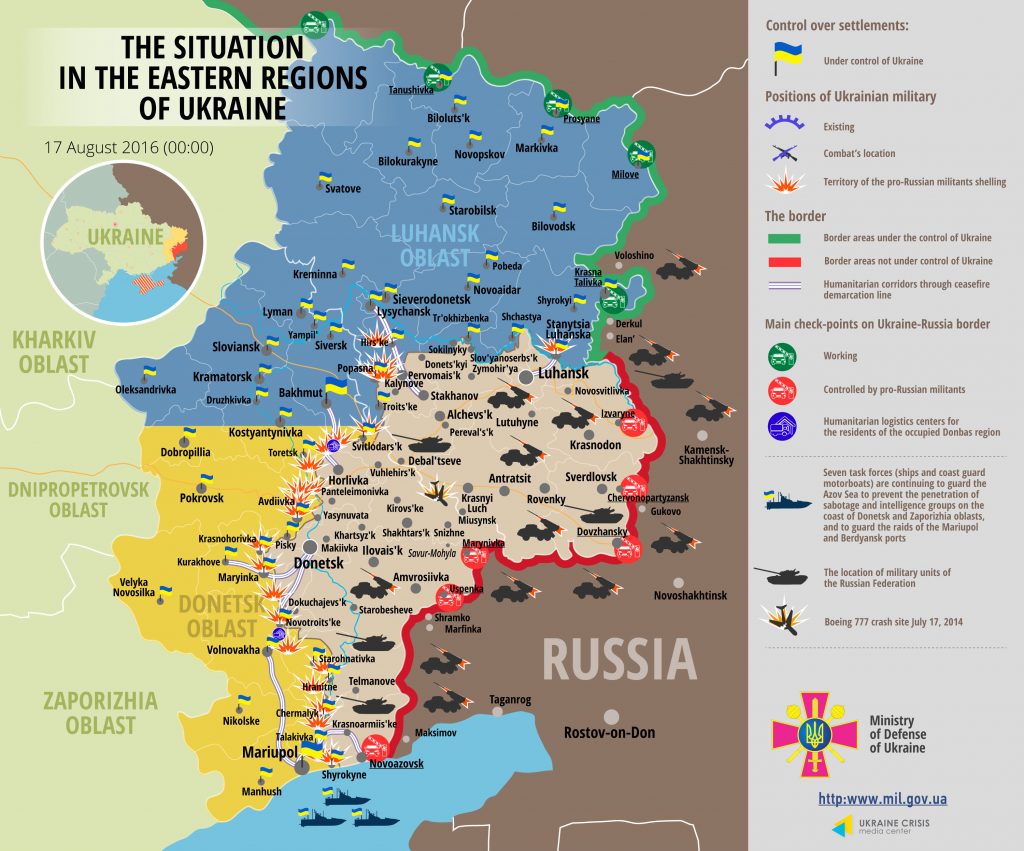 In the Luhansk sector, militants violated ceasefire agreements in two frontline areas: near Popasna and Stanytsia Luhanska. During the daytime, militants attacked the positions of ATO forces in Vrubivka, located north of Popasna, with artillery. Late in the evening, militant groups used an infantry-fighting vehicle in Popasna. “In Stanytsia Luhanska, the enemy intensified its activities after sunset and made three attacks that lasted over three hours in total. Heavy weapons were not used,” noted Colonel Motuzyanyk. There were a total of nine militant attacks in the Luhansk sector over the last day, one of them was made with 122-mm artillery.

In the Donetsk sector, combat actions are taking place along the entire contact line except for the Donetsk airport. Militants make sporadic provocations during the daytime and get active in the evening. Evening attacks on the positions of ATO forces last longer and involve weapons of larger caliber than during the daytime. “Mortars are being used more frequently in the evening. The same scenario is being observed along the frontline from Svitlodarsk to western outskirts of Horlivka,” said the ATO spokesman. Militants use a different tactic in Avdiivka’s industrial zone: attacks last longer regardless of the time and include the use heavy weapons openly during the daytime. ATO forces return fire. “A total of 23 attacks took place in the Donetsk sector yesterday, 12 of them were made with heavy weapons,” summarized Colonel Motuzyanyk.

Intensity of militant combat actions in the Mariupol sector has increased once again. Yesterday, militants made four artillery attacks upon ATO forces. The first attack took place in Maryinka at around 1:00 am. Yet another time militants used artillery against Ukrainian servicemen in Rybynske village, 7km to the east of Volnovakha. At 2:30 am, Russia-backed militants fired 122-mm artillery upon Ukrainian positions in Chermalyk. Militants fired about 60 shells in one hour. “The enemy fired with artillery upon Ukrainian positions in Novoselivka. The adversary fired over 130 artillery shells and 80 mortar mines in the Mariupol sector yesterday. There were a total of 20 attacks by militant groups in the Mariupol sector yesterday, with half of them made with the use of heavy weapons,” summarized Colonel Motuzyanyk.