Kyiv, September 24, 2016. The Security Service of Ukraine and the Armed Forces of Ukraine found three militants’ anti-personnelmines in Mariinka and Novoazovsk districts of Donetsk region. International legislation prohibits the use of these weapons, informed Colonel Oleksandr Motuzyanyk, spokesman of the Ministry of Defense of Ukraine on ATO related issues at a press briefing at Ukraine Crisis Media Center. “Two of these mines are PMN-2 types, also known as a “Black widow”, and one is POM-2 mine. It’s not the first case of prohibited weapons used by Russian terrorist troops, which is the evidence of the enemies disregarding any commitments they had taken,” said Col. Motuzyanyk. 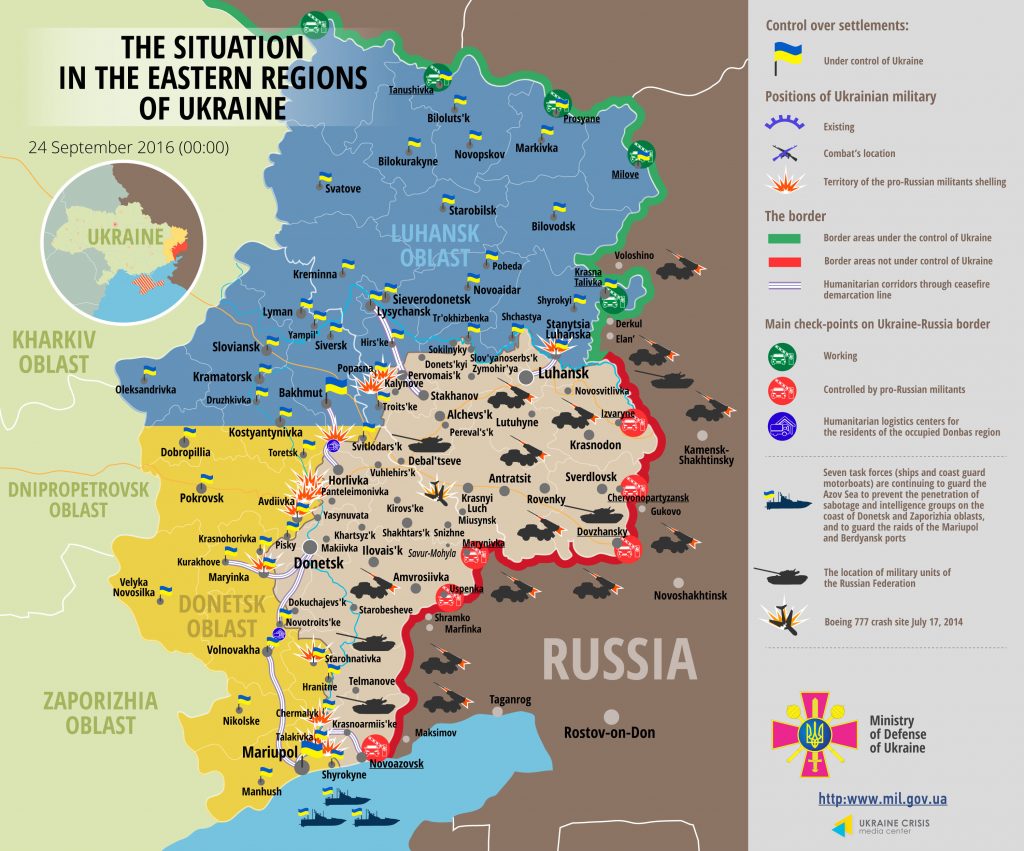 Russian proxies launched five mortar shells in the vicinity of Zaitseve and Novoselivka Druha in the Donetsk sector. “The enemy actively used light weapons near Avdiivka and Verkhniotoretske. One armed provocation took place near Novoselivka. Two thirds of militants’ provocation in the Mariupol sector took place in the vicinity of Mariinka. Sporadic ceasefire violations were registered near Talakivka, Vodiane and Starohnativka, and a hostile sniper was working near Pavlopil,” elaborated the spokesman.

According to the Chief Intelligence Directorate of the Ministry of Defense of Ukraine, another rotation took place in the militants’ ranks. Subdivisions of the 604th Special Operations Center “Vitiaz” of the Federal Troops of the National Guard of Russia arrived to Yasynuvata area from Balashykha in Moscow region. “Moreover, military intelligence reports another militants’ attempt to reduce international observers’ efforts to nothing. Following the statement of OSCE SMM monitors, militants cleared an area near Styla village of mines. Briefly afterwards, on September 22, following Russian command’s order, militants mined this area again, exposing local inhabitants to fatal danger,” informed Col. Motuzyanyk.